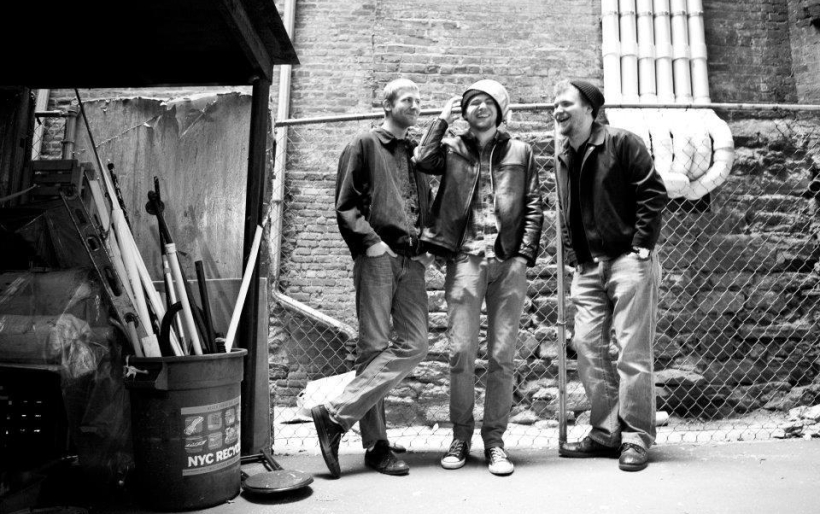 Unlocked: Talking mythology, death and the blues with Penrose

On Tuesday, Philly three-piece Penrose released its latest record, Circe, and we’ve been exploring it all week on Unlocked. The album digs deep into themes of good and evil, life and death, all rooted in a loud electric blues style – and its release is being celebrated Saturday night at Underground arts. We swapped e-mails with the three brothers of the band – Dan on guitar and vocals, Tom on drums, Pat on bass – to get their thoughts on recording the album, playing live and writing a manifesto of mythology and existentialism.

The Key: The biggest thing that jumps out about Circe is that death comes up a LOT. That’s what “Life of Mud” is all about, it’s also an undercurrent of “Underground” and “Rivers to Hell.” You focused on dark things on your debut Devil’s Grip, for sure, but why death this time?

Dan Murphy: I think that on Devil’s Grip a lot of the lyrics were written very quickly and focused more on relationship problems or even just simple storytelling. The writing process for Circe took much longer because I wanted to focus on more universal themes through the narrative that the album presents. Nothing is more universal than death, we all gotta go sometime and that very thought scares the hell out of most people.

TK: You work in interesting themes, as far as blues music goes. Very existential, very philosophical, lots of good-versus-evil rather than “woe is me.” What draws you to focus on the bigger things?

DM: It was a few years ago that we really immersed ourselves in and came to love the blues, which is what shaped Devil’s Grip. That being said, the blues is a genre that’s been played for about a hundred years, so if you want to play blues music you have to change it up somehow. I think that guys like Robert Johnson and Skip James were pointing to a lot of these bigger things, but they were doing it with lyrical motifs that would eventually be beaten into the ground. That’s why I think we wanted to get away from the “my baby left me”s and step outside to find something more personal yet more relatable to the human experience.

TK: Between your first record and this one, you performed a lot – between New York, Philly, and the surrounding region, as well as on tour. How did that shape the sound of this album?

Tom Murphy: What really emerges from playing around so much is just trying things out and seeing what does and doesn’t work. If things didn’t come together on stage like we thought they should, we’d go back and work the song out until it did. A great example is “Life of Mud”. Something always felt off about that song and we addressed it in the studio. Some songs just flow after the first take, but that was one that we had to sit down with for weeks until we felt comfortable playing it. So all the rehearsing and playing gave us a clearer idea of what the record should come out like, and I think that made for a more cohesive album.

TK: What was your experience recording with Bill Moriarty like? The record sounds great, so it was obviously positive in the end, but how was the road getting there?

TM: Working with Bill was really great.  When Dan started writing the skeleton of the record last year, Lynne [Krohn, manager] and I started basically “shopping” around for producers to help us with the project.  We met with a lot of great people with some serious backgrounds in music, but Bill really stood out as a guy who seemed to get us and get what we were going for.  We were sold after the first meeting.  I mean, we were probably sold before that.  My iTunes reads like Bill’s resume’, so really we were honored when he reached out to us.  I remember seeing the e-mail and sending a text to Pat and Dan like “THE GUY WHO DID THE MAN MAN RECORDS WANTS TO WORK WITH US!”

The cool thing about working with Bill is that Bill’s a guy who is going to protect you from yourself. We never really had anyone say “no” to us in the studio before Bill, and that’s exactly what we were looking for.  When we were writing this record we knew we had some good ideas but we also knew we couldn’t flesh it out on our own, and that’s where Bill came in.  He was great about nudging us in the right direction when we needed it, without shattering our fragile egos.  We really can’t wait to work with him again.

TK: Okay, time for a quick Wikipedia check – Circe is the Greek godess of magic who turned those who offended her into animals. She also murdered her husband and was well versed in drugs and herbs. How did Circe become the namesake of your record?

DM: It was actually Tom’s idea to name it Circe. Within the narrative of the album, the event that starts the protagonist’s journey is a breakup with a lover, and he can’t help but think about her throughout the entire story. Circe was famous for “turning men to swine”, not to mention that the word “circus” originates from her name, and there’s a couple spots on this record that feature circus music. I also think that by referencing the Odyssey, the title tells the listener a bit about what they’re getting into, as the story is itself a somewhat twisted odyssey towards self-discovery for the narrator.

TK: I’m really glad “Underground” made the cut on the album – I was impressed when you recorded it during your Key Session a couple years back. It’s a long song with lots of twists and turns, but reads almost like a mission statement. Was it a tough decision about whether to include it or not?

DM: It was a while ago, but if memory serves me right, “Underground” was the first song that was actually intended for the record. It served as a good starting point for the very reason you present: it reads like a mission statement. Pretty much all the themes and problems that the record presents are summarized in “Underground,” and I think the album would be incomplete without it.

TM: The way it came together back when it was being written, we had what we termed “the medley” which comprised “Underground,” “The Passing,” and Eulogy which are tracks 9, 10, and 11 on the record.  As you saw on Devil’s Grip, we have a sort of penchant for really long, three part songs a la “Suite for Stack.” This was in a similar vein, but ultimately we decided to cut them into three different tracks.  An important thing for us in the studio though was to have seamless transitions, so that if you were listening to the record straight through, these songs would all kind of mesh.  We decided that was actually a good approach for the whole record, so we tried to record in such a way that someone listening might not always realize where one song ends and another begins.  With this one, we just really love the idea of a cohesive, fluid Album with a capital A.  I think that idea started with “Underground” and the songs right after it.

Pat Murphy: And I think that’s one of the greatest ways Dan’s songwriting has developed. While Devil’s Grip was a collection of similar songs this really is a cohesive Album. Circe starts in one spot and ends in a completely different one, but with a journey in between that takes you there. As we’ve been working on it I’ve been most impressed with how each song moves you to a different point in the journey and that makes the album flow so well.

TK: You’ve knocked out a lot of really strong cover versions and interpretations over the years – “Suite for Stack” being a big one. Anything you’ve been covering lately that we can look forward to at the Underground Arts album release?

TM: I can tell you the answer is yes, but you’ll have to come to the show to find out…

Circe is the featured album in this edition of Unlocked; hear the spotlighted single “Life of Mud” in Monday’s post, read Tuesday’s album review, watch a live version of “Not Fade Away” in yesterday’s post and check back tomorrow for a Penrose-curated Spotify playlist.