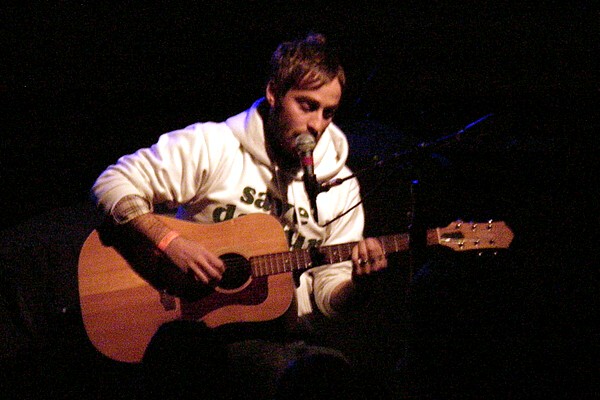 Photo by Abi Reimold | JumpPhilly.comThough he wasn’t performing in the sanctuary or the chapel, Mike Kinsella kept it intimate in the basement of the First Unitarian Church last night. His hour-long solo acoustic set under the Owen moniker opened with “A Trenchant Critique” from 2009’s New Leaves, prompting the fanboys in the audience to gush audibly about Kinsella’s voice, describing it as “pretty butter.” It’s true; the man has the voice of an emo angel.

Acting as if he was playing for a small crowd (instead of the few hundred squeezed in the room), Kinsella asked if we wanted to “talk about anything” as he slugged a Kenzinger. After some murmurs from the crowd, he segued into “Oh, Evelyn…” from  2011’s Ghost Town and then “She’s a Thief” from 2004’s I Do Perceive, which complemented each other beautifully. The two songs highlighted some of the best work from his early and present career.

“Bad News” was dedicated to a member of the audience, Cody, whom Kinsella acknowledged for being genuine. “Thanks man,” Cody shouted afterwards. “That made me cry!” A song later, Kinsella’s guitar string broke and he offered to end the show early, or fix it. The church pumped intermission music while Kinsella tended to the string. Finishing up with a new track entitled “I Got High,” and then “Good Friends, Bad Habits,” Kinsella wished his audience well as they funneled out of the basement and into the night. See the setlist from the show after the jump.

Setlist
A Trenchant Critique
Broken Bones
Oh, Evelyn
She’s a Thief
The Sad Waltzes of Pietro Crespi
One of These Days
A Bird In Hand
Love Is Not Enough
Bad News
The Armoire
Ugly On the Inside
I Got High- new song
Good Friends, Bad Habits