From the Pages of JUMP: Thao and the Get Down Stay Down played Underground Arts - WXPN 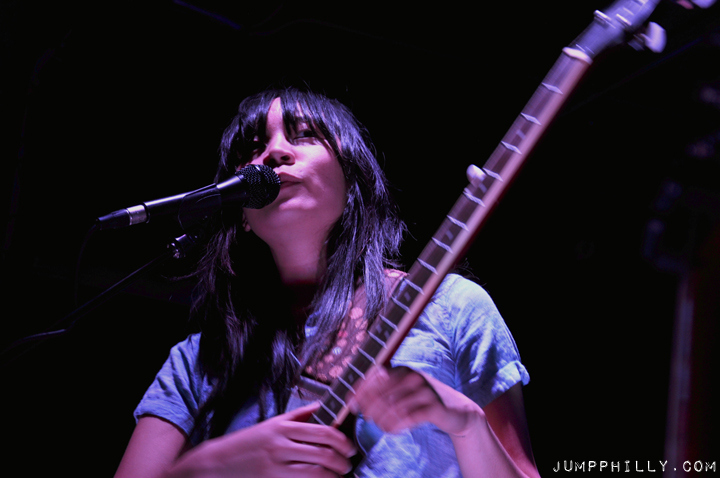 From the Pages of JUMP: Thao and the Get Down Stay Down played Underground Arts

Text and images by Greta Iverson.

Thao and the Get Down Stay Down returned to Philly this weekend for a well-attended show at Underground Arts. JUMP Philly writer and photographer Greta Iverson attended, and has this to report:

Thao Nguyen has been at the center of a couple of musical projects since she started her career. Nguyen performed as a solo act and a duo (with Mirah Yom Tov Zeitlyn) but Thao and the Get Down Stay Down, which put out their first album, We Brave Bee Stings and All in 2008, has caught fire.

They’re probably this popular because of how well they manipulate the indie-folk scene. Nguyen picks from a set of instruments that include a number of guitars, a mandolin and a banjo – all of which she plays masterfully. Nguyen, the bassist and guitarist incorporate a slide at some point during the show, bringing a sweet, bluesy feel to the otherwise mellow indie rock.

The majority of the set was from the band’s newest album, We The Common. Every song picked up some serious crowd-love but the song “We The Common” definitely took the gold for loudest audience sing-along. Nonetheless, the songs “ Every Body” (the opening song), and “City,” all from We The Common, got a ton of movement and smiles from the audience.

The band also played a few songs from older albums, including “Cool Yourself” and “Body,” from 2009’s Know Better Learn Faster.

The show did not seem to draw one specific demographic. A 50-something man in the front row sporting a “Delaware Dad” cap mingled with the 20-somethings around him, even if they were sporting Mohawks and thick-rimmed glasses.

The opening act, Sallie Ford & The Sound Outside (right) had a similar vibe to Thao and the Get Down Stay Down – upbeat indie music with a strong female vocal, an endlessly entertaining and enjoyable combination.

Despite not really knowing anything about them, I was pretty impressed by the energy they roused from the crowd. Everyone’s been to a show where the opening act is a little wrong and a little off, and it can be such a let down since whoever you’re there to see is probably pretty baller, but you have to sit through something that isn’t what you bargained for.

This was not the case. Sallie Ford & The Sound Outside was pretty dope and on-point. They played mostly songs from their February release, Untamed Beast, including “Addicted” and “Party Kids.”