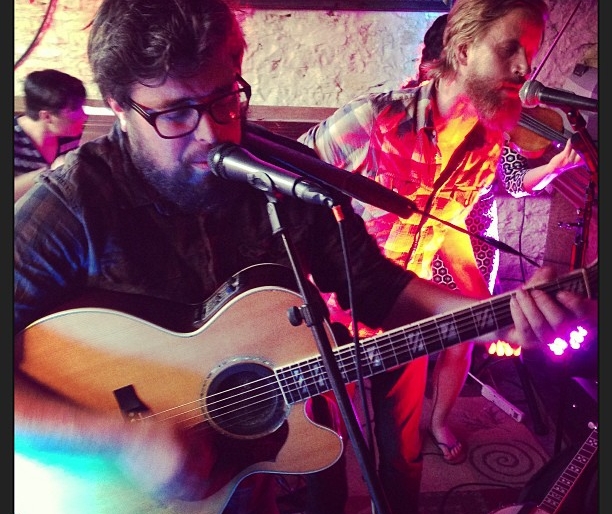 It’s been a little while since we brought you some free live local music here at The Key, so we’re pretty psyched to announce our latest installments of The Key Studio Sessions Live, happening at Lenfest Plaza at Pennsylvania Academy of the Fine Arts on Thursday, April 18th.

On hand we’ve got Wilmington folk-rock powerhouse New Sweden (pictured), alums of the Key Studio Sessions (download their appearance here) and two-time winners of Tri-State Indie’s Delaware Indie Band of the Year award. I caught their recently revamped lineup at South by Southwest last month, and their live set is smokin’ as ever. Expect some new material, a modest amount of fiddle and ample hooting and hollering from these folks.

Also on the bill is vocal force of nature Ali Wadsworth. You’ve seen her collaborate with many players in the roots scene – her old band Unlikely Cowboy, Toy Soldiers, Good Old War, Fantasy Square Garden, Aaron & the Spell and the list goes on – but her forthcoming solo debut is something just about all of those folks are anticipating. It is being recorded with prominent Philly producer Bill Moriarty, features Wadsworth singing music written by many of her friends in the scene, and is sure to be great.

Last but certainly not least is Joey Sweeney and the Long Hair Arkestra. Aside from his day gig running the city news and culture blog Philebrity, Sweeney has made a formidable return to the stage this year – he first performed as a teenager in the 90s, and went on to front The Trouble With Sweeney and others until about 2006. After a hiatus of about a half-dozen years, he began to make moves with his rock outfit Arctic Splash (including a Christmas Key Session), threw a 40th birthday celebration that reunited all of his old bands, and now is gearing up to release Long Hair, a long-in-the-works solo album exploring the more introspective side of his songwriting. For this show, Sweeney will perform with The Long Hair Arkestra, a band about whom we don’t know a ton, but we’re psyched to hear them play all the same.

The concert takes place from 6 to 9 p.m. at the Lenfest Plaza at the Pennsylvania Academy of the Fine Arts, 118 North Broad Street. Admission is free, but space is limited, so RSVP now at the XPN website.

Below, watch an acoustic performance of New Sweden’s “Mama,” watch Ali Wadsworth covering Beck’s “Eyes that Say I Love You” at the Song Reader show, and watch a trailer for Sweeney’s “Long Hair”