Hitting the road, indie-style: Cold Fronts' Craig Almquist on tacos, van life, and the three steps every band should follow before setting out on tour - WXPN | Vinyl At Heart

Hitting the road, indie-style: Cold Fronts’ Craig Almquist on tacos, van life, and the three steps every band should follow before setting out on tour
Artists

Hitting the road, indie-style: Cold Fronts’ Craig Almquist on tacos, van life, and the three steps every band should follow before setting out on tour

There are plenty of reasons for a band to head out on tour: the lure of the open road, the promise of new fans in new cities, the release that comes from jumping on stage and rocking out, after spending all day crammed into a van. And then of course, there are the pitfalls: constantly lugging around heavy gear and equipment, sleeping in the van or on strangers’ floors, getting lost or breaking down in strange cities with poor cell phone reception.

When it comes to both highlights and headaches, Philly’s Cold Fronts have experienced it all. The fun-loving foursome might still be up-and-comers on the local scene, but when it comes to hitting the road, they’re quickly becoming masters, having just completed their second, epic, month-long tour (with a stop at SXSW in mid-March), and already looking to book another. So how does an unsigned band with no manager, no PR firm, and no booking agent, manage to make it work?  I caught up with front man Craig Almquist to divulge his secrets—and share some of his most (and least!) fun moments of tour.

Listening to Cold Fronts’ music, one might initially be tempted to underestimate their drive: their debut EP, Pretty American, is filled with easy-going party jammers about crushes and heartache; on Facebook, they list their interests as “partying and pizza.” But just because they play hard doesn’t mean they don’t work hard too.

“We aren’t worried, we love to work,” writes Almquist over email, when I touch base a week before the tour to ask, Doesn’t 25 shows in a month seem overwhelming? “There’s always a turning point when you’re doing a lot of shows where you get into a rhythm and it becomes an exciting routine.”

Exciting if you know what you’re doing, at least. I asked Almquist what advice he’d give to a new band starting out on tour, and he gave me three suggestions…which should practically be required  knowledge for all bands setting out on the road. 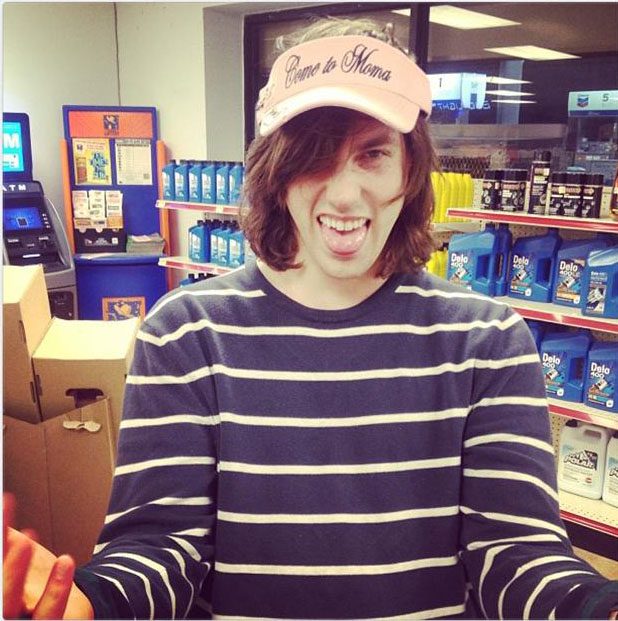 For Cold Fronts, it’s a standard 15-passenger, Dodge Ram Primetime in dark green—with a built-in divider half-way back, so that “if we crash, we don’t get whacked in the head by guitars…at least in theory.” A reliable van is necessary because of all the time one spends in the van…and because breaking down can mean cancelled or missed shows.

Also necessary is a belief in the van’s inherent magic, which luckily for Cold Fronts, comes naturally. “There’s something really fun about the van slowly becoming your home,” says Almquist, who also notes that all four band members split driving duties, and have been known to sleep in the van on occasion.  “It’s a special bond you form with your friends when you’re riding in the van together all day,” he continues. “And then there are those special trips that last 16 hours…”

On their recently-completed tour, the band drove from Illinois to New Orleans straight—a journey Almquist describes as “a real bitch.”’Sometimes you just have to slap yourself,” he says with a grin. Long journeys can also mean band member bickering (“Imagine you’re really good friends, and you live with someone…you’re bound to fight. So take that, then subtract all the space, and you have van life”) and the inevitable funky smells that arise from four guys sweating and eating Taco Bell regularly, and showering irregularly. And of course, even the most stalwart vehicles break down occasionally—a fate that befell Cold Fronts when leaving SXSW, forcing them to cancel an upcoming gig in New Orleans.

“That was a real low point for us,” says Almquist, who luckily, was able to get the van up-and-running shortly after with some help. “But we came out alive, so that’s what really matters.” 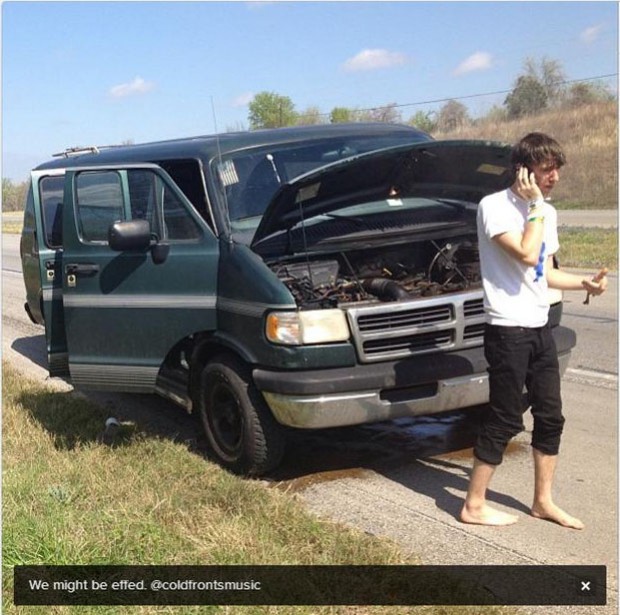 Broken down and calling for help. Via the band’s Instagram

Ten years ago, you could argue seeking sponsorships was akin to “selling out” for many indie bands, who were skeptical of forming alliances with corporations they feared would mis-represent their music. These days though, there are countless youth-oriented companies (like Converse, Vitamin Water, or Red Bell) with money set aside specifically for recording, or helping indie bands tour (kind of like unsigned band scholarships), and cashing in on these opportunities can be a great, practical way to manage expenses.

For their just-completed tour, Cold Fronts found sponsorship with Jansport after winning a battle of the bands; for their prize, the company covered tour expenses. The band also scored free Taco Bell through the company’s “Feed the Beat” program…which led to many a Crunch Wrap Supreme run (and unfortunately, Almquist tells me, those aforementioned funky van smells.)

So how does a band like Cold Fronts find sponsorships? “It’s challenging,” admits Almquist, who searches for companies he thinks share similar philosophies. “But it’s worth it not to have to worry—if only three people come out to a show, you’re not gonna lose any money.” 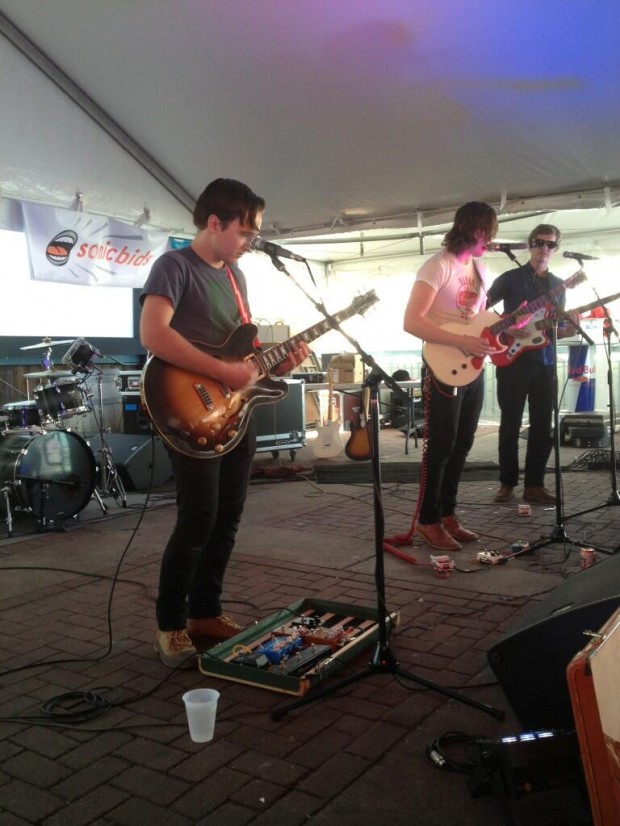 Cold Fronts jamming at Maggie Mae’s during SXSW, in a Jansport-sponsored show. Via Tilly’s Twitter (@Tillys)

On their most recent tour, Cold Fronts played 25 shows in 20 different cities: numbers Almquist would like see to climb even higher. Obviously, the more shows a band plays, the more exposure they receive…and the more connections they make with other bands and potential labels.

I ask Almquist about a particular big label executive, who I had heard the band played for at SXSW. Almquist is tight-lipped about the situation, but we’re hoping for an announcement soon. And when I ask him, if surely, the situation caused nerves, he tells me the group wastoo caught up in the excitement of the festival for it to really register.

“We were running on such little sleep and it was so early in the morning,” he says, admitting soon after that by “early in the morning” he means, in fact, 12 in the afternoon. “So we just treated it as a show in the middle of the night—we all took a shot, grabbed a beer, then headed on stage.”

The band’s fave SXSW moment occurred just hours later, when they were spontaneously added to a Creep Records showcase, courtesy of their friends in Conversations With Enemies.

“It was the last day of the festival, and we actually had another show scheduled for earlier that day,” explains Almquist. “But we ended up cancelling, just because we were exhausted, and because it was going to be so much of a hassle getting there and loading and unloading all our gear. So we thought we had the afternoon off, and were just relaxing—and then we finally ended up playing a set at midnight. But it was such a fun show—we sounded tight, and we kicked ass.” We’re sorry that we missed it!

So how does one go about booking shows in a city they’ve never been to, or know which venues are legit versus lame?

“At this point, it’s really still a guessing game,” says Almquist with a smile. “On this last tour, we definitely played some questionable places. You just never know. Sometimes, you show up at a venue, and it’s packed with people, and the show is awesome; sometimes you’re playing to an empty room with three people, all of whom are in the other band. But as you keep going, you learn what types of venues are good bets. Colleges and basements are usually great; they usually have a solid fan base. But honestly, we’re still figuring it out.”