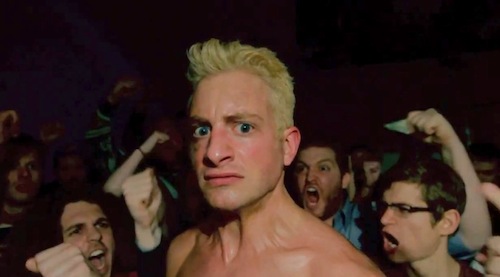 In addition to all the sweet synth-pop they’ve kicked out over the past year and change, the guys in Bucks County’s Night Panther have developed a formidable resume as character actors. First there was the video for “Fever,” which took generous cues from The Beastie Boys’ famed “Sabotage” clip and it’s 70s action film tropes (reenacted by the band itself). This week, we have another cinematic video for the song “Lioness” that moves in a decidedly Jean-Claude Van Damme direction.

Frontman Farzad Houshiarnejad plays a villainous Soviet boxer, while bandmate Christopher Radwanski appears as one of his doomed opponents and Michael Cammarata is a sensei residing in the snow-dusted forests of northeastern Europe – which, yeah, one of those you’ve-gotta-see-it things. Check out the video below and watch out for a less menacing Night Panther to appear live at Vacationer’s next Nude Beach party, happening May 10th at Underground Arts.