Earth Day: Looking back on Philadelphia's Earth Week in 1970 with the cast of Hair and Redbone - WXPN

Earth Day: Looking back on Philadelphia’s Earth Week in 1970 with the cast of Hair and Redbone
WXPN Local

Earth Day: Looking back on Philadelphia’s Earth Week in 1970 with the cast of Hair and Redbone

Today we celebrate Earth Day, an event that started 43 years ago. In Philadelphia it took the shape of an entire week long event, Earth Week, April 16-22. According to Earth Week 1970.org:

Motivated by national press coverage of a speech that U.S. Senator Gaylord Nelson gave in the fall of 1969 in Seattle—in which he called for a national “environmental teach-in” to call attention to environmental issues—a group of University of Pennsylvania Landscape Architecture and Regional Planning students decided in early 1970 to organize not just an Earth Day, but an entire Earth Week of activities.

The group called themselves the Earth Week Committee of Philadelphia. Austan Librach, a regional planning student, assumed the role of Chairman. Realizing that the ambitious Earth Week program would require a full time director and not wishing to drop out of graduate school themselves to manage it, the Committee hired Edward W. Furia, who had just received his City Planning and Law Degrees from Penn, to be Project Director. Within a few weeks the core group from Penn was joined in 1970 by students from other area colleges, as well as from other community, church and business groups which, working together, organized scores of educational activities, scientific symposia and major mass media events in the Delaware Valley Region in and around Philadelphia. 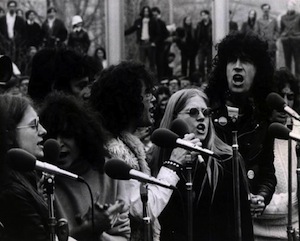 Earth Week culminated in several large gatherings on April 21st and April 22nd. The Cast of Hair, Sally Eaton (a cast member), and Redbone performed at Independence Mall on April 21st. April 22nd at Belmont Plateau the celebration continued with performances from Redbone, Eaton, The American Dream, The Great Speckled Bird with Ian and Sylvia, a speeche from Senator Edmund Muskie and appearances from Allen Ginsberg and Ralph Nader. Below, watch a report from CBS News with Walter Cronkite about Philly’s Earth Week. Go here for more videos about Earth Week 1970. Go here for more photos and information about the week.