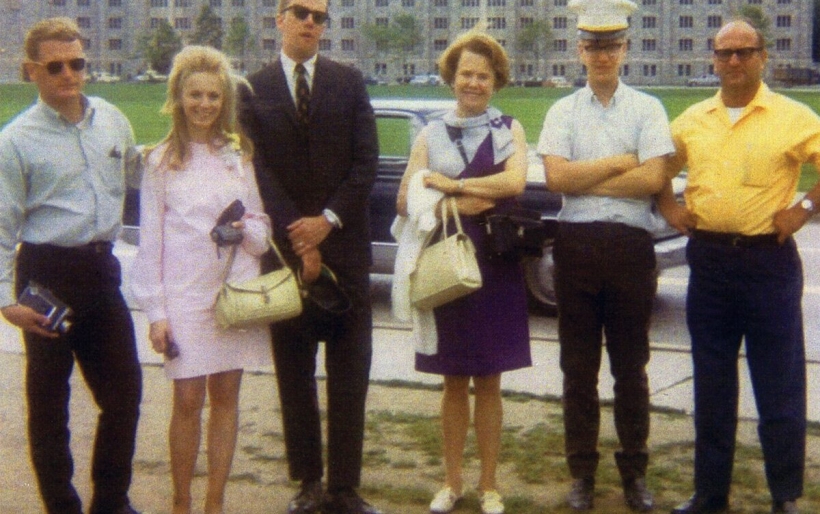 Several of the members of Grandchildren are artists in additional mediums besides music. Some of them went to school for painting, while frontman Aleks Martray studied film. Needless to say, the album art for Grandchildren is not a simple after thought and was conceptualized with a keen visual eye. This week for our Unlocked series we’re exploring Grandchildren’s new album Golden Age, and today we take a look at Golden Age’s nostalgic cover art with some commentary by Martray.

“Yeah I worked for months and months on album art, had a bunch of different drafts and ideas but nothing really worked.  I didn’t even have a grasp on what the album was about yet, but I think when I wrote “Golden Age” and realized what the album was all about, right away this little photo that I had found a few years back came into my mind. I thought, that’s it, no question, no intentions, that’s the image that all this music is about.

My grandfather passed away a few years back and I was in his house with my dad just cleaning it out, and I am kind of a history buff, particularly when it comes to my family history, so I was just collecting hundreds of photos that were all over the house, and out of these hundreds of photos I found this one photo and I never before looked at a photograph and in one second everything was just put into perspective and everything just made sense and was so clear. To me, I know all these people at an older age, so I could already see into their character, so it looked really true to life, but on the other hand, it looked like a staged photograph with costumes and blocking involved. But really it was just this moment in 1969 when my father had graduated from West Point where his family just stood there, and somebody took the picture.

I think it is a really intriguing image, and when somebody who doesn’t know these people sees it, it is even more powerful because they can inject it with their own experiences, their own ideas.  It is a very open photograph in a lot of ways.  I like anything that borders the line between fact and fiction, or reality and imagination, so for me, the photo is really powerful in that way.” “The back cover is at a place called Battle Monument, which is actually a Civil War monument. It is an outlook over the Hudson and I have dozens of photos and videos of myself hanging out there as a kid, but it’s at the same location where the front photograph was taken. It’s the idea that the front is a photo from 1969, and then the back is a place where I spent a lot of time as a kid in the 80’s. It was a weird, surreal place to grow up, because, it was a military base so I was surrounded by military culture and these monument cannons, but I would just sit on these cannons and look out over the Hudson. It was a really calm and beautiful place, and it was a weird paradox to have all this military culture in such a beautiful place when you are a kid.” “A lot of times when I talk about music I use this analogy of it being like a collage of all the places I have lived in my life and sort of like a soundtrack for that puzzle. So the gatefold photos are just two aerial images of the place I was born  (Heidelberg, Germany) and the place I live (Philadelphia, PA). The images are connected by this river lined up in the middle, so I was just trying to illustrate that analogy in a more literal way.”

Below, download a free song from the new album, “End Times.”