If the Philly music scene were a school, The Chairman Dances would be the library, an endless trove of information and stories; if it were a food court, they’d be an artisan bakery, selling handmade pastries crafted with care. The Philly art-pop foursome take a classical, craftsmen approach to songwriting—while other bands are getting stoned in the basement and jamming mindlessly, The Chairman Dances are fastidiously arranging string and horn parts, and working in allusions to their favorite literary works. It’s all in a day’s work for the band, whose members all boast music degrees, and whose new LP Michael and the Prophetess, out Friday, teems with lush strings, horns, and yes, allusions.

It’s an appropriate description, given that Rosen met vocalist/guitarist Eric Krewson while working at U Penn’s rare books department; the friends teamed up with drummer Mike Giuliana (a classmate of Krewson’s) in 2010, and The Chairman Dances were born. Guitarist Andrew Ciampa came on board earlier this year, rounding out the current line-up.

The band’s name is a nod to the 1985 outtake of John Adam’s opera Nixon in China, which Krewson (who adapted the moniker while still an undergrad), finds particularly inspiring. The rest of the band shares his fervor.  “Modern classical music has always had an influence on our songwriting,” says Ciampa.

As eldest statesman, Krewson is the band’s primary songwriter. A wiry, bookish type who graduated from Drexel’s music industry program, and Temple’s musicology program, he gushes about the influences of Mikhail Bulgakov (who Michael was named after), Vladimir Nabokov, and Gabriel García Márquez in his songwriting, and explains how Michael employs magical realism to access complex emotions.

“In some ways I think that [magical realism] can be more true than writing in a sort of Hemingway style,” he explains, noting how Michael fuses the magical and the mundane— “because I think when you make that leap, or use hyperbole in that way, it can resonate more emotionally.”

Michael tells the story of a young man growing up in 1956 Brooklyn, and peppers its narrative with supernatural elements. The record’s first single, “Prophetess” mentions angels and the sky “opening up”—details that Krewson says should be viewed metaphorically. “The Prophetess is actually a girl Michael had dated, who had gone away, and who he didn’t think he would see again,” he explains. “It’s sort of an awakening for Michael.”

Elsewhere, he includes specific references that place the story firmly in 1956 Brooklyn—a time and place Krewson says he was drawn to. One example is in wily guitar single “My Life and the Postseason Collapse of the 1956 Brooklyn Dodgers,” which details a particular game in the 1956 World Series.

“The year before the Brooklyn Dodgers had won the World Series, and then the following year it was the Dodgers and the Yankees,” explains Krewson, his face lighting up as he explains the epic borough vs. borough match-up. “And Brooklyn was up I think two games…and then Don Larsen threw a no-hitter in game 5, and the Yankees came back to win the series.” It’s a metaphor, of sorts, for Michael’s own downfall. 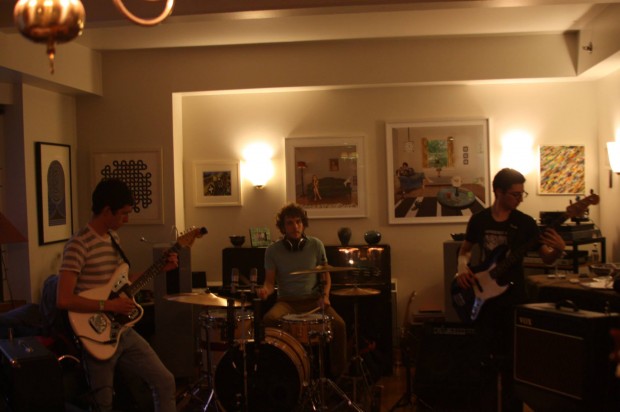 Of course, it’s possible to enjoy The Chairman Dances without knowing any of this—there are lush strings and horns to get swept up in, and recurring motifs that lend the record a breezy sense of completeness.

The arrangements are the forte of the rest of the band, who take Krewson’s song skeletons and flesh them out with complex arrangements. For Michael, this required finding a slew of other musicians to play on the record, most of whom were recorded separately via Rosen’s (who just graduated from the prestigious Peabody Institute Conservatory) large network of friends. “I roped a few of them in,” he says, noting that “the flutes were recorded in Baltimore” and “the violins were recorded in Chicago.” Other parts were tackled by local musicians—Krewson played the trumpet, and Dan from The Quelle Source contributed as well.

The large number of instruments allows for dense songs teeming with life—and more creativity in the arrangement process.

“There are little musical themes that pop up throughout different songs—melodies that might be in the violin part in one song, and the guitar part in another song,” says Rosen with an arranger’s knowing grin. “The very first song on the record for example, which is kind of like the prologue, functions musically as an overture. So I crammed a melody or theme from every other song  in the record into that song—into a little flute part, or trumpet part. It might not be obvious when you first listen, but the whole record is in that song.” He smiles again.

And while all band members are influenced by modern classical, musically, Michael covers a diverse palate, from the aforementioned wailing guitar lines in “My Life in the Postseason Collapse” to the shimmering, ‘70s sounds of “Prophetess” to the delicate, Belle & Sebastian-esque twinkle of “Well-Wisher.” Other tunes, such as “4700 Hazel,” employ raw, skulking guitar lines—a trait Ciampa says arises from his punk-rock roots (he also plays bass with punkers The Dolts.) “I definitely think that sort of lo-fi sound influences the way I play,” he adds. “I like crunchy, dissonant things.” It’s the fusion of the crunchy with the lush that makes Michael so effective.

The band will celebrate Michael and the Prophetess’s release this Friday, June 14 with a headlining show at Kung Fu Necktie, alongside The Quelle Source and Goodnight Lights. Then after that, it’s back to work! The band states they already have six new songs in the pipeline, and are working on a “special Joni Mitchell cover” as well.

“We don’t stop,” says Rosen, explaining that the foursome is constantly finding inspiration. “We’re sorta a sleep when we’re dead band.” Spoken like a true artisan.

The Chairman Dances play Kung Fu Necktie, 1250 N. Front St., this Friday, June 14. Tickets for the 21+ show are $10 and are available at the door. More info can be found via the venue’s website.