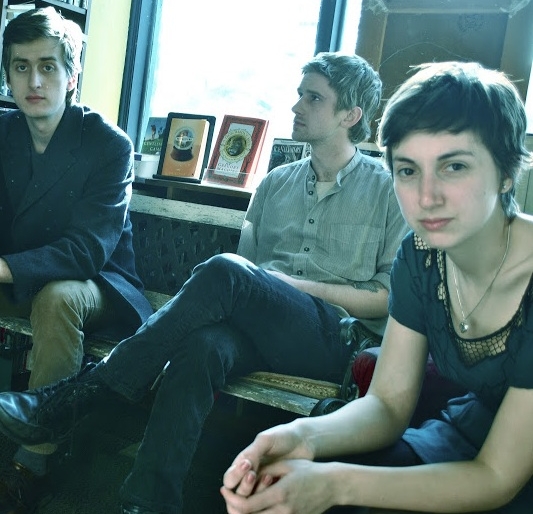 On their debut EP All My Charm and Grace, West Philly’s Liz and the Lost Boys had a quirky, folksy thing going on; since its release, the band’s sound evolved exponentially. A studied classical pianist and harp player, frontwoman Liz Ciavlino pushed her songwriting in more expansive directions, incorporating sultry jazz, pop and rock sounds into the mix with players Will Wright (bass), Dane Galloway (guitar), and Eric Huefner (drums). We got a taste of that broader sound and scope when Liz and the Lost Boys recorded a Key Studio Session last month, and even more so when the band released its self-titled debut album this week. The band celebrates the album’s release tonight at MilkBoy with Anjuli Josephine and Son Step on the bill. We caught up with Ciavolino to talk about musical growth, teaching versus performing, and skirting the pigeonholes that come with playing harp.

The Key: Compared to the your EP, there’s a very exploratory element to the full album. How did that develop?

Liz Ciavolino: Good question. I think that the album that I have right now is something that I’ve been working on for a long time, and it’s kind of almost, I always wanted to make something like this, but I wasn’t capable of it before. I came out of a classical music background. I always envisioned music that was a little bigger than that EP, just a little more varied and longer songs and stuff like that. That’s what I wanted to do, but since that EP I felt like I had to put a lot of time into a lot of different skills – not only my instruments and songwriting, but also learning how to collaborate with people, how to work with other musicians in a way that we all were making something that I was happy with and they were happy with. That’s been something I’ve definitely spent a lot of time working on and thinking about. It might sound silly, but that was a really hard thing for me to get my head around.

TK: You teach music too, right? Has that affected how you perform and collaborate?

LC: I’ve just been teaching for a year now. This is my one year anniversary this month, of being a piano teacher. That definitely has helped me to be a stronger musician on the whole, just to get to talk and think about music all the time, everyday is awesome. I couldn’t ask for a better job.

TK: And since you have to talk to your students about what they’re playing, does it make it easier for you to your band mates about what you’re collectively playing?

LC: I would say so. When it comes to being a musician, there are all these different skills that you have to have, and work on. It’s not just being able to play scales really fast or be awesome at your instrument. I definitely think being a teacher has made me a much more well-rounded musician, and collaborating with my band mates has made me a much more well-rounded musician. So it’s these different skills that all help each other in lots of different ways.

LC: It was great. I feel like a lot of people who have done more recording, know exactly what they want – this kind of mic, or this kind of effect – and I didn’t really have that yet. It’s something I would like more of, I just don’t really have an expertise in that, so I felt like we were in good hands with Jeff. He’s recorded Mary Lattimore before, too, so I liked working with him. It was like “you know what harps are like!” And he’d be like “it’s not that hard” and I’d say “I know, but you just know, you know how they work.”

TK: Have you always played harp? Or is that something that you came to later?

LC: That was actually my first, really serious instrument. I played the piano at my parent’s house for a long time, when I was five, six, seven, but I really started taking lessons consistently when I was nine, and I started taking harp. After I did harp for a few years, I went back to the piano. I took all the stuff I had learned from the harp, and applied it to this instrument that I had already been playing around with for a long time. So that’s actually my number one instrument, closely followed by piano.

TK: Was there a lot of harp on the EP?

LC: There was. It was actually probably more harp driven than the album.

TK: Maybe I was hearing harp, and thinking mandolin or something, because when I first found out about the EP, and saw photos, I didn’t see any photos of the harp, or didn’t see the harp in any photos. I guess I was thinking that was a different instrument.

LC: People think it’s a ukulele sometimes. I’m trying to get better about promoting the harp as part of the band, but whenever the harp comes out, people say something about Joanna Newsom, or angels, so sometimes I try and distance myself from it, even though I love playing it.

TK: It’s like you want to promote, or embrace the harp, but you also don’t want to be pigeonholed by the harp.

LC: Yeah. It’s just that people have all these things that they think a harp should be and it’s frustrating, or it’s just all they see, and hear, and they can’t think past the fact that it’s a harp.

TK: What’s it like traveling with a harp? Do you have any harp horror stories?

LC: Not yet. Traveling with the harp is definitely frustrating sometimes. I bought a car that my harp would fit in. Not many people have that thing that they have to do. I took my harp case with me and was lying out in the back of all these cars, trying to figure out which one it would fit in. The other day I was driving around with my harp and I was actually thinking about that. I was driving really carefully, thinking, I’m in my car with my harp, my two most valuable possessions and if anything happened, it would just be awful. But it hasn’t happened to me yet. It’s nice having band mates that can help me out. We’ve definitely lugged my harp up really narrow staircases, and weird places like that.

TK: How did you connect with your bandmates? And how do you feel they’ve helped push the music forward?

LC: Both of them are Craigslist people, which is really funny. I feel like I’m the luckiest Craigslist user ever. Matt Scarano did drums on the album, and he’s worked with Will a bunch of different places. So when Will and I found each other on Craigslist, we realized we also kind of knew each other in real life. That helped things go really smoothly. They’re both really cool and great musicians. I’m really excited to have them onboard. They’re both really positive, fun people to be around, they’ve both played in a lot of different things, and I like having that, since I feel like our sound isn’t straight up rock and roll, it’s not straight up jazz, or straight up folk. It’s nice to play with people who have had a little bit of everything, and both of them are definitely in that category.

TK: You have a classical background, but Liz and The Lost Boys is your primary band. Do you ever get to perform in any other groups where you get to dabble in more straight up classical or other stuff that you have more training in?

LC: Not right now. It’s something that I think would be cool, since I’ve most only played in my own band, which is fun, but I would like to learn from other people, and be part of their projects. This whole year, I feel like it’s been a year, I’ve been working on this album, and getting it all together. But maybe in the future I’ll have room to try other things.

Liz and the Lost Boys play MilkBoy tonight with Son Step and Anjuli Josephine. The 21+ show begins at 9 p.m., tickets and information can be found here.