Review: Baths performs at Union Transfer (and loves it) - WXPN 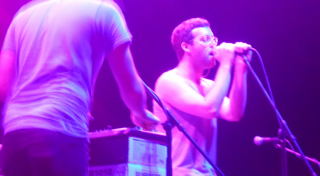 Review: Baths performs at Union Transfer (and loves it)

Will Wiesenfeld does not work in studios.

An electronic musician under the name of Baths, Wiesenfeld prefers to create in the privacy of his own house. But for the crowd at Union Transfer on Thursday night, Baths made an exception to come out of his bedroom and spellbind his audience with complex compositions and one of the purest falsettos out there.

An artist of the Anticon label, Wiesenfeld is on tour to promote his newest album, Obsidian. It is the follow-up to his debut record, Cerulean, a masterpiece collection of entrancing experimental pop that has often been grouped within the L.A. beat scene (a label with which Baths feels rather uncomfortable). Cerulean, released by Anticon in 2010, made Pitchfork’s “Album of the Year: Honorable Mention” list — a nomination which it certainly deserved.

But this time around, Baths has exposed a more enigmatic side. His tone has become deeper and darker, disregarding the breathlessness that defined Cerulean. He explores pain and confusion in his lyrics, introduces a fuller range of vocals, and includes some unexpected instrumentation. And it was this introspective mood — difficult, but just as valuable — that the twenty-four year old from California shared with the crowd at Union Transfer.

A fellow member of Anticon, producer Djavan Santos (a.k.a D33J) opened the show. Alone on stage, he hunched over his computer – with bobbing head and heavy black boots – to drop some rich and layered mixes. He does bedroom techno right: ambient sound that can evolve into an R&B vibe (and at times, even a more hip-hop feel). And to top it off, he plays the guitar as his jams loop into abstraction.

A duo from Chicago, Houses followed. Signed to Downtown Records, which includes artists like Cold War Kids and Miike Snow, Houses is usually known for slower harmonies and subtle beats. For the performance, singers Dexter Tortoriello and Megan Messina were backed up by drums and a guitar – which gave a harder edge to their refined production. And the voices of Tortoriello and Messina, especially in conjunction with each other, were pretty special.

After a brief pause – during which Wiesenfeld himself put up tube lightening across the back of the stage – Baths’ set began, accompanied by Morgan Greenwood from the group of Azeda Booth.

He began with “Worsening,” the first track from Obsidian. It was the perfect showcase for Baths’ new approach: the song drives forward as Baths introduces his falsetto. But towards the end, he takes a step back to play the piano and include some string instrumentation, which briefly interrupts the heavy background beat.

It has its moments of an earlier Wiesenfeld – softer, more lyrical – but on the whole, it’s a powerful, gripping track that indicates a new method and a new mood.

The performance would match this opening, varying between delicate jams and a grittier pulse (and light-hearted jokes from Baths who admitted that he was pretty nervous).

To enthusiastic cheers of recognition from fans, Baths played “Lovely Bloodflow” from Cerulean. It’s a sharp and light pop track, which still manages to include a deeper beat in the midst of some classical piano. And of course, Wiesenfeld has his falsetto to take the song to an otherworldly level.

Baths continued the keyboard work in “Ironworks,” a slow groove from Obsidian. But this track drops all pretense of a sentimental attitude. Wiesenfeld reveals a more intimate and definitely more complicated side: the track is deliberate and less cluttered than other songs, but the lyrics give it a whole other heaviness.

He moved from this to “Incompatible,” a track which shows that Baths is not afraid to cut between sounds, to introduce abrasive noise. And it set up the following songs well, inclusive of “Earth Death” – which is probably the most explosive (and almost heavy metal like) song from Obsidian.

And that’s when Baths started to really play around, tapping into the synthesizer to create an extended version. It was tribal and rough, and it made the crowd move in shared fervor.

Baths finished the set with a return to Cerulean to the vibrant and airy tracks that put him on the radar.  And he performed his encore (“No Eyes” from Obsidian) with gratitude and just the right amount of energy – including a small dance in which he ripped off his thin glasses.

“This felt like the best show of the tour,” Wiesenfeld said.

Philadelphia did not disappoint him. And it was clear, as one fan jumped on stage, that Baths has earned his place as a favorite in the electronic scene.