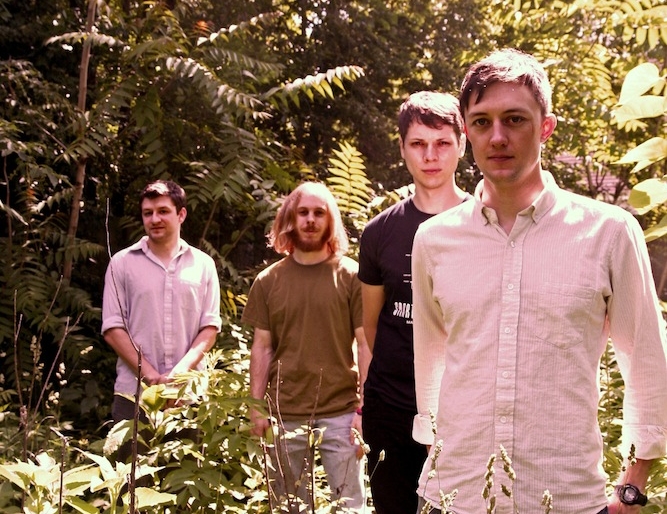 Boris Yeltsin was the first freely-elected president of Russia, who served beginning 1991. After nine years of reshaping the post-Communist country, Yeltsin resigned during his second term and lived a quiet life after that, passing away at age 76 in Moscow six years ago. The powerful man will always be remembered in Russia as a strong patron in taking apart the Soviet Union, and pushing the social reform that made present-day Russia.

But how does this political icon connect to a quirky, eccentric, indie-pop band from Springfield, Missouri? Phillip Dickey, drummer, and Will Knauer, lead guitarist, of Someone Still Loves You Boris Yeltsin answer on a cell speakerphone while taking a small break from traveling to their next tour stop. “His name was on the radio a lot at [the time we formed the band], since he was resigning from office,” Dickey says. “We knew it had a catchy and pleasing ring to say ‘Boris Yeltsin.’” He admits that they did not want anything too serious, and if they knew it was going to stick, they probably would have put more thought into it. But the group passively continues to give tribute to the late politician as they travel from city to city, country to country, bringing their live show to their fans (along with “cookies and crème,” according to Dickey).

Instantly connecting at a Superbowl party during their senior year of high school, Dickey and Knauer were the founding members SSLYBY. Knauer remembers having an essay that year prompted by the question, “Where will you see yourself in 10 years?” “I had just gotten a guitar and started playing in a band and knew I loved it. I didn’t want to have to work in a scary factory or something,” he admits in a low, calm, paced voice.

Dickey, being a slight sports star in his adolescent life, mentions that he thought he was going to be a professional athlete. I tell him I’m glad he didn’t take that route in life, or maybe I wouldn’t have liked him so much. “Maybe you would have liked me more,” Phil jokes, speculating that he would have been a wrestler, toned with 6-pack abs…a feat he continues to work on with his out-of-shape dog, Loretta.

Losing bassist Tom Hembree just before their first album release of Broom, Phil and Will have been successfully playing their addictive, melodic, and experimental pop sound with multiinstrumentalists John Robert Cardwell and Jonathan H. James for the past three albums. The group even took a recent trip to Russia which they documented in their video trailer, Discussions With Russians. Asking the biggest obstacle they had to get over in other countries, Knauer says “Not getting lost by yourself.  You don’t have the convenience of cell phones so you’re on your own, just like in the 90’s.” Luckily for them, they didn’t get too lost finding their way back to Missouri, where the band jumped straight into recording their new album, Fly By Wire, coming September 17th this year. Now that Cardwell has taken a break, Hembree tagged back into the band, playing as if he never left.

Fly By Wire channels the experiences the group had on their Russian excursion, as well as brought them back to why they started the band in the first place. Dickey mentions that they went back to the attic where they recorded their first album, which can be seen in their preview video released earlier this month (watch it above).

“It was about making the album you always wanted to make,” he says. “We kinda hung out in the attic becoming teens again.” Admitting that their inspiration starts off with something tangible, such a poem or a place, and then transforms into creating demos and trying to mimic great musical transgressions in their own abstract style, Knauer says “I wouldn’t say there’s been a change in our sound, I think we have just learned how to refine the feel of each song to be able to shape it the way we want, sonically and emotively.”

Starting in their hometown and playing at MilkBoy Philly tonight, SSLYBY has been touring with Ha Ha Tonka and Ezra Furman & the Harpoons through the month testing out some of their new material, including their new single, “Nightwater Girlfriend.” I asked Will if everything turned out differently from what he thought it would when writing his high school essay. “It’s both different and the same for the most part,” he mentioned. “When I was 15 and playing in my attic, I would close my eyes and pretend like I was on stage in front of a lot of people.  Now when I’m on stage, sometimes I close my eyes and pretend like I’m back in the attic.”