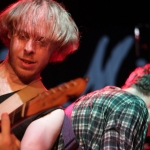 “We’ve been calling this the thunderstorm tour.” Someone Still Loves You Boris Yeltsin’s Phil Dickey slightly chuckles while thanking the audience for coming out in a downpour. He goes on to explain that every venue on this tour, so far, has had terrible weather, and every night he gets extremely nervous that all three bands will die in a van. But a little bit of rain and thunder has not deterred the trio-band group from playing a show yet.

Braving the elements together, SSLYBY, Ha Ha Tonka, and Ezra Furman have been touring this month to preview their newest albums, all coming out this Fall. Thursday night, they played at the chic, intimate MilkBoy Philly, leaving 2 more shows in the tour at Boston and New York.

Raising the stakes high, Ezra Furman opened the high energy show. With only a singer/guitarist and a drummer on a dimly lit stage, each song was surprisingly packed with a punch and immersed with eccentricity while Furman stood up on the edge of speakers and kick-jumped across the stage. Wearing a Wendy’s button-down uniform shirt, a pair of bright yellow SSLYBY sunglasses, and a harmonica stand around his neck, Furman ripped through his dance-ready rock melodies, including a cover of Johnny Cash’s “Folsom Prison Blues.” “My next song is going to be a love song,” Furman announced after kicking off his shoes. The crowd got quiet and sentimental for a second as he took a breath and a sip of his beer. “It’s called ‘Blood Sucking Whore.’” The whole room seemed to snicker as he rolled right into the blunt ballad. My friend leaned over to Furman after his set finished. “Why the Wendy’s shirt, man?”

“I worked there,” Furman replied, “and was like ‘Okay, but you’re not getting this back.’”

Ha Ha Tonka soon took over the stage, keeping the energy high and the mood light. With a foot-stomping, folk-rock sound sprinkled with organic harmonies, the four piece band kept the audience involved, calling out for the room to make some noise or clap their hands along. Even as a lazy mic stand decided to fold itself in half during 2 songs, the group never allowed a still moment to creep in as they jumped, stomped, kicked, and swayed around the stage. Passively supporting his fellow band by wearing a Tape Club shirt, lead singer Brian Roberts reminisced halfway through the set that both Ha Ha Tonka and SSLYBY started around the same time in Missouri, and have been playing with each other for years. Following with their four-part harmony a cappella piece “Hangman,” Ha Ha Tonka carried through the rest of their set kicking up the pace, getting the crowd to dance along.

Extremely animated and confident, SSLYBY swarmed the stage and the crowd pushed in close. Right off the top, Dicky tests his luck at hanging on the light cage above the drum set. Not trying to literally bring down the house, he kept his support on the drum stool to start the energized performance. Feeding off the band’s liveliness, the room pulsed more with each song, including their new single “Nightwater Girlfriend” from their upcoming album Fly By Wire. “Where have you all been the past 8 years?” Dicky was flattered by the audience’s reaction. As the show took an slight improvisational turn while playing some throwback favorites, “Saddle Up,” “Let It Sway,” “Glue Girls” and “Dead Right,” the band began to invite different friends to the stage, including their merchandise seller described as “the 5th Boris Yeltsin,” to help with cow bell, vocals, and the tambourine.

Will Knauer, preciously returning the favor by modeling a Ha Ha Tonka shirt, came to the edge of the stage during a guitar solo, and the crowd went wild trying to brush his hand or touch his guitar. During another song, Dickey and Knauer push back to back so hard that they toppled over each other, leaving Knauer to finish the song on the floor. SSLYBY didn’t even have a chance to leave the stage before the audience chanted for more.

Honoring the request with “Think I Wanna Die,” SSLYBY invited the other 2 bands and then some on stage for “Modern Mystery.” The spontaneous finale caused blissful chaos throughout the venue. Knauer on top of Long’s shoulders. Dickey sharing a mic with Anderson. Furman intermingled with everyone on the small stage. The room broke into a modest mosh pit. A few shirts were already off from the almost unbearable, the sweat-drenching heat. Satisfied grins could be seen on every band’s face as they looked over the helter skelter sing-along.