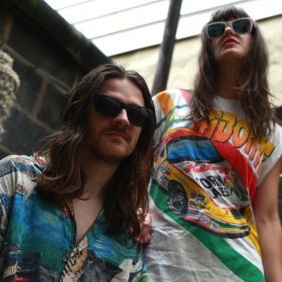 Philly garage-blues act Lantern is about to take a huge leap forward. After a hearty discography of self-releases, limited-run cassette singles and EPs – mostly gritty and defiantly lo-fi in nature – the band is about to release its debut full-length, Rock ‘N’ Roll Rorschach, on Sophomore Lounge records. While maintaining the volume and grit of the rock and roll underbelly it explores, the album steps aggressively into hi-fi production and arrangements – which includes a tasty baritone sax on the song “Evil Eye.” All week we’re exploring the album on Unlocked, The Key’s regular series on new and significant releases from Philadelphia artists. Later in the week we’ll an album review, a live chronology and an interview with bandmates Emily Robb and Zachary Deveraux Fairbrother. Today, it’s a download of the track we were just talking about, “Evil Eye.” Below, you can download it all week courtesy of the band, and make sure crank your speakers – Robb rules hard on the lead vocals. Check back every day this week for more on Rock ‘N’ Roll Rorschach.