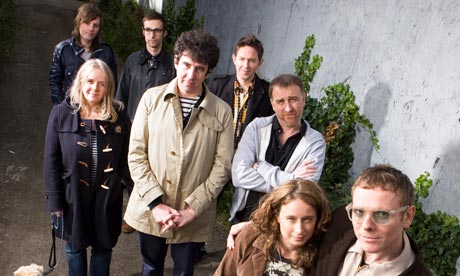 Any news from Belle and Sebastian is a great way to start the day. The Scottish indie-pop septet, which makes its first Philadelphia appearance since 2006 at The Mann Center for the Performing Arts next week, just announced the release of a new compilation album to go with the tour. The Third Eye Centre, out August 27th on Matador Records, will gather the band’s b-sides and rarities from the past ten years; think of it as an aughties companion to the great Push Barman to Open Old Wounds comp. This is sweet news, since the band is well known for having deep cuts that are equally good as (and often better than) its featured album tracks. Among the mix is a new remix of “Your Cover’s Blown,” a groovy disco-funk cut from the band’s 2004 Books EP, redone by Glasgow dance-rock dude Miaoux Miaoux. Listen to it below, check out the tracklist after the jump, and get tickets and information on the July 10th show at the Mann Center’s website.

Track listing:
I’m A Cuckoo (Avalanches Remix)
Suicide Girl
Love On The March
Last Trip
Your Secrets
Your Cover’s Blown (Miaoux Miaoux Remix)
I Took A Long Hard Look
Heaven In The Afternoon
Long Black Scarf
The Eighth Station Of The Cross Kebab House
I Didn’t See It Coming (Richard X Mix)
(I Believe In) Travellin’ Light
Stop, Look And Listen
Passion Fruit
Desperation Made A Fool Of Me
Blue Eyes Of A Millionaire
Mr Richard
Meat And Potatoes
The Life Pursuit