In Review: Warped Tour at the Susquehanna Bank Center - WXPN

In Review: Warped Tour at the Susquehanna Bank Center
Artists

In Review: Warped Tour at the Susquehanna Bank Center

Last Friday, the Vans Warped Tour punk rock music festival invaded the Camden Waterfront. Currently in its eighteenth year, the tour has branched out from their strictly punk lineup to include metal, hardcore, pop, electric and other genres; even with these changes Warped Tour continues the most noted punk music festival in the country. 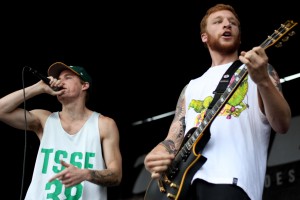 The Story So Far | Photo By: Rachel Del Sordo

Birthed from the South Philadelphia basement scene, The Wonder Years have developed into one of the biggest names in the current pop punk scene. Their main stage performance at this year’s Warped Tour was nothing short of a full circle moment for the band. Lead singer Dan “Soupy” Campbell was almost tearful as he proclaimed this hometown show as one of the best days of his life. The bands enthusiasm for playing the Warped Tour main stage translated into one of the best, most high energy performances sets of the day. Fans filled the the arena singing each song at the top of their lungs while people who were not familiar with the band had no choice but to be taken by their infectious sound. (If you’re a fan of The Wonder Years you should probably check out The Story So Far, a pop punk band form Walnut Creek, California who put on a great performance at this years Warped Tour. Their music is loud, powerful and unforgiving. Their energetic performance made their Warped Tour debut very promising.) 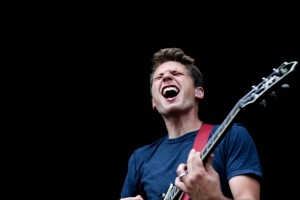 Also playing a hometown show was Hammonton, New Jersey’s The Early November. The Early November became popular in the early 2000’s with their emo-influenced sound, and recently broke a four-year hiatus in 2012 with its most recent album In Currents. The new album as well as their live performance shows the bands ability to grow and mature as musicians. Their set was polished and mature as they played tracks old and new. 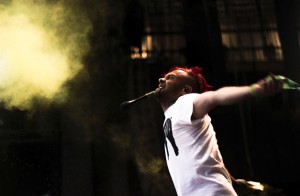 Without fail, each year I go to Warped Tour, they unearth at least one band from my middle school CD collection. I thought this trend might start to disappear but it seems to be doing just the opposite. The Used garnered the majority of their success between 2002 and 2007 with their self-titled debut and follow ups In Love and Death and Lies for the Lairs. They hit Warped Tour in support of their latest album The Ocean in the Sky and were hellbent to make sure their performance would not be forgotten. The band marched on stage ski masks and about 15 or so fans also wearing ski masks. They continue into an insane performance which included throwing colored pigments into the crowd. The Used did not let the short set times restrict them, they put on an all-out show. This made their performance the most memorable of the day. (On the topics of throwbacks, Hawthorne Heights also attended this years Warped Tour, where they proved they could be moody and disinterested in any decade.) 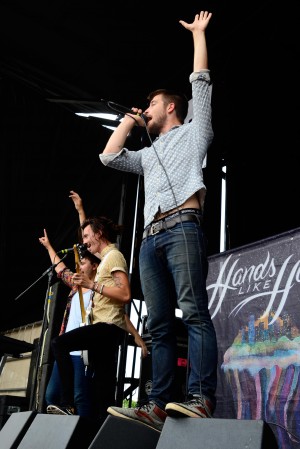 Handsome and signed without recording much music on their own, it might seem that Australia’s Hands Like Houses are Rise Records’ attempt at a post-hardcore One Direction. In that respect they might just be, but Hands Like Houses have a unique style that could carry them far. Mixing post hardcore instrumentals with soulful, Jonny Craig-esque vocals they create a sound that can stand out in this cookie-cutter genre. Everybody needs a Rise Records guilty pleasure; mine has been Hands Like Houses for a while. Maybe they could be yours?

Rap/rock band 3oh!3 have had a handful of mainstream hit since their debut in 2007. They put on by far the most danceable performance of Warped Tour, getting audience members singing and moving along to each song. I even saw a few parents and security guards nodding along with the music. It was infectiously entertaining.

By the sound of the piercing screams coming form an audience full of teenage girls you might have thought Justin Bieber was about to hop on stage. Wrong, it was none other than screamo band Sleeping With Sirens. Their ability to fuse hardcore and bubble gum pop catapulted their recently released third album to No. 3 on the Billboard Hot 200 and win they an adoring following of teenage fans. Even though some of their newer tracks bordered on annoying, the boys know how to put on an a good show. They also get props for starting an huge mudslide down the lawn section of the Susquehanna Bank Center during their set: well done. 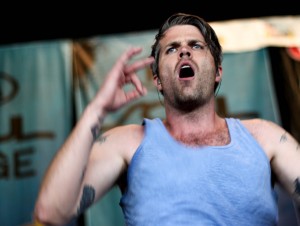 Another band with a huge teenage girl following was indie pop band Never Shout Never. They second to last on main stage and were exactly the buzz-kill no one was looking for. Although some of their songs are catchy the band barely moved around on the stage and fell flat in showmanship. However, William Beckett from The Academy Is joined the band on stage for a song, and that was pretty cool.

No matter weather you like the music featured on Warped Tour or not, it will continue to be important to alternative music. It’s is a place for like-minded music fans to come together, enjoy their favorite bands and discover new music. Unlike some music festivals that have become more about partying than discovering music, Warped Tour’s main focus is artists and fans coming together for a great day of music, love it or hate it.