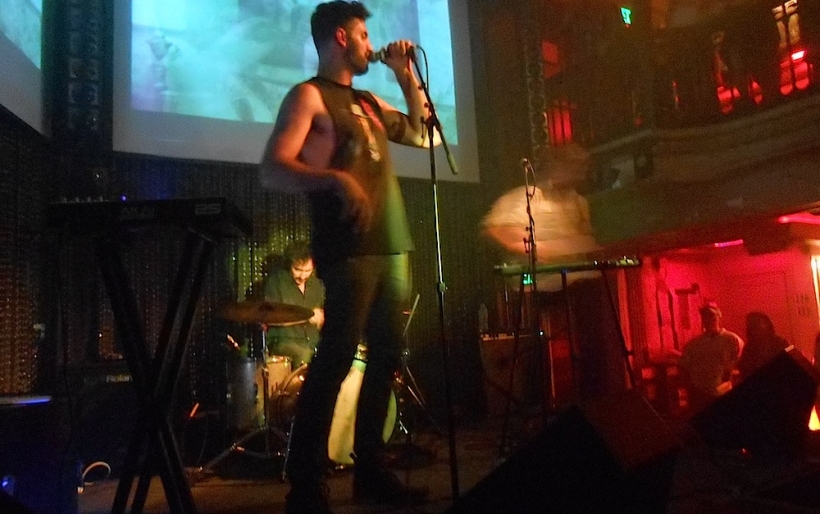 It might take a few listens to become accustomed to Daughn Gibson’s style, let alone appreciate it. But that’s probably fine by the Carlisle singer-songwriter, because he intends to reinvent genre from the ground up – and after a promising debut last year, we realize this XPN Artist to Watch is well on his way.

The Pennsylvania born musician, who recently joined the Sub Pop Records roster, is on tour to promote his July record, Me Moan (and it’s worth nothing that for the first few stops, he played alongside local hero, Kurt Vile). Gibson is recognized for his heavy and rich baritone, which is often compared to that of Johnny Cash, and his penchant for storytelling.

But the singer is known as well for his attempts to blend two unlikely styles: country and electronica.

The union between genres is unexpected, but Gibson is refining his craft and for the crowd at Johnny Brenda’s Friday night, his music worked – and worked really well.

Man On, the moniker of Joel Winter, opened the show at the popular local venue. A member of Pearls and Brass, a stoner metal band from Nazareth, Winter is also pursuing his solo project, which is based exclusively in lap steel work.

Winter began his set without introduction, walking simply on stage and sitting down in the dim light to start his eerie and unusual creations. His pitch slides and wails slowly, creating tones that are at once hollow and full, both a cry and a whisper. Although his music can at times be rough, it has a certain depth and versatility to it — sinking and soaring in turn. Winter might be in the early stages of experimentation, but he shows promise and he seems to be slowly finding his perspective.

Hiss Golden Messenger, an American folk duo composed of singer-songwriter M.C. Taylor and back up guitarist Scott Hirsch, followed. The North Carolina group is often praised for its mix of folk rock, country and rhymes and blues – a blend which the two members offer without decoration.

Alone on stage with an acoustic guitar in tow, Taylor started his set with an a capella version of “Blue Country Mystic.” His voice seems to come from an old record, tender and slightly reedy. This simple set up stripped the group’s tougher, more alternative vibe to a slow and easy pace – one which was clearly centered in the Taylor’s country roots (he would perform solo for the majority of the set). Taylor spoke often of his new baby, appropriately choosing “I’ve Got a Name for the Newborn Child” for one of his final tunes. It’s a simple and upbeat song that showcases HGM’s strength for old timey lyricism. Focusing mostly on vocals and verse, the performance was clear and thoughtful – and much appreciated by the audience.

Dressed in a tattered Garth Brooks t-shirt, Daughn Gibson took to the stage for the final set of the night. Accompanied by drums and a guitar, as well as two screens with scattered visuals, Gibson started with “The Sound of Law,” a country-based song that drives forward with Gibson’s heavy, drawling baritone but leans towards rock with sharp, double time drum rolls and sinister guitar riffs. It’s a forceful track and one that’s definitely given a harder edge live.

“Philly, you motherfuckers,” Gibson growled into the microphone.

His second tune, “You Don’t Fade,” is probably one of the best examples of Gibson’s craft: countrified vocals and trippy sampling. The track begins with high-pitched vocals, looped to create a sort of warped chillwave effect, and the heavy supplied backbeat continues into Gibson’s verse, whose rich and rooted tones perfectly offset the echoing sample.

On the whole, “You Don’t Fade” is that multi-toned, multi-genred groove for which Gibson is shooting. It isn’t as urgent or as necessarily foreboding as the former tune, but “You Don’t Fade” is catchy and psychedelically shaded and demands attention.

The singer then returned to works from his debut album, All Hell, which included “In the Beginning” and “Dandelions.” The former is light and upbeat, featuring a single phrase female chorus and keyboard work, but for the latter, Gibson tapped into his synthesizer to introduce (and tensely build) a wailing and stunted siren. Cue the drums for a tense marching beat and the track would not have been out of place for a old western showdown at high noon.

“Play that again!” said a member of the audience.

For “All Hell,” the final track off his first release, Gibson experimented with the synthesizer, looping samples to create a doomy psychedelic rock alongside a raging, pounding guitar. But for his encore, Gibson brought it back to slower country, layered by hazy electronic echoes and pitched down vocals, with “Tiffany Lou.”

“Philly, I fucking love you,” Gibson said, before walking off stage.

Setlist:
The Sound of Law
You Don’t Fade
Won’t You Climb
Lite Me Up
In the Beginning
Dandelions
Kissin’ on the Blacktop
All Hell

Encore:
Tiffany Lou
A Young Girl’s World
Looking Back on ‘99