The Made in America Festival hits the Ben Franklin Parkway this weekend, and the lineup is stacked with a huge assortment of electronic musicians. Deadmau5, the eccentric Empire of the Sun, and many more awesome and lesser-known artists will be turning the parkway into a dance party that weekend. These artists and DJs represent many different styles within the EDM scene, both musically and performance-wise. Get educated on some of the must-see acts below.

Although he’s reached international mainstream success in the past few years, Scottish DJ, vocalist, and producer Calvin Harris has been making electronic music for over a decade. He began creating nudisco and electropop, often singing in his songs. Harris’s style is now more electro house-based, and he now works with many big-name singers. His sound is lush, grandiose and well-crafted, his songs are often vocal heavy (Kelis, Rihanna, Ellie Goulding, and Florence Welch to name a few), and his live shows promise to be stellar (especially because Harris beat out Tiesto to become 2013’s highest paid EDM artist). Harris’s 2012 album 18 Months has brought electronic music to the airwaves, and is the only record in history to have nine top-ten singles in UK history. Check out one of those singles, “I Need Your Love.”

Chapel Hill’s Porter Robinson is definitely in the league of young EDM stars. He’s barely 21, but has been quickly rising in popularity for the past two years, partially due to the fact that he was signed by Skrillex and partially due to his great, energetic live shows. To describe his own music, Robinson himself coined the term “complextro” – complex and electro, featuring a lot of intricate, interwoven basslines, synths, and a signature glitchy sound. It’s come to describe other electronic artists like Knife Party and Wolfgang Gartner. His EP Spitfire (the first release on Skrillex’s OWLSA record label) dropped back in 2011, but Robinson has been releasing singles since then. His most recent track is a collaboration with Mat Zo called “Easy.” 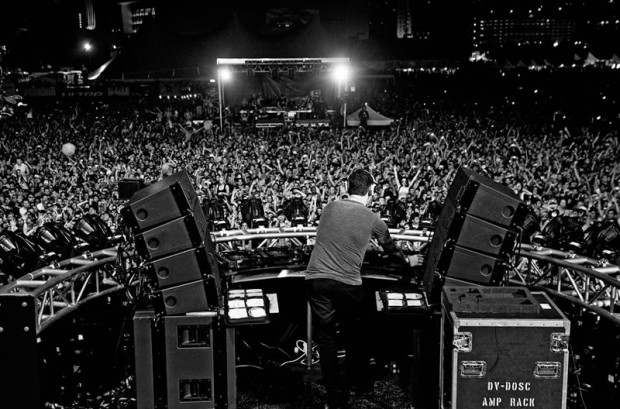 Another heavyweight in the EDM scene, Wolfgang Gartner produces and creates a blend of electro-house, progressive house, and tech house – a darker, bass-heavy, rugged, but very amped-up sound. He’s been making music for much longer than some of the current mainstream EDM stars, and he’s collaborated with loads of other huge artists in the scene, including Skrillex, Tiesto and Deadmau5 (who is also playing Made in America). Gartner gained fame in the electronic music world a few years ago for remixing a symphony by another, more well-known Wolfgang. His newest work includes 2 tracks dropped this year: the classic sounding, tech house-influenced “Anaconda” and the catchy “Overdose.” Stylistically they’re pretty different, but both very awesome.

Rudimental are an electronic foursome from London that create a lot of drum and bass music – a type of EDM largely underrepresented in the American scene. Fairly new to the scene, the group released their debut record, Home, this April which has got them a lot of attention in the UK. With nice, varied vocals, pumping synths and solid drops, the album has a lot of standout tracks (accompanied by some pretty awesome music videos).

Feed Me is English DJ and producer Jon Gooch. He makes music under many names (Feed Me, Spor, Seventh Stitch) and dabbles in many EDM styles, including electro house, dubstep, and drum and bass. In January, Feed Me released the Death By Robot EP, which features his signature deep bassline and glitchy sound. Good stuff – listen to Gravel below. Gooch’s live sets are known for their energy and diversity in electronic styles. This fall, Feed Me is planning to take a short hiatus from touring to work on starting his own label, so this is a great time to check him out.

Singer and EDM artist Robert DeLong was a drummer before switching his focus to electronica, and so he brings with him a medley of styles – indie rock influences, pop, electro house, and a one-man-band style. DeLong sings, DJs, but also performs with a variety of keyboards, drum pads, and video game controllers, using looping techniques and giving his amped-up tunes a quirky twist. He released his debut LP Long Movement this year, and earlier this month debuted the music video for his track “Happy.”