For nearly 20 years now, Boot & Saddle—the abandoned country-western bar on Broad Street at Ellsworth—has remained vacant, its iconic boot sign the sole reminder of a once vibrant past. This Monday, however, all that will change. The venue will reopen, thanks to nightlife guru Avram Hornik (Four Corners Management), who together with FCM’s Mark Fichera, R5 Productions’ Sean Agnew, and The Bowery Presents, will transform the shuttered eyesore into a thriving concert venue, complete with a 60-seat bar and 150-person capacity performance space.

New places to catch shows are always exciting—yet in the case of B&S, what’s even more exciting is continuing the space’s long musical history, which will pick up after a 17-year hiatus. In celebration of Boot & Saddle’s new chapter, we hunted down patrons and employees of the old Boot—to talk line-dancing, brews, and their favorite memories from back in the day.

“My memories of The Boot (as many people called it) are a bit fuzzy,” says Robert Drake, WXPN DJ and longtime supporter of the local scene. “I would make it a stop every New Year’s Day as part of my stroll up Broad Street during the Mummers Parade—it was PACKED but friendly, with lots of regulars.”

“My first time there was 1980—and I would go every New Year’s Day until the bar closed up,” he continues. “I remember the only draft beer they had was ‘Miller Draft—in bottles’ … which is exactly what the bartender would say to anyone who dared ask.”

The bar was owned by Pete DelBorrello, a Navy man and well-respected South Phladelphian, who also owned several other businesses on the block, including a check cashing spot and a Laundromat. “Pete and his family were really good people—respected by the neighborhood,” says Drake. “I remember there being TONS of Navy memorabilia throughout the bar—which led to the bar being a spot for sailors who docked in the Philadelphia Navy Yard.” 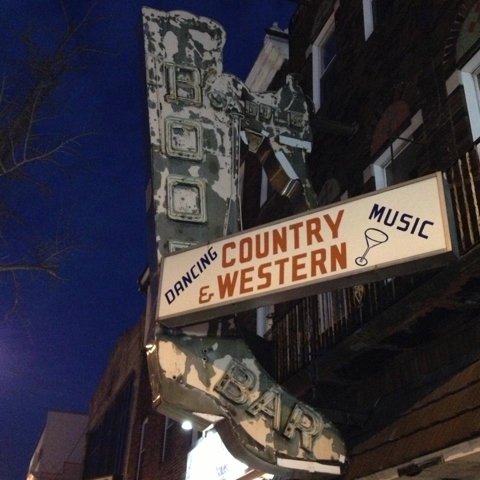 Military personnel were regularly on hand at The Boot, yet there was also a contingent of locals, who came for the cheap drinks and vibes. Frank Blank Moriarty, of famed punk band Informed Sources, remembers a younger group gracing the Boot as well:

“What would strike you was the diversity of the crowd,” he says. “One segment of the younger element was people into bands like The Blasters, Jason and the Scorchers, X, Lone Justice, and other roots- and country influenced music being produced at the time. The other segment consisted of homesick young members of the military. Surprisingly, I don’t ever recall there being a fight—I remember more of a ‘live and let live’ vibe,” he says.

The space itself consisted of two rooms: a front room and bar area with a 40-foot circular bar (constructed by DelBorrello’s brother, Al), and a back room with a sawdust floor and tables that saw live music and dancing.  The walls of the bar were lined with sailor caps from “virtually every U.S. ship that sailed into Philadelphia during the last two decades,” along with navy flags, medals, commendations, and “John Wayne kitsch”, while the back room contained old farm equipment. “It was quite a weird scene for sure,” adds Moriarty.

“Surprisingly, I don’t ever recall there being a fight—I remember more of a ‘live and let live’ vibe.” —Frank Blank Moriarty, Informed Sources

Sophy DiPinto, co-owner of DiPinto Guitars, and member of several Philly punk bands, including O Mighty Isis, agrees with his description. “What was my impression of the place?” she says. “In a word, surreal. It kinda felt like you were walking into a Scooby Doo episode—it was meant to look fun, but it wound up seeming spooky and weird,” she says. “When you walked in it was like any neighborhood dive-bar, but walk into the back room and it was a whole different world. It looked like someone took the contents of an old farm house and hung it from the ceiling. There were broken fiddles and old wooden chairs, logs and, of course an old wagon wheel hanging from chains and nailed to the walls,” she continues. “It was a rusty, splintery law-suit waiting to happen.” 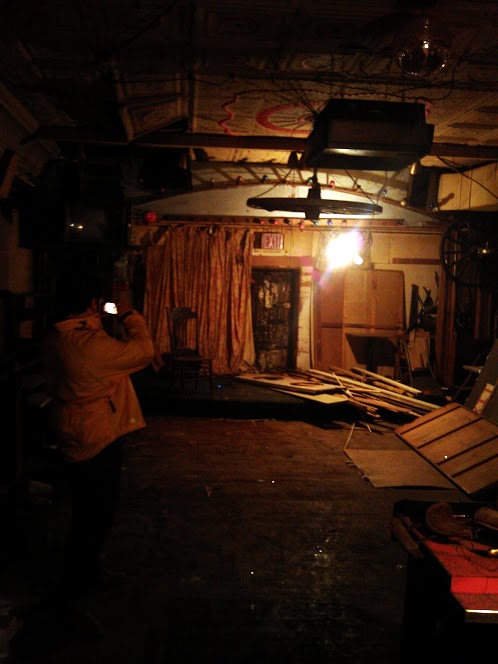 Still, that’s not to say the Boot was any MORE bizarre than other businesses in the area. This was South Philly in the 1980s after all, and—as Dan DeLuca, music critic for the Philly Inquirer— puts it: “That whole strip of the Boot & Saddle, and the Dolphin, and also Philip’s, this strange Italian restaurant down the block that was full of statues, knick knacks, and, as I remember it, a Great Dane that used to hang out in the dining room—had that kind of old, seedy, gritty, grimy South Philly feel.”

“What was my impression of the place? In a word, surreal.” —Sophy DiPinto, DiPinto Guitars

Still, weird as it was, The Boot was one of the few spots in the city where one could catch live country music—and people flocked there, seeking cheap drinks and great tunes.

The bands themselves were mostly local, and memorable more for their vibes than their names. “It’s funny, I remember being in the Boot & Saddle a handful of times but I can’t remember any specific bands I saw there,” says DeLuca. Drake concurs. “I can’t remember any names since the few times I saw live music there, they weren’t ‘name’ bands … just a bunch of guys getting together to perform country songs,” he says.

Moriarty and DiPinto hold fond memories of the house band, a bunch of “old guys” dressed “all in black” who played classic covers. “They were pretty good and if there was nothing else going on that weekend we’d go see them,” says DiPinto. “They had a ‘light show’ with all different colored lights on a board, with a big box controlling all the lights, and when bands played there was a woman who would work the box and run the light show.”

A typical set—according to Moriarty—would include songs by Johnny Paycheck, Waylon Jennings, and David Allan Coe—“heavy on the outlaw country.” “If I’m recalling correctly (remember: cheap drinks),” he continues—“the band would always close the evening with ‘Rocky Top,’ a song made popular by Lynn Anderson, about a city dweller longing for country life.”

During the week, the front bar occasionally hosted go-go dancers, and during the weekends, there were line-dancing lessons in the back. “I guess I first went there in about 1992—that’s when my friends and I encountered a group of seniors in line dancing class,” says DiPinto. “It was so mesmerizing that we went and joined the class just so we could hang out in the room.”

“I can’t remember any [band] names since the few times I saw live music there, they weren’t ‘name’ bands … just a bunch of guys getting together to perform country songs.” —Robert Drake, WXPN

By the mid 90s, the Boot & Saddle was losing steam, as a result of the Navy Yard drying up, and the neighborhood transitioning. A 1995 article from the Philly Inquirer quotes Del Borrello, who attributes the bar’s falling profits to the city’s ripping up and re-branding of South Broad. “”My receipts fell from $450 a day to $100, $150 a day,” he laments.

During this period, the Boot turned towards more punk-oriented shows. Wendy Gadzuk, a bartender during the mid-90s, remembers the change distinctly.

“Back in 1994, while I was playing in the band Dr. Bob’s Nightmare, our friend Blaze, who was the stepson of the owner … called up Todd, our guitar player, and said they wanted to try something different, to bring in a new crowd,” she remembers. “[He] asked Todd if he wanted to start booking punk/rock shows there. And so it began. He booked bands there on weekends…we played there a bunch, [along with] Thorazine, Limecell, the Stuntmen, and so many others that I can’t remember. Rockabilly shows. Punk shows. Sunday afternoon all-ages shows, while the bar was closed.”

The shows were relatively successful, and after a few shows, Gadzuk continues, “it was decided that the club needed a stage.” And so Dave (the band’s drummer), Todd, and Rodney Anonymous (from the Dead Milkmen) built a small stage—“just enough to give the band some separation from the crowd,” says Gadzuk. “I’m pretty sure it was Limecell (who are BIG guys),” she continues—“who were the first (and only) band to grace that stage, and the stage didn’t make it through their set. It collapsed about halfway through! Alas, the show went on.” 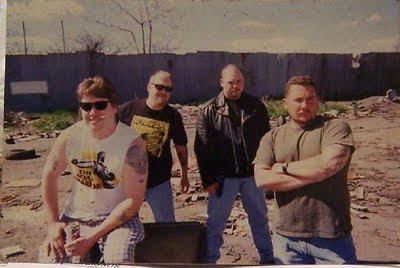 Other bands that graced the Boot back room include The Tequila Worms, Rancid Vat, Rupert Speed, and Mel’s Rockpile (not the SCTV sketch, but an early band featuring Matt Pond.)

Lisa Flynn, who played in the band Savage 3D, remembers hyped crowds and good vibes. “I loved the Boot & Saddle,” she writes via Facebook—“…It was such a great time in the city for rock ‘n roll bands. My band Savage 3D played there many times. It was a great rock room—Rancid Vat tore the roof off the place! I did however get slightly electrocuted one time when my lips hit the mic and my hand hit the guitar—ouch!!”

Such antics were not uncommon during the last few years of the now faltering-bar, although patrons insist they added to the fun. “I have this vague memory of someone from Mel’s Rockpile swinging on one of the wagon wheels hanging from the ceiling,” says DiPinto. “I can’t believe no one got hurt!”

“I loved the Boot & Saddle. It was such a great time in the city for rock ‘n roll bands.” —Lisa Flynn, Savage 3D

The bar officially closed up shop in 1996, and has remained closed ever since.  So how do the (former) regulars feel about its reopening?

“I love that The Boot is getting a new lease on life—it deserves it,” says Drake. Colonel Tom Sheehy, a veteran U Penn scholar and former music promoter, agrees. “This opening next month is further evidence of the strength and vitality of the Philadelphia music scene,” he says. “Having a reliable promoter at Broad and Ellsworth will stretch Philly’s musical reach south of Center City, where there is already a burgeoning musical presence. Yes, the hub of live shows in Philly will remain positioned north in Fishtown, with Johnny Brenda’s, The M Room, The Fire, and Kung Fu Necktie,” he continues—“but with the opening of Boot & Saddle … it’s going to be a great fall in Philadelphia.”

Boot & Saddle opens this coming Monday, September 9, with a performance from Aimee Mann and Ted Leo’s The Both. The full schedule of shows can be found here.