All photos by Michelle Montgomery | www.michellemontgomeryphotography.com

Last night the crowd of smitten Philadelphians was remarkable in size as The Avett Brothers headlined The Mann Center. 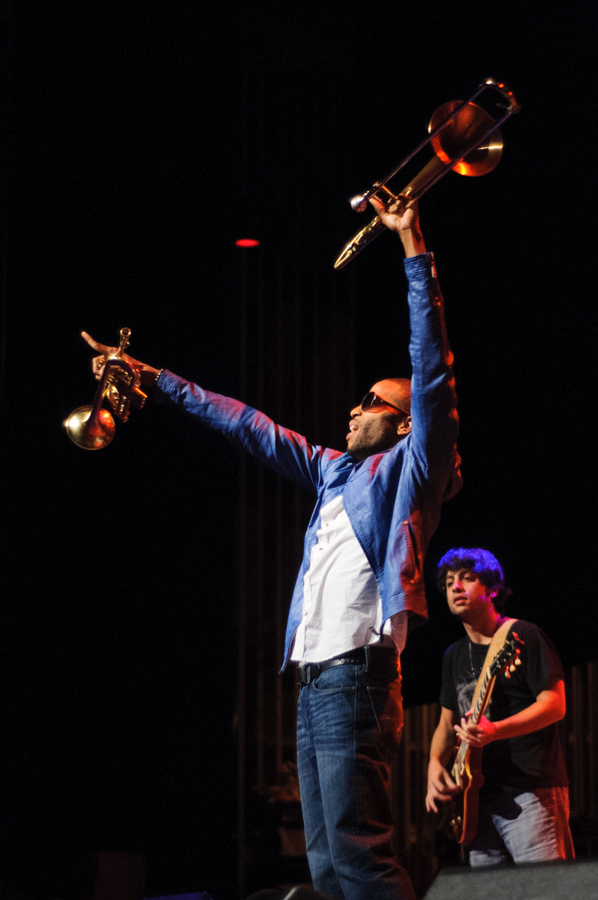 The hootenanny began with New Orleanian dance-funk extraordinaire Trombone Shorty warming up the stage. The center crowd was already on their feet boogieing to Shorty’s jazz-swing mix, cheering for every guitar solo, trumpet trill and trombone slide. Meanwhile, the people in the wings anxiously jostled in their spots to test their sightlines for the main act.

The lights dimed low and the crowd eagerly cheered to a still stage. A couple of minutes went by before Joe Kwon (cellist) and Mike Marsh (drummer) entered. Now feverish with anticipation, the crowd almost burst with excitement with when Bob Crawford (double bassist) and Scott and Seth Avett walked out and began the set with new single “Another is Waiting.”

The Avetts put on a delightfully nostalgic show, playing crowd favorites like “Live And Die” and “Down With The Shine” from last year’s The Carpenter, and many throwbacks from older albums including “Backwards With Time” (from The Gleam EP), “Gimmeakiss” (from Four Thieves Gone), “Die Die Die” (from Emotionalism), and “Pretty Girls At The Airport” (from Mignonette).

“We’ve been overseas, to Canada,” Scott Avett said between songs. “But playing in Philadelphia is like playing at home.”

Ending the set with the whole crowd chanting the “three words that became hard to say,” the Avetts ran off the stage shaking hands of the front row and anyone else that could squeeze their way up. The crowd called out for the band to reappear for an encore, and Seth came back to the mic, guitar in hand, to ask “Are you sure y’all want this?” Playing a Doc Watson cover, “Shady Grove,” and new song, “Vanity”, The Avett Brothers ended the night with “Head Full Of Doubt / Road Full Of Promise.” Implying a return in the future, Seth Avett called out, “Philly, we’ll see you soon!”

Below, check out a gallery of photos from both The Avett Brothers and Trombone Shorty’s set; after the jump, read the setlist and watch a collection of fan videos from the show.

Set List
Another Is Waiting
Go To Sleep
Live and Die
Wanted Man (Doc Watson cover)
The Once and Future Carpenter
Down With The Shine
Gimmeakiss
Pretty Girl From Chile
Backwards With Time
Just A Closer Walk With Thee (traditional)
A Father’s First Spring
Die Die Die
Laundry Room
Old Joe Clark
Will You Return?
Pretty Girl At The Airport
The Perfect Space
The Prettiest Thing (David Childers & The Modern Don Juans cover)
Kick Drum Heart
I and Love And You