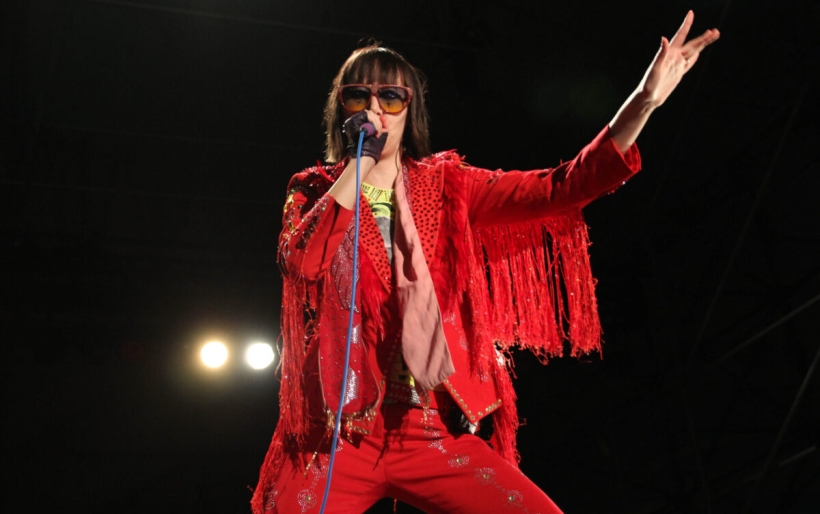 An explosive night on the river with Yeah Yeah Yeahs (photos, review, setlist)

All photos by Rachel Barrish | raddrhapsodies.com

On Tuesday night as Autumn fell upon us, the rockin’ NYC troupe Yeah Yeah Yeahs played a packed set at the River Stage at Penn’s Landing. Simply because it was a Tuesday night and an outdoor show, the evening ended just as the clock struck 10 p.m. But they didn’t let the early curfew stop them from playing favorites from their 2004 release Fever to Tell such as “Man” followed by an encore of “Maps” (of course) and ending with “Date with the Night”. YYY’s also performed new songs from their most recent release Mosquito that only a select few in the crowd picked up on lyrics-wise, but everyone still jumped up and down dancing and head bobbin’. Karen O ceased to to let the crowd down, entertaining while putting the microphone in her mouth…and in her pants. She emerged in her signature red fringed jacket and changing twice into her KO leather jacket and into a silver shiny overcoat. The fun didn’t stop when a cloud of paper white “Y”‘s exploded from the stage onto the audience. Check out photos from the set below, and read the setlist after the jump.

Encore:
Maps
Date With the Night