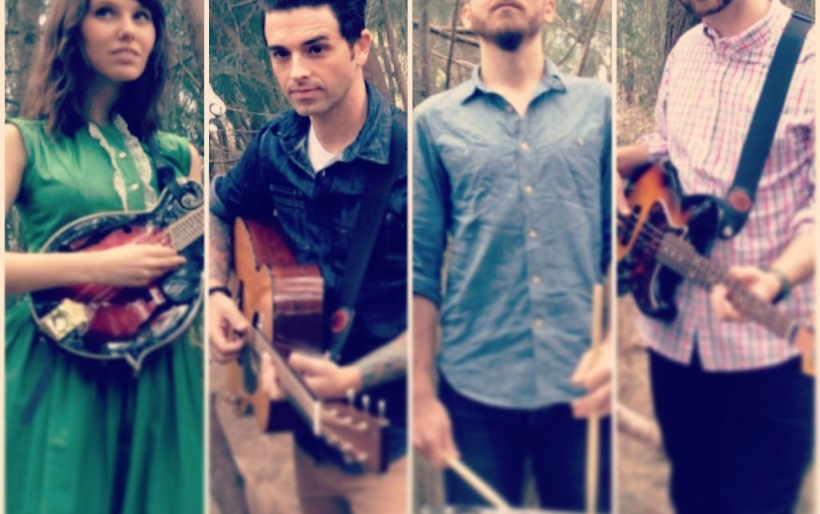 The need to forage a new path wasn’t just a feeling for Chris Carrabba – it came to him in signs.

The singer/songwriter behind popular acoustic emo rock act Dashboard Confessional was struggling with the process of writing the band’s seventh record. He felt confined by self-imposed parameters of storytelling and song structure, but forged ahead. Until his hard drive crashed. The recordings were virtually erased.

“I kind of half took it as a sign and half got back on my horse and started recording them over,” Carrabba recalls. “Then the garage that we were recording in flooded, and I was like ‘Alright, that’s two signs now.’ I started looking for a new pathway into writing songs. This is the ultimate result of that, but the road was really winding to get to Twin Forks.”

Twin Forks is Carrabba’s new rootsy pop-folk project. He sings about following signs and a long winding road in the song “Back To You” off of the band’s debut EP released last week. Instead of a lone, somber acoustic line or a dense, layered alt-rock backdrop that might have joined his voice on a Dashboard song, Twin Forks finds Carrabba belting along to a chorus of fast-picking banjos, guitars, whistles and handclaps.

His new pathway into songwriting was going back to his folk roots. In starting over after the failed Dashboard album, he also began experimenting with Travis picking and emulating the “delicate” folk singers he loved listening to growing up.

“I became enamored with that playing style, so I really delved into it and tried to really be creative within that,” he says. “Then, I wrote almost a record worth of that more delicate Nick Drake, Neil Halstead kind of songs.”

To fill out the band, Carrabba called on friends Jonathan Clark on bass (who also produced the record), Ben Homola on drums (of Bad Books, and formerly Manchester Orchestra) and Suzie Zeldin on mandolin (formerly of The Narrative). All members were initially too busy with other projects to commit to Twin Forks, but after playing a “celebratory” cover set at the 2012 Hardly Strictly Bluegrass Festival in San Francisco filled with “boot-stomping, hand-clapping” arrangements, Carrabba says they all knew they were on to something special.

The recording process with Twin Forks was much different for Carrabba then for other projects. Dashboard’s highly acclaimed debut The Swiss Army Romance was carefully and painstakingly recorded by an inexperienced Carrabba over two nights in the producer’s home. Later albums, featuring much more instrumentation, were mapped out well before the band made it into the studio.

“The way we did this record was I would write a song, record a vocal and a guitar, and I’d hand it over to everybody in the room and say let’s listen to this for the afternoon,” Carrabba says. “Everybody would listen to it a few times, and then we’d go into the garage, start playing and record it, record it live. … You can hear us all over the record cheering and hooting for each other, none of us obviously having ever played the song before we recorded it knew what anybody else was going to do so when we heard them do it, we kind of couldn’t contain ourselves. If you listen closely, you can hear all that stuff on the record. And that’s the stuff I think people try really carefully, or I’ve tried in the past really carefully, to make sure it didn’t get on the record.”

That infectious energy carries over into the band’s live show, and local fans can experience it for themselves when Twin Forks headlines a show at 7 p.m. at the North Star Bar. The band will play songs from the new EP and more than a few covers.

“Whatever is the most fun thing, that’s what we’re going to do,” Carrabba says. “We play covers because we get a kick out of it or we think the audience will. I think it’s a real celebratory kind of show, like an old-school barnstormers kind of thing, or a dance hall kind of thing.”

And though they want to be sure people know they’re at a Twin Forks show, Carrabba says the band doesn’t steer clear of playing Dashboard songs.

“We Fork it up a little bit,” he adds. “By virtue of the players, it’s going to be different.”

Despite its divergence from his past material, and whether it was by chance or an inevitable stage in his musical maturity, Carrabba says the music of Twin Forks is a true reflection of who he is right now.

“I think there are a lot of ties between folk music and punk rock,” he says. “They were counterculture in their era, folk musicians. Also, if you sing a brogue with electric guitars, it pretty much sounds like a punk song. I guess there’s a lot of similarities there.”

Between folk rock and a hardcore place, music lovers should laud Carrabba for taking the road less traveled.