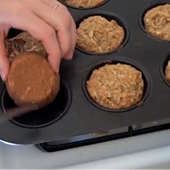 While chatting with Buried Beds about their influences and inspiration the other week (see Thursday’s interview, here), Brandon and Eliza let slip a very interesting secret. It turns out that the band harbors secret baking aspirations…and has even dreamed of one day hosting their owning cooking show! These aspirations, at one point, led the band to film their own cooking segment, an experience the band describes as universally disastrous.

It all went down several years ago, in the era of flip cameras (“I had this flip camera and I was like, ‘I can totally be a film maker!’” explains Beaver), and was derailed once the band started drinking partway through. Beaver describes the harrowing events with glee. “We even had a performance in the middle of it,” he continues. “We were like, ‘Buried Beds will now perform!’ It was one of the most embarrassing things I’ve ever seen. At one point I pick up a trumpet and start playing trumpet—I’m like, what am I doing? Terrible.”

The footage from that night will never see the light of day again…but to satiate curious minds, Beaver and Jones put together a newcooking segment, featuring Jones’s favorite recipe for Slammin Apple Muffinz. Just look at how they nourish a hungry Beaver!

This concludes our Unlocked series on Buried BedsIn Spirit, out this week. Revisit the past week’s worth of posts, including Monday’s song download, Tuesday’s record review, Wednesday’s music video premiere, and Thursday’s interview and stay tuned for more Unlocked—our monthly spotlight of new and notable releases from local artists—here.