Screaming Females, Waxahatchee and more wrap the Don Giovanni Records tour with a bang at The Church - WXPN

Screaming Females, Waxahatchee and more wrap the Don Giovanni Records tour with a bang at The Church
Artists

Screaming Females, Waxahatchee and more wrap the Don Giovanni Records tour with a bang at The Church

Four bands rocked First Unitarian Church to the core on Sunday night on the final stop of the Don Giovanni Records tour of Screaming Females with Waxahatchee, Tenement, and Trophy Wife. The night got under way on the basement floor where the dynamic duo of Philadelphia’s own Trophy Wife – drummer Katy Otto and guitarist Diane Foglizzo – took the breath away of all in attendance. It was this critic’s third time seeing them live and with each new performance, their rock prowess seems to grow exponentially. They are one of Philly’s greatest music treasures.

Next up was Wisconsin’s punkers Tenement. They were brash and energized, with lead singer and guitarist Amos Pitsch pouring every ounce of sweat into their set. They certainly know how to get the crowd moving, but their aesthetic is one of style over substance, so before one knew it they were gone.

Philly’s own Waxahatchee brought their indie cred to the forefront of the barely lit church stage. Band kingpin Katie Crutchfield and company unleashed tracks mainly from their 2013 masterpiece Cerulean Salt. The angular rock was the night’s counter to the punk and hard rock of the other three bands. Their set was a memorable slice of the contemporary hip.

The finale of Screaming Females was a culmination of the night’s styles, from the shredding expertise of Trophy Wife’s Foglizzo to the punk of Tenement and a dash of the present and future combined as found in Waxahatchee. Led by the mesmerizing Marissa Paternoster, they transported the packed basement of sweaty mostly twenty and thirtysomethings to the raw center of the desired elixir of perfect parts guitar, drum, and vocal. Swallowing the microphone and using her guitar as an axe of grand sound, Paternoster stirred the audience into a moshing frenzy that carried through to the end.

This was the 7th show in 10 days for this critic and the one I was looking forward to the most for the total music experience. It certainly lived up to and exceeded these expectations. 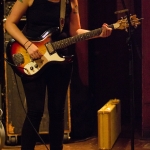