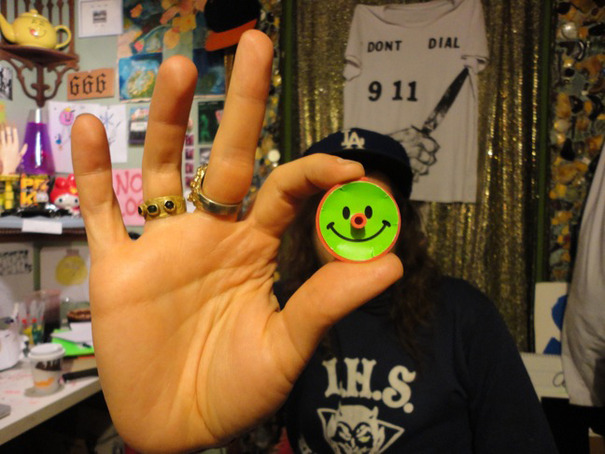 There’s something cartoonish about King Tuff. Most of his album art portrays hand-scratched drawings of large-nosed longhairs and magic bats. In his music videos, a paint stick follows him around to shimmer the scene neon every once in awhile. His band could also emanate this kiddishness, with make-believe aliases like Magic Jake (his bassist), and Captain Cox (his engineer). But there’s something about his sound, too, that illustrates him. It’s this rabbit-from-a-hat sonic madness of hard drum patterns and fuzzed-out electric guitars. It’s also his voice, which until you see him live doesn’t quite make sense — like a hoarse Alvin the Chipmunk might sound when you slow down the recording just enough so that it could be considered human.

This year, his 2008 record, Was Dead, was reissued and released on Burger Records — for which anyone with footing in the sounds of all of those fuzzed-out garbage pail kids coming in from the West Coast (Ty Segall, No Bunny, WAVVES, the Memories, et al.) should be eternally grateful. It is a record filled with a series of hooks strung together in one cleverly-crafted album. There’s nothing to skip, it’s all here re-packaged in a vibrant blue sleeve with the hot pink scribble-scrabbled face of King Tuff himself.

“I recorded Was Dead with my friend in a giant ballroom, this was was in Vermont,” Kyle “King Tuff” Thomas explains over the phone last month. The longtime guitarist and songwriter moved from Vermont to Los Angeles a little over two years ago and jokes “I haven’t done shit since I got to LA… just frying my mind in the rays.”

Actually, after Tuff signed to Sub Pop Records in 2010, he’s pretty much been touring straight through the years. Often away from the harsh California rays. It was a much needed break considering the lifeline Tuff has had with his guitar and songwriting.

“I started playing guitar and drums in elementary school and so I was already writing or at least attempting in like 5th or 6th grade,” he says, “I could only play one string at a time. At one point, and I didn’t even know what a chord was. I never took a lesson in my life really, I got into middle school and found some like-minded people and started a punk band and it kind of grew up from there. It was called the Ludicrous,” well before the Def Jam rapper, Ludacris, came to be a household name.

Tuff is giggly over the phone when he mentions the first song he ever wrote in elementary school, but only after I ask what it was called.

“‘Pickle Boy,’ which was an extension of myself which was a song about a love of pickles,” he pretend-philosophizes. That’s about the point when I realize that if King Tuff does have some of the characteristics of a person with a diluted sense of reality — a kind of “head in the stars” or “too stoned all the time” being — he also knows how to bring himself back down to earth. He can find his way through his real and imaginary worlds filled with sun medallions, electric star rays, dreaming in a graveyard,  and eating pizza all the time. He doesn’t take himself too seriously, and his music — which he does — is the type of style he believes is long due for a resurgence, an attitude adjustment.

“I think [music] doesn’t have to be fun, I like a lot of stuff that’s bad or, you know, I like all kinds of music but rock and roll — at least the kind that I come from — it’s the more cartoonish or outrageous the better. You look at all the classic bands — and I was just talking about this [recently] if you can turn a band into a cartoon easily, that’s always usually a good thing — the Beatles, AC/DC, The Ramones, they’re all kind of cartoons you know?”

Literally and figuratively, the Beatles starred in their own cartoon film, Yellow Submarine, and were portrayed as animations often. The Ramones, the Rock ‘N’ Roll High School alumni, same thing — long haired, stick legged rock caricatures. It’s no coincidence that groups like these also performed with the same vigor and satire.

“That’s something that’s been missing for a long while. There’s just been kind of this cold quality to indie music where there’s a lot of good stuff but not the fun aspect to it. When people go to a show, they want to have a good time and they want to be entertained and when I’m playing a show I want to be entertained too so I kind of entertain myself. I’m always cracking up on stage. If I just look over at one of my band mates… I just crack up,” says Tuff.

Now, after all of that cracking up on stage and hootin’ and hollerin’ with his lovely band of super hero misfits, he’s ready to record again. “I’ve been touring for two years now so it’s time, I’m feeling a creative urge and I really want to get back to making stuff and in some ways things are very rewarding but when I made a song it’s just a great feeling.”

Where Was Dead was a collection of songs that he’d developed for over three years, sat on for a few more and recorded and released half a decade later, his new full length (which he hasn’t got a name for yet) will be a product of more studio time and less in-between time.

“It will be a new experience, catch [the songs] as they come,” he says. Just like that Tom cat is always trying to catch that pesky mouse, hopefully King Tuff has better luck.

King Tuff performs at the First Unitarian Church, 2125 Chestnut Street, with Wavves and Jacuzzi Boys tomorrow, October 2nd. Tickets and information on the all-ages show can be found here.