“I just want to clear the air,” remarked Philly punk singer / songwriter Dave Hause. “And let everyone in the room know that my old man is the best man standing.” Hause was speaking to the crowd at today’s Free at Noon concert – of which his dad was a part – just before performing “Father’s Son” off of his new album Devour, due out October 8th on Rise Records. But that expression doesn’t necessarily apply to this father and son; he said his high-maintenance nature growing up was balanced by his dad’s laid-back personality.

Performing an exquisite solo acoustic set, filled with a guest appearance by his brother and a surprise mini encore, Hause warmed up the Philly crowd before his two sold out shows in the sanctuary of the First Unitarian Church’s side chapel on the new album’s release day. Despite being a “man with his guitar” act, Hause easily got the whole crowd to clap and sing along to his provoking punk melodies and infectious enthusiasm. Wasting no time, he has already announced a return appearance to Philadelphia – he’ll be at World Cafe Live on Sunday, April 6th, 2014. Tickets go on sale next Friday, October 11th via Ticketfly. Check out a photo gallery from Free at noon and the set list below, and listen to Hause’s set in its entirety here (via the WXPN media player). 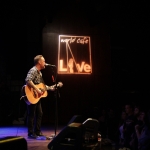