Philadelphia songwriter / improv-artist Chris Coyle musters up a quirky falsetto to reenact the excited voice of one of his clients in Boston, who inspired one of his songs. With a genuine smile and a smooth tenor tone, Coyle explains that many people are naturally attracted to the keys because they are so conducive to experimentation.

“It’s lined up,” he says. “It’s very visual. Obviously there is a technique to it if you want to study that, but you can pick notes with your fingers and it’s very physical and very easy to kind of experiment. Anyone can express themselves to some degree on a piano.”

For about two years, Coyle has been working within arts-based facilities providing opportunities for adults with developmental and physical disabilities. While leading musical workshops, he was blown away by the visual art that was made by the participants in the programs, and began working more closely with them.

Others might call them “students,” but these are the people Coyle prefers to think of as “clents.” Perhaps another appropriate word might be “collaborators.” Inspired by the personalities he encountered, Coyle started his own project called Outside Sound, creating multi-media performances that set the artwork of these students to Coyle’s original music. 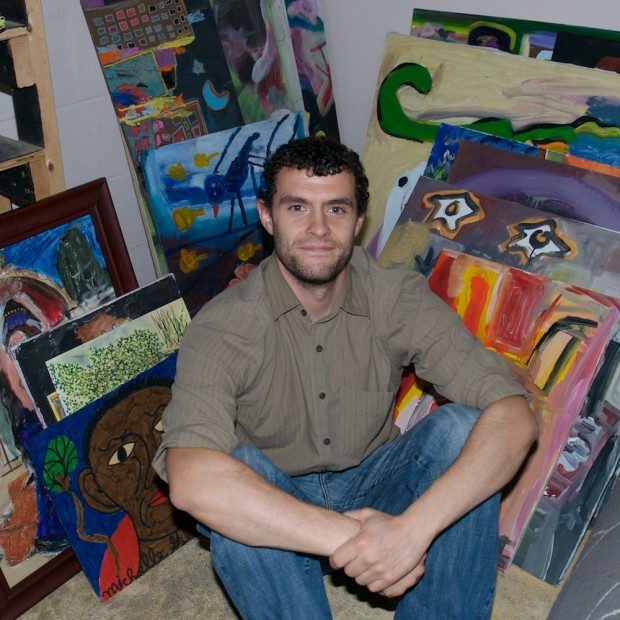 A piano player from the young age of five, Coyle has developed a great sense of mixing unfamiliar elements with elements that “really hit home.” Although he describes himself as an audiophile, a lover of many genres of music, he found a strong connection with jazz as a teenager. “It seemed like the end all, be all of creativity.” Admitting that he never had too specific of an idea of where he wanted his music career to go, Coyle talks about dipping his hand into many different projects (including Son Step, Noggin Hill, Notsosilentcinema, and Rhinoceri Trio) and jumping around the different jazz circles of Philadelphia. Coyle also began substitute teaching at  Philly Youth Orchestra and Play On Philly and creating his own musical workshops to “prod other musicians or other students in a way, that I can tell, might challenge them.”

Although he has taught a few disabled students in a one-on-one setting, his first real experience of conducting a workshop with disabled individuals was about two years ago at the Center for Creative Works (previously called the Lower Merion Vocational Training Center). Working there part-time, he was surprised that the facility gave him almost free reign in creating a curriculum, and a small budget to get instruments. But what stuck with him even more was the artwork he encountered when he arrived. “To see people that on the surface seem deeply challenged or have different issues going on, you know mentally, physically, or a combination of all of those, to see them do some of the artwork that I thought was the best I’ve ever seen was pretty amazing, and also to see how their personalities come out in their artwork too.” Walking towards the Center for Creative Works, it looks like any other building along the street. Before it became the vocational training center, it was a mechanic garage, which you can tell by the large, folding windows around the side into the main working floor. After a couple of years of renovations, the building was re-opened as a vocational center, providing disabled community members with simplistic jobs of stuffing envelopes, packaging packets, etc. that both funded the center and gave the participants a pay check. However, with the economy growing worse, those vocational jobs became scarcer.

The center then took a creative turn, opening a multi-area art facility (including a ceramic studio and a screen printing lab) and offering participants  a more therapeutic, arts-based program, with the results on display all over the building. A sculpted, colorful seahorse hangs from the ceiling, the garage windows are covered in window-marker drawings, drawing and paintings are mounted on the walls, and even a small gallery featuring one artist’s work every month or so can be seen on the left wall as you walk in. In between the few odd jobs that come along each year, the group sells home-made dog treats and screen-printed bags and shirts, and accepts donations to help fund the non-profit organization. With the center providing different art galleries and events through the year to show off what all they do, Coyle has helped raise awareness of such facilities and the individuals involved his own way.

Coming into contact with the artwork immediately as he started working, Coyle began to hear music in his head that could enhance the art pieces. “The more that I was exposed to it I kinda couldn’t help thinking about ‘Wow, how cool would it be to not just make music that enhances the artwork, but also involve them in that process? To see how their personalities and their ideas could shape the music also, and how their performing could also shape that music.’”

Getting grants from the American Composer’s Forum to fund Outside Sound, Coyle has worked on writing music inspired by the art, and sampling his clients’ musical talents while conducting the intensive workshops. Then in performance, Coyle provides a mixed-media event, projecting the artwork over top of a live band playing the experimental, jazz-based music underneath, and a small visual art gallery to walk though. Many times, the music follows different artists work that all fall under a theme or concentrates on different areas of a collaborative work, like in “So Many Faces.” “Alonzo’s Portraits” is a jazzed-up, plunking melody that intuitively plays under the linear ink drawings of Alonzo Humphries. Sometimes Coyle music is accompanied by recorded dialogue or workshop samples to see the internal personalities of the clients (seen in pieces like the aforementioned “Take Me To The Piano”). A deeper look into what these facilities provide is shown in a presentation with documentary videos of the participants.

In addition to working part-time with the members of the Center for Creative Works, who Coyle says are “like a family” to him, the project’s funding has allowed Outside Sound to reach out to other facilities, such as the Oasis Art Center in Center City Philadelphia, Outside the Lines in Boston, and recently three residency programs in Minnesota, where Coyle conducted workshops from July to September.

To get as much participation of the disabled participants as he can, and receiving some extra funding from different donors, Coyle hopes to bring his clients, one day, on a “field trip” to a studio, or even to get them out to perform at the concerts. “There are many reasons why that is difficult,” Coyle says, explaining that there may be limitations with taking certain individuals out at night or away from their normal routine. But his speaking gets more excited as he talks about all the possibilities of having a studio space and all that could happen if the grants and donations still provide funding for the project.

“Every year, stuff just goes in different directions. And you can either accept that and get really excited about it, or you could, you know, or you could not be that way,” Coyle says. “I’ve definitely learned that while you have good momentum with a project that’s really great, just drive into it and see where you can take it.”

See Coyle perform with NotSoSilentCinema October 25th at PhilaMOCA for a double showing of “The Cabinet Of Dr. Caligari” (at 7:30 p.m. and 10 p.m.). Tickets and details can be found here. Keep up with his other appearances here.