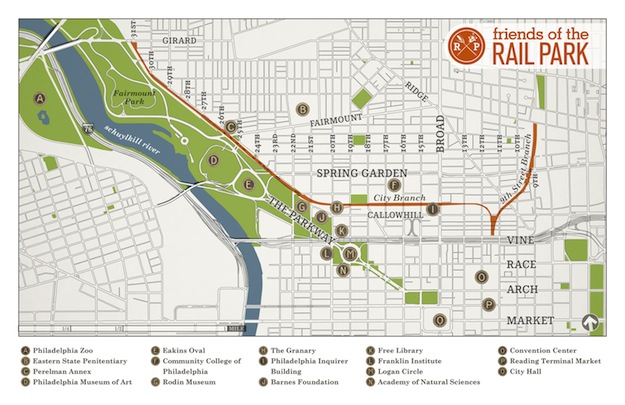 The Walkmen, Sun Ra Arkestra, Sharon Van Etten, Spank Rock, Light Heat, Jeff Ziegler and Mary Lattimore, Birdie Busch, and the Dufalo Brothers are playing Union Transfer on Wednesday, December 4th. The show is a benefit for Phase One of the Rail Park with all the proceeds going to the Friends of the Rail Park, a non-profit that has been advocating the planning, designing and envisioning of a continuous 3-mile linear park along the former Philadelphia & Reading Rail line corridor. Friends of the Rail Park outlined their vision and plans last Spring, outlined in this article about it in Hidden City Philadelphia. Nathaniel Popkin writes:

The proposed park meets the elevated Reading Viaduct just east of and directly below Broad Street at the section of the railway known as the SEPTA Spur. The 1/5 mile long, elevated Spur–which will undergo an $8 million transformation into a park beginning in 2014–together with the City Branch, which is also owned predominantly by SEPTA, would constitute a two mile long linear rails-to-trails park, connecting the Callowhill neighborhood to Fairmount Park. The rest of the railroad viaduct heading north from the SEPTA Spur is owned by the Reading Corporation. The firm, based in California, has demonstrated little interest in selling the Viaduct to the City of Philadelphia.

The new below-grade park would extend from two points at the east end: the connection to the SEPTA Spur, where the rail viaduct dips under Broad Street (which is a bridge over the railway) and at Broad and Buttonwood in front of the School District Administration building. A key to the plan is the planned reconstruction of the Broad Street bridge, owned by PennDOT. Planners hope to convince the agency to install see-through railings and to puncture the bridge with light towers that are to be installed in the center of North Broad (lighting the space above and below). The parking lot now in front of the School District building would be replaced with a multi-level public space leading to the park.

Take a tour of the proposed Rail Park in this video below.