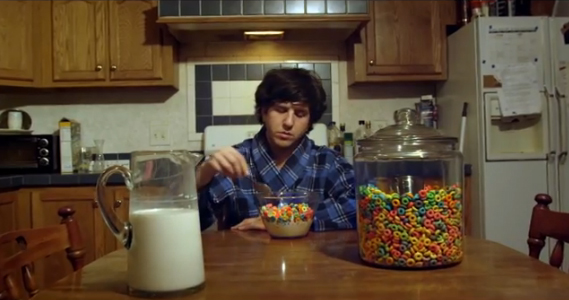 Dr. Dog drummer Eric Slick has been on something of a creative streak from both behind the drum kit (the band’s great new record B-Room) and away from it. Last night, he shared a surreal music video for his new solo song “Release.” Musically, it’s is a contemplative instrumental featuring fingerpicked acoustic guitar, similar to but more refined than the “Creature Comfort” track he put on Bandcamp in June.

Visually, it’s an unsettling bud oddly comical trip into the human psyche via a bowl of Fruit Loops. Like the short film Primal Essence thatSlick premiered at The Key’s Tuesday Tune-Out back in January, this video – directed by by Zia Anger and Miles Joris-Peyrafitte – begins in a slightly askew real world with Slick just awake, doing morning things like eating breakfast. As soon as he’s finished, his world becomes a dream-like state.

“Release” will be featured on Slick’s debut solo guitar LP <em>Out of Habit</em>, which will be available on limited edition vinyl and cassette via Solid Gold Record. Preorders are available at the label’s website.