Many of us watched, enthralled, as the Arab Spring swept through Egypt in 2011. But the protests and violence took on an even deeper resonance for Baltimore-based composer and bass clarinetist Todd Marcus. The son of an Egyptian father and an American mother, Marcus knew the country firsthand from visits to family in Cairo.

“I watched things happen in 2011 and ongoing with cautious enthusiasm or optimism,” Marcus says. “There’s been a lot of nervous anticipation as well as fear over some of the challenges. I was able to have conversations with family there and see the impact on them of the transition from what was normalcy to the breakdown of a lot of basic services. Things remain very precarious now. It’s been tough.”

Watching events unfold from afar, Marcus has channeled that range of emotions into a new composition, the “Blues for Tahrir Suite,” which he’ll perform on Friday night at Chris’ Jazz Café, a few days prior to recording the music for a new album in a Washington, D.C. studio.

Named for Tahrir Square, the locus of the Egyptian revolution in Cairo, the suite continues Marcus’ fusion of jazz with Middle Eastern music inspired by his heritage.

“I grew up in northern New Jersey without any Middle Eastern or Egyptian community or culture around,” Marcus recalls. “But as I got a little older and more mature, I started to take my heritage a little more seriously. As a musician, the prime area for that was to explore Middle Eastern music, and I found that I really liked the epic compositions and arrangements of Middle Eastern classical music, which tend to have a lot of different movements that really take you on a journey.”

The “Blues for Tahrir Suite” is meant to exhibit multiple facets of the Arab Spring; it starts with a movement inspired by the Islamic call to prayer which is sung through loudspeakers five times a day in Muslim countries and, according to Marcus, “is such a fabric of the landscape.” The piece then cycles through a more aggressive section entitled “Protest” and a contemplative movement, “Reflections.” Marcus says, “I guess it’s the power of music, the ability to take a lot of those tensions and find some beauty in them. It’s been my goal to try to put those different moods into music and then let it speak for itself.”

The suite was penned for the Todd Marcus Jazz Orchestra, the nonet that Marcus has led for the last decade. The six-horn ensemble allows the composer to explore his penchant for interwoven melodies and densely layered compositions. Despite the challenge of maintaining a large band, Marcus says, “It’s that best of both worlds: you have the potential for the power and force of a large ensemble but also the ability to really explore as a soloist and come up with something heavy and deep.”

Encouraged to play music by his pianist mother, Marcus chose the clarinet in fourth grade and followed a classical music path through high school, discouraged from exploring jazz by a school band director who preferred his clarinet in the orchestra. He moved to Baltimore in 1994 to study political science and began branching into the jazz scene on the side, switching his focus to the bass clarinet in 1997 after a friend exposed him to the music of Eric Dolphy. “Hearing Dolphy play the bass clarinet,” Marcus says, “I realized that it had so many more colors and possibilities, so I switched over.” 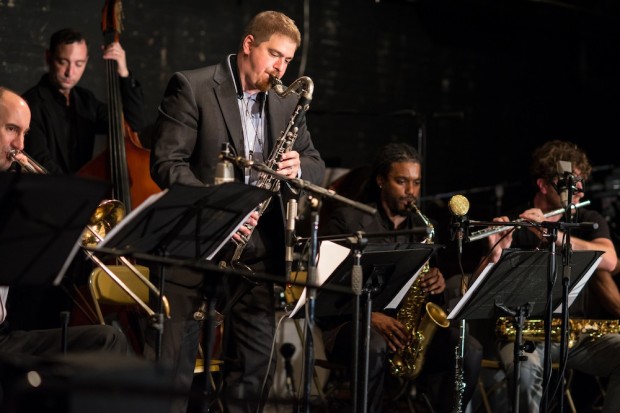 During his time at Loyola, Marcus began volunteering for a local chapter of Habitat for Humanity, where he formed ties with Revered C.W. Harris, a local community leader. Together, the two founded Newborn Holistic Ministries, a nonprofit organization that deals with poverty-related issues in Marcus’ Baltimore community. Marcus switched his major to urban studies and continues to help run the organization while pursuing his musical endeavors.

The “Blues for Tahrir Suite” is, then, a bringing together of Marcus’ varied interests: his Egyptian heritage, his education in political science, his community-based endeavors, and, of course, his music.

“It merges all the things I’m passionate about,” he says. “Jazz has always been a social music. It may be harder financially to keep a large group going, but if you can do it there’s a serious community aspect that happens in bringing a lot of musicians together.”