Eight artists that surprised us at SXSW - WXPN

Eight artists that surprised us at SXSW
Artists

Eight artists that surprised us at SXSW

It’s been almost a week since the four-day nonstop multisensory rush that was the 2014 editon of Austin’s annual South by Southwest music conference, which has given me just about enough time to catch up on sleep, edit my way through thousands of photos and sort out my thoughts about the experience. Here are eight artists that grabbed my attention at this year’s SXSW, beginning with the woman you see above.

Kelis – The transformation of the onetime “Milkshake” hitmaker didn’t take me as unawares as it may have taken other festival-goers. A few years back, I caught her on tour with Robyn at The Trocadero, and saw that she’d moved on from her bubblegum dance days to a sleek and more sophisticated electropop sound. But still, this was impressive – her backing band was a dozen members strong, it had a sharp horn section and a disco-funk sound to die for, and the singer had enough awareness of nostalgia’s power that she dropped “Milkshake” in the final third of her late-night Friday set at the Hype Hotel. Which was totally fun, but it would have been a powerful performance without. Her sixth album, Food, was produced by Dave Sitek of TV on the Radio and is out April 18th on Ninja Tune Records. 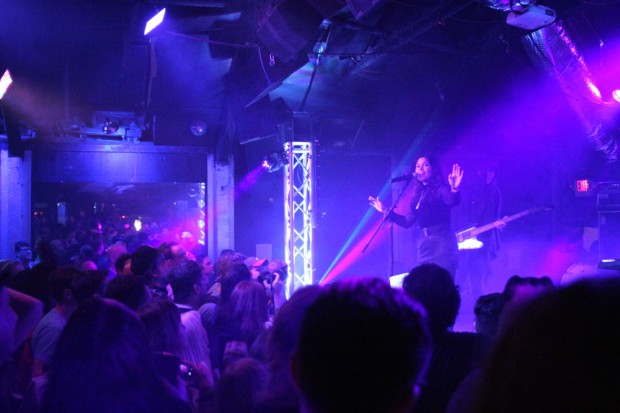 Feathers – These Austin locals just got off a European tour opening for Depeche Mode, and their sound sits nicely alongside the 80s icons’ dark synth-dance tones. I caught them Saturday at the goth-leaning Red River club Elysium, and frontwoman Anastasia Dimou freaking owned the packed room. While their sound is decidedly hard-hitting, she has the presence and command of a pop singer – or, say, an alt-pop singer a la Emily Haines of Metric. Even when the power momentarily cut out, Dimou kept singing a cappella and off mic. Their Only One EP dropped in January. 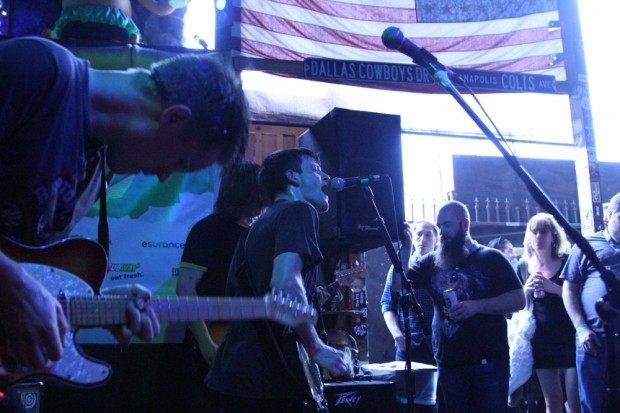 Pup – Okay, confession time. I kind of went into SXSW knowing I was going to love Toronto’s Pup. I’ve been listening to an advance copy of their self-titled debut (due out on SideOneDummy records next month) on long distance runs since early February. But I didn’t expect them to be so…tight, and together, and totally engrossing as a live band. It’s the kind of raw and aggressive punk rock that sounds like the band is teetering on the edge of chaos, and I half expected the live show at Headhunters’ Patio to be a hot mess not unlike the Palma Violets house show I saw last year. But the band pushed their set to that edge, but never over, and the resulting set won the packed room over. They play Golden Tea House tonight. 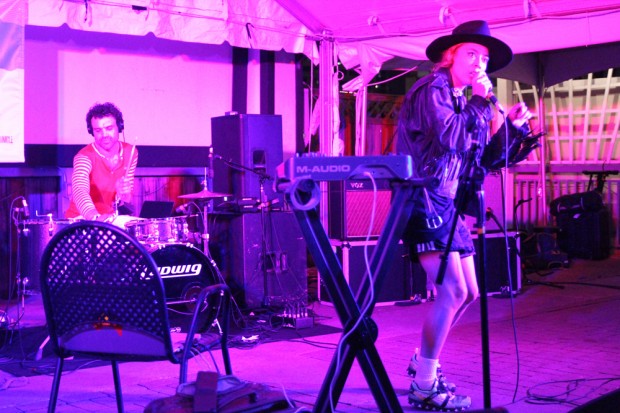 Chela – I saw Mellbourne electropop singer Chela (pronounced like “yella” and sounding roughly in the same ballpark as Yelle) completely by accident. On Saturday night I made my way into the Maggie May’s rooftop stage, not with any awareness of the show going on, but to recreate a photo of Sixth Street I took a month ago for World Cafe. After squeezing to the balcony, getting shots of the madness below, watching a drumline work the throngs while finishing a can of Austin Brew Works IPA, I made my way back to the stairs and noticed the very stylish and charismatic sounds coming from the other side of the room. Performing with just a drummer and a synthesizer, Chela strutted and sang like a young version of her countrymate Kylie Minogue; the two songs I saw was barely enough. Her Romanticise EP came out last summer. 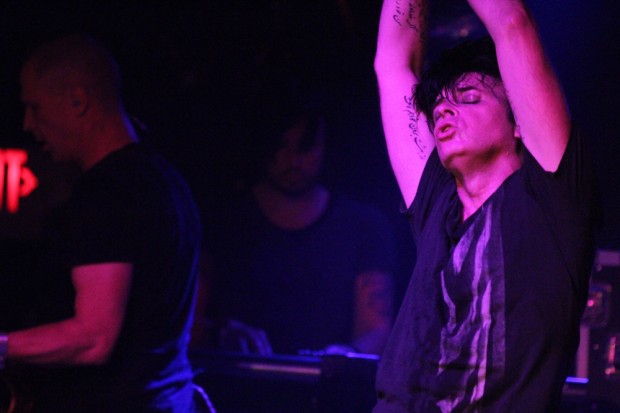 Gary Numan – Again, a show I saw completely by accident. I was at the Moog / Switched-On showcase at Elysium (where Feathers also played) to see EMA. Who, alas, was massively disappointing. But I stuck around because hey, when am I going to get a chance to see headliner and 80s icon Gary Numan again? (As it turns out, tomorrow night at The Trocadero.) Late last year, Numan released his twentieth studio album, Splinter (Songs from a Broken Mind), and the earlier part of the setlist alternated between selections from it and classics from 1979’s The Pleasure Principle (“Metal,” “Films”). What was most surreal was the way the new material was very driving and 90s industrial rock in tone, a la Pretty Hate Machine, whereas the classic stuff was amped-up to match. So in a weird way, me being somebody who didn’t experience the singer on the first go-round, the show was like watching Numan ripping off Trent Reznor ripping off Gary Numan – right down to the microphone-gripping, body-contorting stage moves. Perhaps it’s more accurate to say Numan was taking his style back, or Numan was simply being Numan. Whatever the case, the set was a rager. 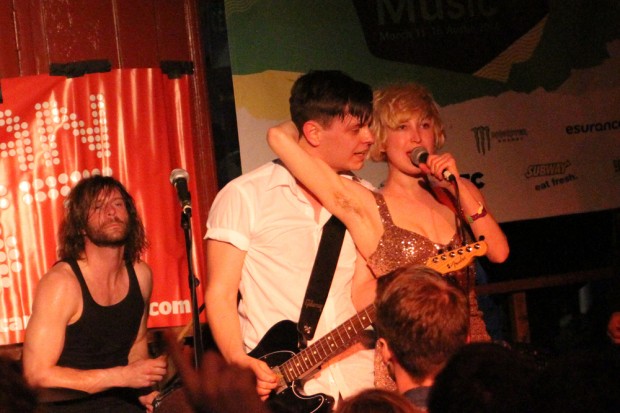 July Talk – Part of my task at SXSW this year was catching up with artists the World Cafe team learned about on its Sense of Place: Toronto excursion. Pup was one of those artists, as they were recommended to us by blogger Frank Yang of Chromewaves, whereas July Talk was a band we recorded an asskicking Cafe session with. Their sound is a rowdy mix of Tom Waits’ primal barroom rock (that’s care of singer-guitarist Peter Dreimanis) with the ethereal tones of Denali (singer Leah Fay), and it works well when the crowd has been imbibing heavily and gives the band that messy energy to feed off of. The biggest surprise from this crew: when I met them in Toronto and shot the video you see below, they were very reserved, almost shy. In front of packed 6th Street club Friends, they were freaking intense. Their self-titled album was released in October. 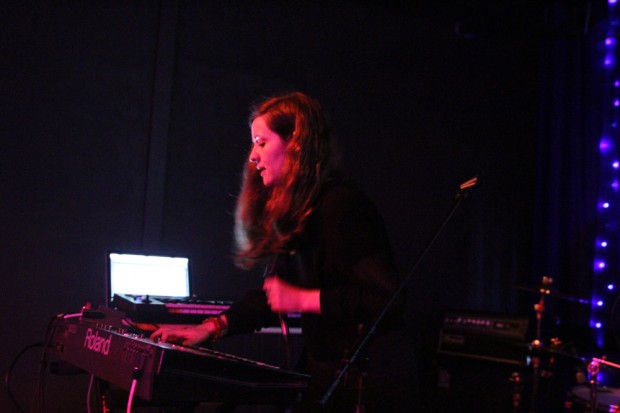 Jessy Lanza – Another artist from Project Canadian Catch-up, this Hamilton electronic artist (it was a good SXSW for electro-pop) came recommended care of Broken Social Scene’s Brendan Canning. We had just missed Lanza playing an album-release set in Toronto, so I made up for it by catching her Friday showcase at a Sixth Street venue called (I kid you not) the Velveeta Room. Had we seen the hometown-ish show, it would have been a packed house, but as Lanza is still a relatively unknown entity in the states, her showcase was somewhat thinly attended. Disappointingly so, as her juggling of sample-triggering and keyboard beds with acrobatic, Mariah-esque vocals was impressive. Kind of like a more focused and pop-oriented Grimes. Her LP Pull My Hair Back was released in October. 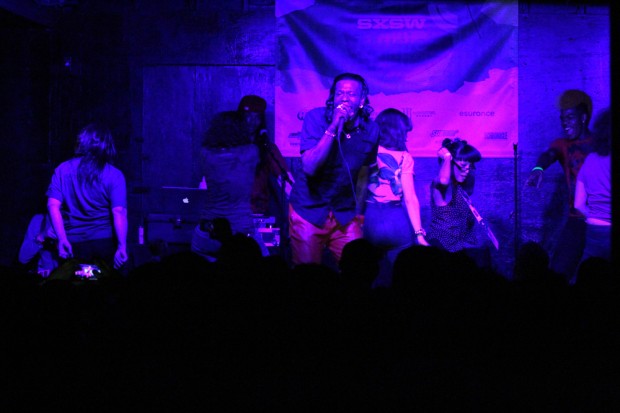 Big Freedia – The last, absolute LAST place I expected to be on Thursday night was seeing a set by New Orleans’ self-proclaimed Queen of Bounce. The last people I expected to be seeing said set with was every single one of my coworkers from XPN. But, you know, peer pressure and all. It was actually a massively fun spectacle…and astonishingly athletic at that! Don’t let anyone tell you otherwise.