"A mix of sleaziness and professionalism": Philly artists weigh in on their SXSW experience - WXPN | Vinyl At Heart

“A mix of sleaziness and professionalism”: Philly artists weigh in on their SXSW experience
Artists

“A mix of sleaziness and professionalism”: Philly artists weigh in on their SXSW experience

The rickety van piloted by Philly psych-thrash outfit Ruby the Hatchet rolled into Austin just a few hours before its first South By Southwest gig last week. Cutting it close, for sure, but the band was just happy to arrive.

“We broke down,” guitarist John Scarperia explained as he set up for the End Records showcase at LIT Lounge. “We were stuck in Tennessee for two days.” 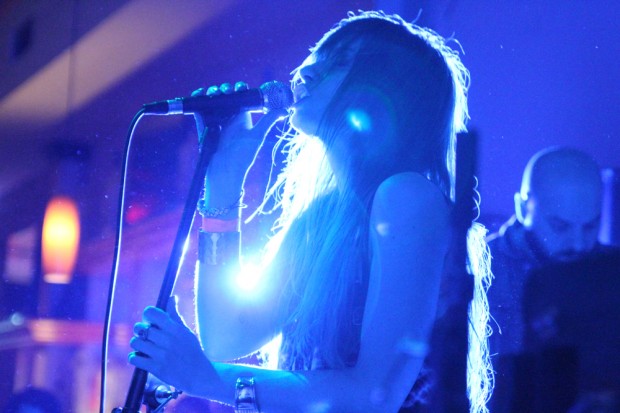 Ruby the Hatchet at LIT Lounge | Photo by John Vettese

Talk about a setback. I ask if they missed any tour shows on the trip down. Scarperia laughs, then says “We didn’t play any. But it was fun, all part of the adventure, right?

The band dished a raucous set of its heady, heavy rock to a modest but appreciative crowd – which included singer-songwriter Nicole Atkins, a longtime friend of Hatchet frontwoman Jillian Taylor. The next day, it rocked Thrasher Mag’s unofficial Deathmatch showcase, and spent the rest of the weekend mingling with the music-devouring masses. Overall, it was a positive experience, and even culminated in Taylor getting a new tattoo (a hatchet, of course).

Ruby the Hatchet was one of dozens of locals that made the trek to Austin this year. Musicians of all styles and degrees of renown represented Philly at SXSW. There were known names like rapper Spank Rock, who played an energized set to a buck wild crowd at the Boyz Noize showcase at The Majestic on Thursday, and alt-bluesman G. Love who played the 18th Floor of the Hilton Garden Inn the same night. There were emerging artists, like folk singer Vikesh Kapoor and punk power trio Amanda X, or SXSW vets like rapper Lushlife, heavy psych heads Creepoid, and dream punks Nothing, who played a 2 a.m. set on a pedestrian footbridge. 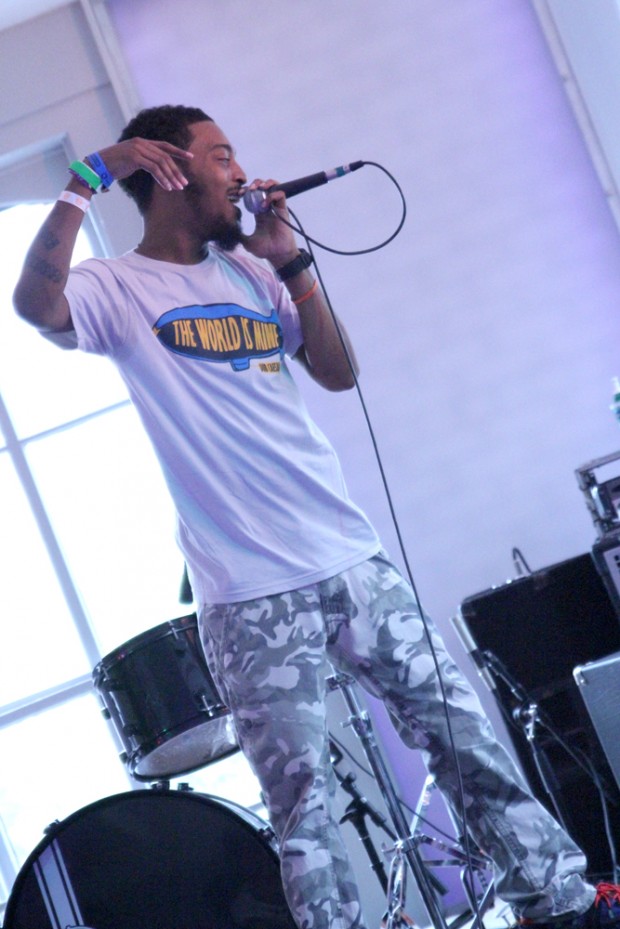 “I feel like SXSW serves as a hub for discovery,” says Philly rapper Chill Moody, who I caught during his showcase at the Amped Austin lounge on Saturday afternoon. “I met a bunch of musicians and professionals in the music industry in just one week. Built some strong connections that will hopefully help me with the next steps in my career.”

For Moody, who is used to feeding off the love of the hometown fan base he’s cultivated over the past few years – he headlines venues like The TLA and Union Transfer locally – it was an opportunity to perform to complete strangers in smaller rooms, and win them over. The Amped show featured his right hand man Beano, a charismatic and occasionally comedic R&B singer, hopping offstage and dancing in the midst of the crowd, to the delight of many Instagram-snappers.

“It was a good chance to show a different audience exactly what you can do,” said Moody.

Downstairs at the same venue, electronic rock duo City Rain debuted songs from their new Songs From a High School Dance LP, due out in late April. Again, the crowd was (with the exception of myself) strangers, but people fed off singer / songwriter Ben Runyuan’s relentless energy, particularly on the driving anthem “Waiting on a Dream.”

“This is our last showcase,” Runyan said. “So I’m just throwing everything I got into this.”

After their set, new listeners approached the band to ask what certain songs were called and where they could find them. Guitarist Scott Crumpstone told me that a similar thing happened at their show the previous day.

“We played at a venue with the front windows open and a couple speakers pointed outside,” he said. “It felt weird, since the room was pretty much empty at first, but people just wandered in off the street and listened.”

City Rain made its first trip to SXSW this year, in a definitely unique fashion. While Crumpstone flew, Runyan took an epic train journey from Philly to Chicago to New Orleans to Austin. “I hate flying,” he said sheepishly by way of explanation.

Also first timers at this year’s SXSW were The Districts, who I caught playing a packed house at Buffalo Billiards. When the set was done and I went to say goodbye to their manager Marley McNamara, she was surrounded by a good half-dozen excited people asking her about what they’d just seen. We simply waved to one another from afar and I continued on my way. 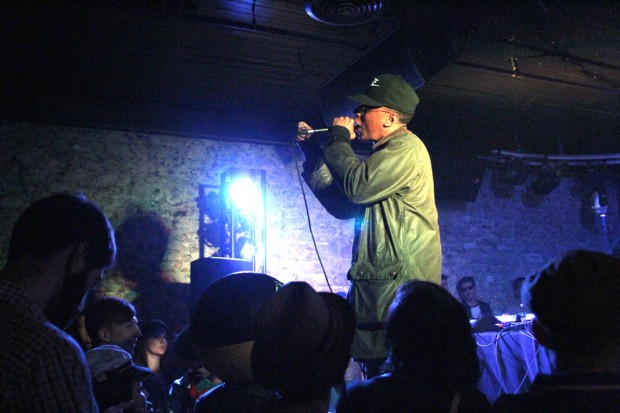 “I enjoyed the chaos of music blasting from everywhere,” he said, adding that the SXSW trip – and subsequent potential for getting in front of influential people in the music industry – was a goal for the band for a long while.

But at the same time, there were uneasy moments, like the day after the Red River car crash that left three people killed and numerous others hospitalized.

“It was super late when it happened, cops were everywhere, and everyone was confused,” Lawrence said. “We found out what happened in a taxi ride home. Then the next morning, we played a BBQ at Rachel Ray’s showcase like nothing happened. It was really strange.”

The accident also put a snuff on Chill Moody’s Homesick Philly showcase, a planned afternoon of all Philly artists at Cheer Up Charlie’s, a venue next door to where the accident occurred. Moody says he chose to cancel the showcase out of respect to the victims, but plans to continue the initiative.

“My thoughts from the beginning were to take it to every festival or big sporting event weekend, just bring Philly everywhere,” he said. “So you can for sure expect to see it again.” 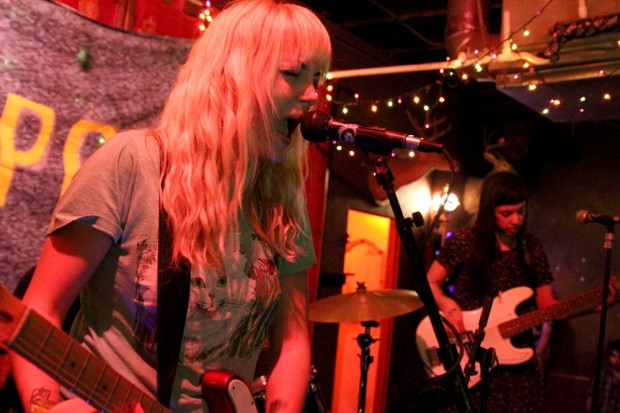 For emerging artists, SXSW can be great, says Cat Park of Amanda X. “Either you get the realization that this is not the life for you, or you’re like ‘this is great, where do I sign up?”

“Of course, the idea that ‘industry people get to see you’ is a plus to some,” Park adds with a hint of cynicism. It’s almost an acknowledging that, with the volume of musicians descending on Austin for the week, the hype about bands breaking out of SXSW may not be all it’s cracked up to be. “However I liked meeting all the different musicians and being able to see and hang out with so many great bands.”

Seeing other artists during downtime was definitely a plus; Park calls it “Black Friday for music,” and mentions that she and her bandmates caught Radioactivity, the new project of Denton punk band The Marked Men, as well as Dum Dum Girls, Wet Nurse and Protomartyr.

Moody said “The best performance I saw was from Allen Stone. I went to meet a friend and he was on stage; I was blown away. That guy is really good.” He also caught Mack Wilds on a Sony rooftop venue, saw Erykah Badu’s pop up performance in the Fader Fort, and even got asked to play an unannounced show with hiphop icon Talib Kweli a day before any of his own scheduled performances were to take place.

Lawrence adds “We saw Timbre Timbre, who are one of our favorite bands, and he barely plays, so that was amazing.” 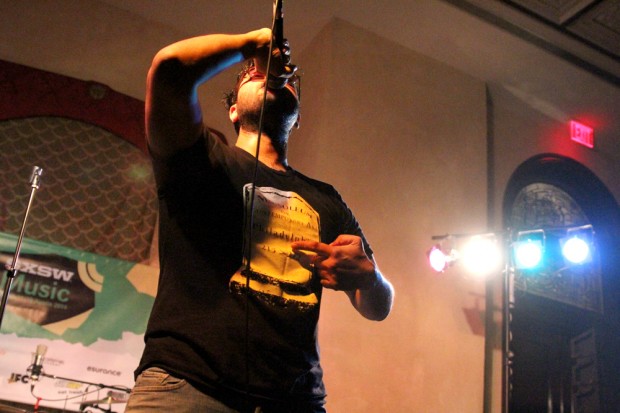 With the festival getting bigger every year, and more of a destination for new and emerging artists, I asked everybody what advice they would give Philly musicians looking to play SXSW next year.

“Try not to play three shows a day,” Lawrence said. “But also make sure you land enough shows to make the trip worth it because it takes a big penny from your piggy bank. And have fun and eat Mexican goodness!”

Moody gave an interesting perspective on the festival at large: with major artists like Badu and Lady Gaga playing in small venues, the celebrity factor draws media attention away from emerging artists – which the festival was founded to spotlight.

“Not complaining because I enjoyed catching Erykah Badu,” he said. “But I do feel like if you started waiting in line at 6pm to catch a 10pm show of a big name act, you missed a lot of gems.”

Park offered a healthy serving of advice to next year’s SXSW first-timers: “Cars are expensive. Flights are expensive. Public Transportation was rather easy. If you do not know anybody in Austin, go to your computer right now and look for a place to stay. Godspeed.”

“Also,” she adds, alluding to the festival’s chaos and unpredictability, “make NO plans.”