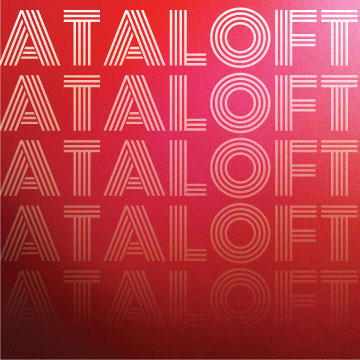 Darren Schlappich might be known as the lead guy in one of the region’s  Americana staples, Frog Holler, but that doesn’t mean Americana is his whole world.

The singer-guitarist has an evident appreciation of expansive pop-rock productions stylists like Brian Wilson, Phil Spector and John Brion, and while those leanings might not always get a chance to shine in his main project, his new band does an admirable job of scratching that itch.

On the debut LP from Ataloft, released on ZoBird Records earlier this month, Schlappich explores tones and takes chances with his music that he might not have in Frog Holler. Banjo player and multi-instrumentalist Mike Lavdanski also made the jump from Holler to Ataloft for the project, and it’s clear that the two have a very distinctive writing style. We hear it in “Bucket of Blood” – the midtempo shuffle and the twangy chord changes – as well as the delicate “A Heart Attack on the Holidays,” a plaintive solo acoustic number. Indeed, these were selections from Schlappich’s songbook that he wrote thinking that they may wind up being Frog Holler tracks, but here they’re dressed up in different tones and textures, aided by third-member and studio guru Bruce Siekmann, who sparked the collaboration.

In this world, “Warning Signs” has a warbly psychedelic intro that phases into dissonance, then into a crisp and bouncing pop song. You begin to hear Lavdanski’s chipper harmonies in the background that come strongly into play on “Old Jones,” and it’s ringing “shoo-wop shoo-wop” commentary. “Go Crazy” introduces more ideas – glockenspiel and sweet 70s rock guitar harmonies. At one point in the first half of the album, I swear it sounds like a tuba is carrying the bass line.

The theme here seems to be taking chances, and that’s also evident in the lyrics. The beautiful lead track “The End Is Nearer Than We Know” could be the mission statement: don’t wait, live for now because we won’t be here forever. When Schlappich sings “you’re my favorite waste of time,” it’s equally plausible that he’s addressing a friend, a significant other, or music itself.

The pressing nature comes up again. On the standout “Worried Mind Blues,” he sings “First you’re born, then you die, in between it’s just a matter of time,” then brings the point around more specifically – possibly drawing from and reflecting on his own experience as a musician: “Giving your whole heart and soul when they tell you you’re not rock and roll / that’s okay ’cause rock is dead.” It’s funny, it’s sad, it’s a very direct point.

On the flanger-fed hoedown of “The Way It Feels,” we get the motivational answer to the frustration of “Worried Mind.” Schlappich sings “And when the sun comes out, casts light on any doubt, it’s clearer the end is nearer. I want to burst into applause, gain momentum for the cause, stay in tune, make a breakthrough.” Again, he’s singing that time is of the essence, so don’t wait to act.

The album does slip slightly in its latter third – not only are lyrical themes revisited (which is fine), but melodic ideas are as well (“Bucket” sounds a little too close to “Worried Mind”). It’s still got a pleasing vibe, but for a few songs the album circles in the worlds of Beck’s Mutations and Wilco’s Being There, but without tracks that jump out as strongly as we heard earlier.

It gets back on track with the moving “Heart Attack,” before “The Parking Meter” brings Ataloft to a lovely finale with a pattering beatbox rhythm and haunting production. The banjo lightly plucks and a lead electric rings out, xylophone adds a rhythmic/melodic counterpoint while acoustics strum, vocals come in from all sides on the refrain and every piece of the album comes together impressively. And as the beat dissolves at the close, you feel that every chance Schlappich, Lavdanski and Siekmann took was worth it.

Ataloft is the featured album in this week’s installment of Unlocked. Download “The End is Nearer Than We Know” in yesterday’s post  and check back later this week for video, an interview and more.