Cinderella Story: Reminiscing with the producers of the infamous "Pat's Dogs" commercial - WXPN 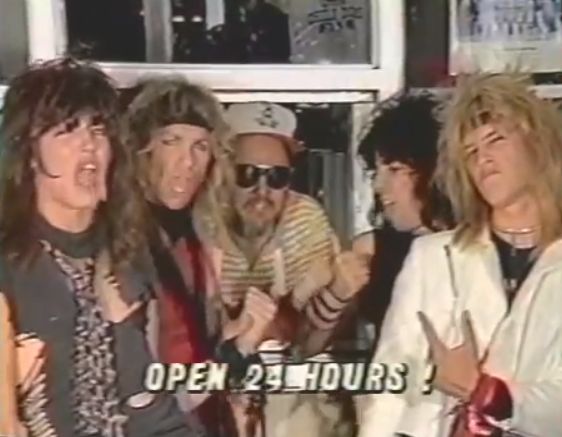 Cinderella Story: Reminiscing with the producers of the infamous “Pat’s Dogs” commercial

It’s been making the rounds for almost three years now: a 30-second commercial for a Delaware County hot dog franchise, featuring an original jingle by local soon-to-be glam metal stars Cinderella (who double as on-screen talent.). The 1983 video resurfaced on YouTube in 2011 and has made the rounds of local and social media ever since. Besides the obvious disjointedness of seeing a fairly famous pop metal band of yesteryear dance around, lipsynching, in front of a local hot dog stand, there’s a sweet nostalgia to the whole operation. Pat’s Dogs is long gone, and so is the kind of unselfconscious hyper-localism this video represents. (The stretch of Southeast Delaware County where the video was filmed, however, is virtually unchanged. So there’s that.)

Not content to merely wonder, The Key tracked down the guys responsible for shooting and editing the video. It turns out that local filmmakers Richard Haynie and Brian Kreider were brought on for the shoot by Cable AdNet, a Philadelphia-based company that sprang up in the early 1980s to produce commercials for cable television, then still in its infancy.

Haynie (now a New Media Specialist for Kaiser Permanente in California) and Kreider (who eventually went on to be Pennsylvania Film Commissioner) were kind enough to reminisce with us about the now infamous Cinderella “Pat’s Dogs” commercial.

The Key: How did you go about devising the staging and performance aspect of the commercial? Did you just let the band and the restaurant staff do their thing, or did you go in with a vision of what you wanted to capture?

Richard Haynie: We received a cassette tape of the jingle produced by Cinderella for Pat’s Chili Dogs just prior to the shoot. Brian, manager of the production department, and DP on this shoot, sat down with me and we gave it a listen It was catchy, 30 seconds, right to the point, with all the important information to serve the client. We had some general ideas of what we could do with it, but played it mostly by ear. We spoke to the owner, and only met the band when we arrived on location the night of the shoot.

TK: Did Cinderella do their own makeup? I’m guessing they did.

RH: As a matter of fact, that is one of the funnier stories from the shoot. The band showed up, we set up our lights and camera, and then we waited. Eventually I went into the bathroom to get them. They were doing their makeup and preening each other’s hair. “Come on,guys, let’s go!” is all I said. They soon emerged, and we got under way. It was a rock moment, these four guys crammed into the men’s room at Pat’s Chili Dogs.

Brian Kreider: I remember threatening to leave if they didn’t come downstairs/outside. Then I believe Rich said they were coming down stairs because they heard the guy with the ABC Recording Studio jacket (me) had enough and was about to leave.

TK: This isn’t really a question, but please just tell me every amazing thing that happened during the entire shoot.

RH: The band arrived, and they were very nice guys. They took our directions well, and we had a lot of fun. There was quite a crowd hanging around, but only a few agreed to be on camera. I still don’t know who the older guy on the left is, but he was willing to get up and dance, so I liked his energy. One of the funnier moments was where we thought it would be cool if each band member bit into a hot dog for some quick cuts. The lead guitarist was a vegetarian, so we removed the dog and he just bit into a bun. You might be able to spot that in the ad.

TK: Did you get more work as a result of the video?

RH: I’m sure CableAdNet got more ad sales because of this ad. It was funny, fun, and featured a local up-and-coming band. What’s not to like? It looks pretty simple by today’s standards, but for the budget, it was pretty good. We shot with a Sharp camera with Saticon tubes, recording to a Sony three quarter inch Umatic VCR. For the gear we had, the images turned out really well, thanks to the lighting sense of Brian Kreider. The audio on location was supplied by a boom box which we recorded for the lip-sync. The titles are rudimentary Chyron, really showing their age. The Dubner titling system was just coming on the scene at this time.

BK: As a demo, it probably landed AdNet some nightclubs business. I know I shot Cahoots at the Airport and Pandora’s in Wilmington. Both were long night shoots. Cinderella was short and sweet once the band was ready.

TK: Did you ever see or speak to anyone from the band again?

BK: We’d see the lead singer working as a courier in Bala. He was always very nice.

RH: We would see him…dropping off and picking up film and prints for the local Kodak photo booths at the local mall. We would always chat a little. This was just before they made the big time on MTV. I always admired how down to earth they were, certainly keeping it real.

TK: When did you first notice a resurgence in the commercial’s popularity? Has anyone approached you about it recently?

Rich: About a year ago, I was just surfing Youtube, and I came across our commercial, posted by someone I didn’t know, with titles added to it, really bad audio and not so good video. I took a slight offense to this, and dug out an old VHS tape I had stashed somewhere. It’s the only copy of the ad I had, but it was way better than the other one I saw posted. I uploaded it, tagged it as “original”, and then notified Brian that it was on the web. Since then, I keep getting thank yous and requests from people for more information or copies of the ad. I don’t support it or make any money from it, I just like the fact that people are enjoying this bit of retro rock.

Joel Tannenbaum is a local community college professor who grew up in Delaware County, listening to bands like Cinderella. Sometimes he writes things at rulesformakingupwords.com. His punk band, Ex Friends, just released their debut album on Paper+Plastick Records. You can buy it here.