By Patricia Madej
April 24, 2014
10:04 AM
Share
Local university and college students play with Fresh Cut Trio at the Painted Bride in February | Courtesy of Emily Rolen

Pete Souders owned Ortlieb’s Jazzhaus for 20 years, but learned in January that the establishment he built a reputation for would no longer be needing his services. His Tuesday Night Jazz Jam Session was canceled.

But, he can’t say he didn’t expect it.

After growing exhausted of the hectic lifestyle of running a night spot and music venue, Souders sold Ortlieb’s in 2007, and after a bouncing around of owners, it was purchased by Four Corners Productions.

“I decided to sell it because I thought I was really getting tired,” Souders said.

Under its newest ownership, Ortlieb’s has shifted gears from its once-smooth atmosphere to a place of socialization, drinks and indie rock. It’s also dropped the “Jazzhaus” portion of its name.

The newest owners asked Souders to come in to host his Jazz Night upon opening, but Souders said he saw major flaws from the get-go.

When he owned Ortlieb’s, Souders said a large, acoustic piano sat center-stage which amplified the room, but once the newest owners came in, they hired a engineer who wired various mics for the jazz performances taking over the piano, which Souders said he thought was “unnecessary.”

Real jazz, Souders said, is able to fill an entire room without the need of any additional equipment.

But then again, Ortlieb’s is now hosting more than jazz performances, necessitating a more involved setup.

He said that the new owners at Ortlieb’s told him they wanted to attract a better bar crowd at midnight, and Souders’ smooth tunes weren’t cutting it. It boiled down to a business issue.

“I had mixed emotions,” Souders said. “…[the situation] was anticlimactic.”

So is the the current state of Ortlieb’s and what happened to its long-standing tradition a reflection for what might happen across the city’s jazz community?

Some say yes, some say no.

Chris’ Jazz Café, on the other hand, is still going strong, but it’s still the only jazz club entirely devoted to the genre in the city.

With over 500 bookings a year, booking manager Alan McMahon said he felt that Ortliebs’ new management was “throwing the jazz community a bone” when they asked Souders to come and host the weekly session.

But the jazz failure at Ortlieb’s is something that McMahon said he believes is routed within a business model and doesn’t have any reflection on whether or not Philadelphia’s jazz scene is dwindling.

“It’s a much healthier jazz [scene] that’s going on, but I think it’s frustrating for a lot of younger musicians because there’s just so many programs that I don’t think venues have caught up,” McMahon said.

McMahon said there are a number of young jazz musicians eager to get their foot in the door.

Temple University has an entire major dedicated to jazz studies with multiple degree programs under the major itself. Students can get a Bachelors of Music in jazz instrumental performance, jazz vocal performance and jazz composition/arranging.

In addition, Temple has workshops, classes and guest musicians that come in to give the students a first-hand perspective about the smooth sounds and licks of a bass accompanying a bossy piano number.

The program hosts an annual jazz festival where 13 high schools come in to play.

Drexel University has something similar going for it, too. The university’s jazz ensemble boosts the success of three groups: jazz orchestra, the jazztet and sextet. The University of Pennsylvania also has a jazz and popular music minor as well as jazz ensembles that students can be a part of.

McMahon said the jazz clubs might be the one to blame. Philly’s got the interest, but the venues are lacking.

“A lot of clubs get comfortable,” he said. “The same old same old has to be consistent with what you’re dealing with while you’re still growing.”

Lenny Seidman has been the World Music and Jazz Curator at the Painted Bride for 28 years. He said what happened to Ortlieb’s is nothing new, and even though there’s a decline in participation from a younger audience, that isn’t indicative of a decline in jazz music in Philly.

“It’s a business thing,” Seidman said. “It is sad to see it ending, but I have seen that happen many times. Philly has a rich history of many, many jazz clubs and it continues to see this.” 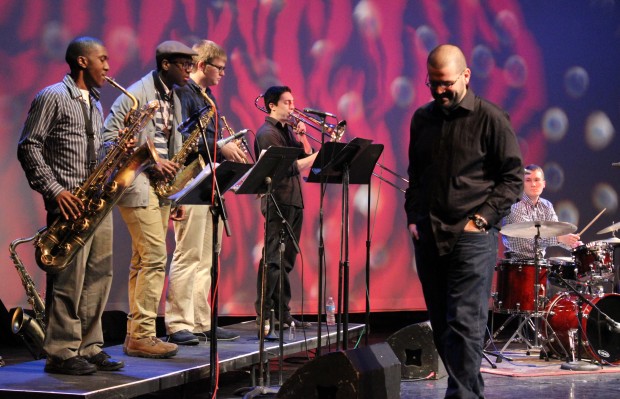 Seidman said that the Painted Bride tries to put together events that help bridge the gap between young and old styles. For example, they’ve got a deal going with 10-piece jazz band Fresh Cut Orchestra (who Seidman says the PB “gave birth to”). The venue has been hosting a monthly Sunday jazz series since last year where guest musicians are invited to come in and well, just play.

Some of those guests include both students from University of the Arts, the Kimmel Center’s Music Program and Temple.

“We tried to think of a way to help [Fresh Cut Orchestra] develop and give them a form to keep developing both compositionally, and in every way, playing together,” Seidman said. “The point is once Kimmel got this thing going, it gave the Fresh Cut guys an opportunity to work with a group of young people and jazz students from the colleges.”

However, Seidman recognized that there’s a decline in younger audience members, but that’s not because jazz is making its exit in the city. Rather, it is broadening its horizons and infiltrating many different musical genres, therefore taking audiences away from the original, or “classic” form.

Basically, Seidman’s suggesting that maybe college kids aren’t sipping on whiskey sours and listening to a tall, cool man improvise on a glistening trumpet, but rather rocking out with a 40 in a crowded basement while they listen to Chet Williams from Roof Doctor blare his saxophone.

Or  maybe they’re refreshing Chelsea Reed and the Fair Weather Five’s Facebook page to check out the next time the band – students at Temple’s Esther Boyer College of Music – is performing its classic, rockabilly sound.

“I think that it’s important for jazz artists to be aware of the cultural tie around the world and adjust, because nothing stays the same,” Seidman said, “[Jazz] is always going to be impacted by cultural shifts.”