Unlocked: The Key's review of Songs for a High School Dance by City Rain - WXPN 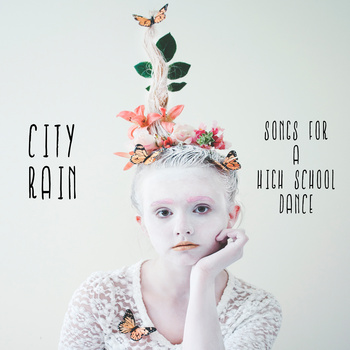 Unlocked: The Key’s review of Songs for a High School Dance by City Rain

The most compelling thing about Philly electropop outfit City Rain used to be its sense of vibe.

On the new Songs for a High School Dance, Runyan has found himself as a songwriter. It’s a collection of cuts that aim for arenas moreso than nightclubs. It sounds dramatic and dynamic and BIG. Most importantly, Runyan has a clear message he’s shooting to convey, a story he’s trying to tell; the experience of coping with troubling human emotional states – bipolar disorder, depression, love loss and friendship loss – and doing so as a young person in post-recession 21st century America, a time that’s particularly unkind to dreamers.

There’s a bit of self-help-ness and motivational-speakerdom about it all, and some moments of the album get a bit too heavy-handed in their heart-on-the-sleeve nature. The single “Join the Human Race,” for instance, sells the catharsis pretty hard. See also “Don’t Choke,” which is actually a particularly moving song about Runyan being uncertain about his creative future following Zerrer’s departure (a breakup that happened at the same time Runyan was ending a romantic relationship) – but the hammering kick drum bombast on the verse almost obliterates this emotional core, not to mention a great vocal contribution from Kate Faust.

City Rain already had a bit of a viral hit on the album with “The Optimist” and it’s cinematic music video; on the song, guitarist Scott Cumpstone cuts epic, Edge-esque guitar accents alongside Runyan’s howling hope for happiness. As a collaborator, Cumpstone’s approach is more nuanced; he compliments Runyan’s electronic arrangements and underscores his lyrical ideas, shapes them into songs with pop appeal. City Rain mark one at times felt like two talented musicians simultaneously soloing; it seemed at times like an adversarial relationship, whereas the partnership on High School Dance feels collaborative.

We hear memorable moments of po-mo referentialism; as much as “Human Race” is a tad overdramatic, there’s a sweet nod to Pixies’ “Where Is My Mind” to grab hold of. “The Dreamer” is based on a synthesizer bed very reminiscent of Pulp’s “Common People.” And while both these songs are massive in energy, High School Dance has standout midtempo numbers – the funky groove on “What’s In Store,” the spacious “Walls” – and moments of stunning sensitivity – the album closer “Mama, I Want to Go Home,” which might be City Rain’s first acoustic ballad.

The band went big on this album, and it deserves to be heard in a big way – it’s appealing, epic but it’s also introspective and inspired. “I didn’t choke, I just got scared,” Runyan sings on “The Dreamer.” “I was hoping that you would believe.” Whether or not the “you” being addressed here followed through on this hope, it’s clear City Rain is a band of believers.

Songs for a High School Dance is the featured album on this week’s edition of Unlocked. Download “Waiting on a Feeling” in yesterday’s post and check back later in the week for a video, an interview and a travelogue.