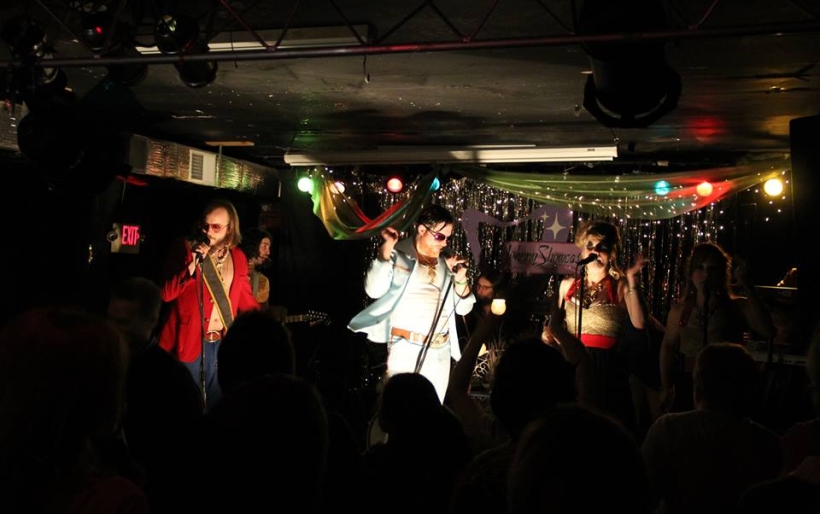 By Patricia Madej
May 02, 2014
11:05 AM
Share
Johnny Showcase | Photo via facebook.com/johnnyshowcase

This summer, Yes!…And Collaborative Arts launches its summer camp season, bringing elementary and high school students together to learn theater skills, expand their imaginations and develop their creativity. But tonight, you can see some of the counselors (and campers) in a bit of a different setting.

“I know a lot of the kids,” said David Sweeny, the brainchild behind Johnny Showcase. “I think it’s a really special thing that kids are being allowed into a club in South Philly.”

Sweeny moved to Philly in 2000 and became involved with Yes!…And Collaborative Arts immediately. Years later, he developed an idea for a band that doubled as a sort of theatrical experience, and with the help of thespians and non-thespians alike, he started Johnny Showcase.

“What we do is definitely an extension of the stuff that [Yes!…And the Collaborative Arts] is teaching in the programs,” Sweeny said. “My thing is that I fool people who are just trying to see a rock ‘n’ roll show to see theater. I also fool people who are there to see a theatrical performance.”

Michael Brix, executive director of Yes!…And the Collaborative Arts, is also one of the founders of the organization and has known Sweeny since he joined. When Brix and other members of the nonprofit decided to organize a benefit concert, he said it was only obvious to ask Sweeny and his band to perform.

From there, he and other members chose the rest of the lineup. However, Johnny Showcase is known best for its racy and colorful performances – something not so suitable for a younger audience. But Sweeny said he “knows his audience” and is prepared to change his usual performance to something a little more family-friendly, though he’s not going “to dumb it down.”

“I guess it’s my mission to bring silliness back to the landscape to modern music,” Sweeny said.

Tonight’s show will start at 8 p.m. and the $15 tickets can be purchased here. All proceeds will go toward what Brix calls “camperships” – scholarships for kids to go to the summer camps.