“Thanks for always having our back, Philly,” Districts frontman Rob Grote mumbles into the mic. Their set has is about halfway finished, and even though the reception hall of the First Unitarian Church isn’t quite sold out, there’s very little free space in the basement – and it shows. Sweat and cheap beer pool on the floor, causing more than a few slips as the Districts rip into the back half of a set powered by churning guitars and heavy-handed riffs. Even though the bluesy four-piece hails from the pastoral Lancaster County, moving to Philadelphia has solidified their status as adopted hometown boys, and the sweltering crowd welcomed them home with open – and sweaty – arms. 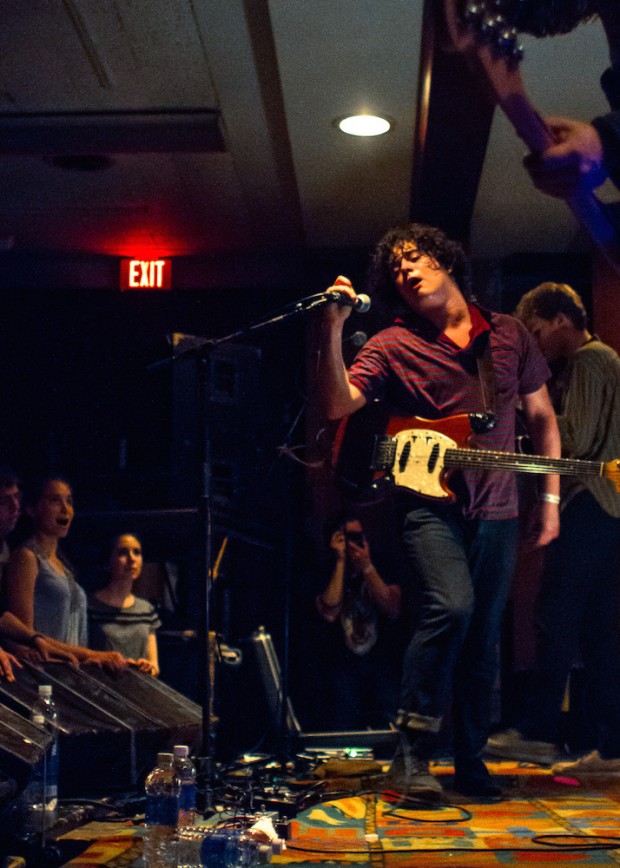 The Districts at First Unitarian Church | Photo by Jeremy Zimmerman

Just back from a short headlining tour of the UK – and before that a longer tour in support of White Denim – the Districts have been having a busy 2014. With Shaky Knees and NonComm recently marked down in the history books, the band is beginning the summer festival circuit. With appearances scheduled for Sasquatch, Lollapalooza, Boston Calling, and of course our own XPoNential Music Festival, the band’s ferocious touring ethic appears to be paying its dividends.

Back in the Church, the boys tear through a tightly knit set marked by explosive energy. The mic and Grote are a pair of magnets; even though the force of his strumming and stomping may take him far, the kinetic power always reels him back in smoothly. The set is short on crowd interaction and banter but long on riffs, and that’s just the way that everyone likes it. Ripping through standout tracks “Lyla” and “Long Distance” from full-length album Telephone, the Districts had no trouble grabbing the assembly of fans by the collar. Interestingly skewed towards the younger demographic, the packed-in crowd made it evident that being a younger-aged band isn’t doing anything but helping to build a fan base which will last.

As the softer tones of “Funeral Beds” slowly built to the epic climax of the show, the crowd went word-for-word with Grote, revealing that there were very few casual, johnny-come-lately fans among them. Loyalty is a key theme of both the Districts songwriting and their relationship with fans – of both hometowns. Taking that trust literally, Grote followed the lead of the more rowdy fans, and briefly crowdsurfed out into midst of the chaos. Philly will always have The Districts’ backs, and always have them back again, whether the next time is a sweaty, crowded basement, or the larger clubs that they’re obviously headed towards.