Tigers Jaw turns the Charmer on at Philly in-store performance

The rumors of Tigers Jaw’s demise were greatly exaggerated. Despite contradicting stories about the fate of the band following the departure of three members in early 2013, the band – now composed of Ben Walsh and Brianna Collins – recently released a snappy new album, Charmer. 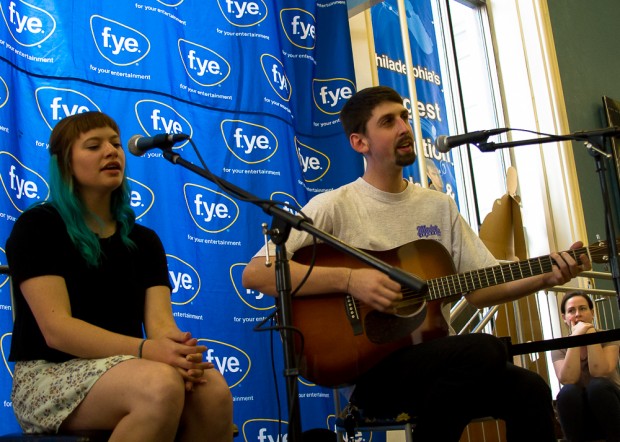 In support of Charmer, the Scranton band played two intimate in-store performances over the weekend; Friday night at Gallery of Sound in Wilkes-Barre, and Saturday afternoon at FYE in Center City. While over 250 people were reported to have come to the Wilkes-Barre event, the FYE set proved to be a bit more of a low-key affair, with closer to 100 people in attendance.

As the crunchy riffs of new favorites like “Hum” naturally translated their way to acoustic versions of themselves, most people chose to sit on the floor and make themselves comfortable as Tigers Jaw worked their way through a Charmer-centric set lasting a little less than an hour. After the performance, fans who had bought the album that day at FYE were ushered upstairs to meet the band and get their merch signed.

Check out a gallery of photos from the instore below, and catch the band this Saturday when they headline Union Transfer; tickets and more information can be found at the XPN Concert Calendar.