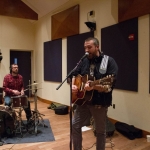 Heyward Howkins might be a fairly new addition to the City of Brotherly Love’s music scene, but front man and songwriter John Howkins is certainly no greenhorn. Howkins gained attention in the early aughts playing lead guitar with The Trouble With Sweeney and he is also a founding member of The Silver Ages, the Philly-centric men’s choral group that puts on notable performances (especially during the holidays). As Heyward Howkins, Howkins and his band have released two impeccable albums – 2012’s The Hale & Hearty and late 2013’s Be Frank, Furness. What continues to draw us here at Folkadelphia back to Howkins’ music is his immense storytelling powers, wrought with detail, witty wordplay, clever turns of phrase, and, the best in my opinion, references that give a wink and a nudge to Philly. Plus, we like the “Be Frank” part, as we formerly ran a record label of the same name.

What can we say about Heyward Howkins that WXPN & The Key’s John Vettese has not already written in his excellent review of Be Frank, Furness? Vettese wrote that The Hale and Hearty caught our ear “with both evocative word choices and clever imagery laid gracefully atop breeze acoustic-rooted instrumentation” and that “Howkins is a musician who likes to give his listeners a thing or two to chew on.” On this latest album, the music end of things is fleshed out, nearly as expansive as the lyrical content. As for me, I often seem to get the line from the title track stuck in my mind, “Even cut brandy is carefully fortified, but our actions still mortifying. And the orange line nags with champa and a twist cap wine, but above we’re all mortified.” That’s how this record works on you; pictures become ingrained in the imagination.

It was fresh off the release of Be Frank, Furness that we welcomed Howkins and his band – Josh Newman (bass), Vince Tampio (melodica, trumpet, vocals), and Erik Schmidt (drums) into the WXPN Performance Studio to track song for the latest album and more.