With a name that evokes classic notions of taste style, you might initially think of The Gallerist as something pretentious or esoteric – art school dropouts more concerned with presentation and aesthetics than the actual music. Well, you might think these things if you’re particularly judgmental about band names.

Nothing about this trio of Philadelphia musicians actually reeks of ostentatiousness, though. In fact, on this somewhat quiet Tuesday evening at Ortlieb’s in Northern Liberties, they’re the only people in the bar still talking about the heart-wrenching removal of the US Men’s National Team from this year’s World Cup. Talking about it with a distanced reverence for the team’s accomplishments (particularly goalkeeper Tim Howard, whose considerable talents are now meme boilerplate), the conversation goes towards local sports very quickly. These are men who would sit comfortably in a number of crowds, and their music – a spirited take on familiar Americana and folk tropes – does much of the same.

Maybe you saw them open for some other local artist like Ron Gallo at a place like Tin Angel or Fergie’s, playing one-off gigs with just frontman/guitarist Mike Collins. Or perhaps you were lucky enough to see them open for the quickly-ascendant English singer-songwriter Laura Marling at the historic Prince Music Theater last year. Either way, their driving hooks, deft harmonies, and impassioned lyrics stayed with you well after the performance. On their new self-released EP Twine, which is officially released on Tuesday, July 15th, (and which initially gets offered to the public tomorrow at an album release show at the Bourbon & Branch), the band presents their clearest manifesto yet: five songs, each more instantaneously catchy than the last. The Key’s Skye Leppo wasn’t kidding when she said that The Gallerist “may just be one of the Philadelphia folk scene’s best kept secrets”, and we suspect that they won’t stay in the shadows much longer.

But right now, Collins and his bandmates – bassist Kai Carter and drummer John Holback – are understandably shrouded in some misconceptions about who they are. This is probably thanks to their name, which has made some people think they’re a one-person act. To be fair, the band name is in the singular, which dates back to the project’s origins as Collins’s solo vehicle in 2011. He still plays some solo acoustic shows, like last night’s at the Tin Angel, as The Gallerist.

“If you think about somebody who owns a gallery or frequents galleries…they really like bringing things together into one place. I liked the concept of someone collecting different things…experiencing different things, collecting experiences,” he explains. The 29-year-old New Jersey native started performing as The Gallerist while living in Boston, where he released the gorgeous A Falling Waltz EP in 2011 as well. When he moved to Philadelphia later that same year for graduate school, he chose to keep the name while looking for other members. Holback came to Collins’s attention via a Craigslist search for a drummer and bassist, while Carter came to their collective attention via his own Craigslist ad nearly a year later. Collins and the 31-year-old Carter played a few shows together as a duo while Holback, 26, was serving as an AmeriCorps volunteer in the Midwest; when he returned, they began playing as a trio and building a slow buzz for their evocative songs and tight musicianship.

The happenstance way in which these three musicians came together is fairly indicative of how a lot of local bands start, but few sustain their chemistry for this long a period of time; one gets the sense, when spending time with them, that their chemistry is completely natural and consolidated over a dedication to craft. This carries over into how they create music, and the collaborative dynamic is important to all of them.

“I’m not making all the decisions in this group. There are sounding boards, and we all discuss what’s going on collectively,” says Collins.

“The Gallerist was a huge transition for me,” adds Carter. “I moved out to Philly and left my previous gig playing for a solo artist, where I got told what to do. I got really burned out on being in some guy’s band and being a hired gun. To be a member of a band, writing harmonies and arranging with Mike. To have more creativity was good for me.”

Their easygoing report, peppered with knowing slights and digs, underlies the ease with which they communicate their artistic message as well. 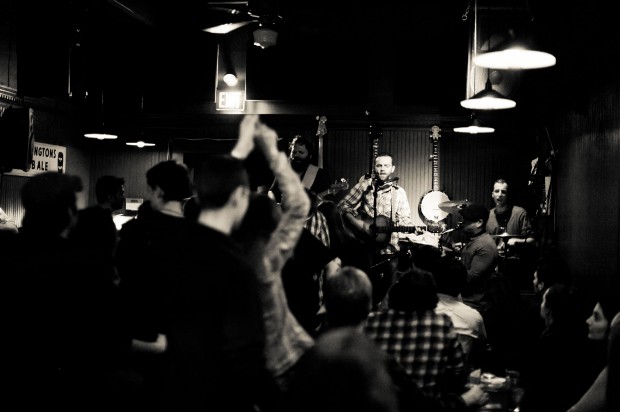 Photo courtesy of the band.

And what of this message? What separates The Gallerist from the myriad others in the robust Philadelphia folk and Americana scenes? For one, there’s the quality of their craftsmanship. Collins, who has been writing songs since childhood, and his powerhouse tenor are the most immediately gripping parts of their music. He nimbly moves between quivering coos and ecstatic belts, reminiscent of Glen Hansard in range and agility. His understated guitar and banjo lines intertwine with Carter’s wandering bass licks while the two’s voices harmonize in shimmering beauty; although Collins may sing lead, the two propel each other’s talents to the point where they’re inseparable from the whole.

Collins’s lyrics pursue allegory while avoiding obtuse crypticness. The result is something cathartically universal, made for sing-a-longs in venues of any size. Any audience, taking cues from The Gallerist’s palpable sense of conviction, can find something to grab on to in any of their songs. On “Blame”, Twine’s closing track and arguably the album’s strongest song, Collins and Carter cry “If you never wanted to stay, I can’t say that I would blame ya/there’s comfort and warmth in the same, but seeing the world will change ya” in choruses that grow in cathartic intensity; although the lyrics are transported from Collins’ very personal experiences and emotions, the moods which they convey are universally understood.

“The people who I think are the best lyricists are slightly cryptic. Some of our songs are best left to interpretation, since I’ll revisit songs later on and they’ll mean very different things to me,” says Collins about his lyrics and their reception.

Holback, who studied drums at the famed Berklee College in Boston, sublimates his virtuosity in restrained and metronomic drum lines that ground the music while also giving it compelling momentum.

“My role is a lot simpler. I just like to find some place where I can have fun, and if I can even laugh when the gigs are bad, then that’s enough,” says Holback about his role in the band. “I’ve played in a lot of bands, and this is [the dynamic] I like. I’m not saying I don’t put hard work into it, I just don’t want it to feel too much like a negative.”

World premiere of “Helium” from the Gallerist’s new album, Twine. from The Gallerist on Vimeo.

The band brings this chemistry to its closest combustion yet on Twine, whose electric sound is a marked departure from the largely-acoustic A Falling Waltz. They admit that this has arisen from years of performing these songs live and knowing what works best in certain venues.

“We’ve been playing bars for two years. People are there to be social, so you really have to bring some energy. That has transitioned into Mike’s delivery, and John and I upped the energy in order to harness the crowd’s energy too.” says Carter.

To record the album, the band set up a mini-studio in a barn in Gettysburg that previously served as a field hospital for the Confederacy during the Civil War. The record, begun in September of last year, carries a sort of rustic autumn energy derived from these sessions.

“We played there all night, and it creates an environment that’s great for working on tunes and putting us in a good space to do it,” says Collins about the experience.

After recording a lot of the instrumental tracks there, the band finished the album a few months later in a local studio with help from Josh Friedman and Brian Strouse of The Lawsuits, who they met in the period between recording sessions. Most of the album’s songs, like “Helium” (whose video is embedded above), share a lot with The Lawsuits’ brand of evocative and catchy harmony-driven folk-rock. Still, this statement is something altogether unique.

Compounding this uniqueness is the way in which the album is being released. Opting to avoid the awkwardness of selling vinyl or CDs to digitally-minded audiences, the band is selling 6’’x9’’ prints of what would otherwise be an album cover with a download code and track list on the back. The artwork was done by Rob Helmsetter, who also directed the “Helium” video.

“People want the MP3s anyway, so that’s really the end product. Why don’t we just give them that, as well as something tangible that they can hold in their hand to accompany the music?” explains Collins about the band’s logic.

What’s truly amazing about The Gallerist is just how they mix an undying love for their art with a pragmatism about its delivery that too many musicians avoid. If their star continues to rise in the way that they – and we – hope, then the chances are high that you’ll be seeing a lot more from them soon.

The Gallerist releases TWINE tomorrow at the Bourbon & Branch in Northern Liberties. Levee Drivers and The Bernhardt Family Band open. Doors open at 8 PM. Click here for tickets and information about the show.