Interview: Camera Obscura on family, emotional memory, and how the Glasgow scene has supported and shaped them - WXPN

Interview: Camera Obscura on family, emotional memory, and how the Glasgow scene has supported and shaped them
Artists

Interview: Camera Obscura on family, emotional memory, and how the Glasgow scene has supported and shaped them

For nearly 20 years now, Scottish rockers Camera Obscura have delighted and enchanted fans with breezy, candy-coated gems that come alive thanks to front woman Tracyanne Campbell’s gorgeous, gauzy vocals, and an undercurrent of unease. The band first made a splash in 2001, with the Stuart Murdoch-produced, John Peel-acclaimed Biggest Bluest Hi Fi—then continued to churn out albums, while at the same time refining their orchestral, summer pop.

2013 saw the release of their fifth LP, Desire Lines, as well as the birth of Campbell’s first child, Gene. Now one year later, they’re headed to the States in support of Desire Lines, and will stop by World Café Live on July 19. In advance of their show, we rung up long-time keyboard player and vocalist Carey Lander—to talk family, emotional memory, and how the Glasgow scene has supported and shaped them.

The Key: I hear that Tracyanne is bringing along baby Gene on tour. What has that been like?

Carey Lander: Well, we’re partially finding out still. We did a weekend in the UK with him, and that went fine, which is reassuring. The baby will be on the bus for the tour though, so that will be interesting. But hopefully it will be ok.

TK: Are you worried you won’t be able to have as much fun with a baby on board? Do you like to go out and party a lot when you’re on tour?

CL: Not really. We are actually very boring. Our ideal night is to stay in, get room service, and watch TV—basically to be as boring as possible. We’re not too wild. 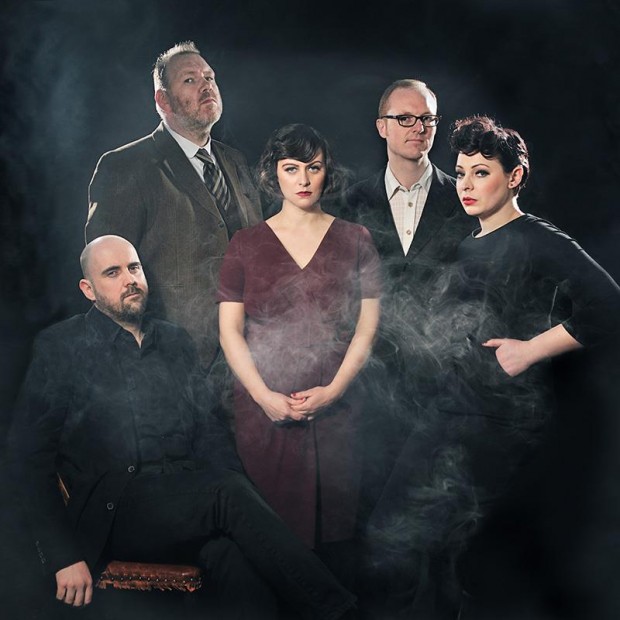 TK: That actually sounds pretty nice! So to me, one of most striking things about Camera Obscura is that you guys write these beautiful pop songs, but with an undercurrent of sadness. The juxtaposition is part of what makes them so great. Is this deliberate?

CL: The misery is in our songs is always hidden because I think we’re a little bit embarrassed to reveal our pain too much. So we try and make something that sounds lovely no matter what is behind the songs. Today we were talking about what a miserable album [2009’s] My Maudlin Career is. You might not realize it if you’re just casually listening, but there’s a lot of pain in those lyrics. It’s not all downhill though.

TK: I studied acting in college and a big part of the Stanislavsky method is emotional memory, and calling up past emotions in the present moment as part of acting. I imagine to some extent, performing these sort of emotionally-charged songs might be similar. Do you find performing to be an emotional activity? If so, how do you mentally prepare?

CL: This is probably more a question for Tracyanne, since she is our main songwriter—but I think I can relate somewhat too, and I imagine Tracyanne would say you can’t really afford to tap into those emotions like that again and again. You can’t be doing that every night; you have to learn to distance yourself, and let the songs become something else. You can’t make it personal every time. And that doesn’t mean you’re not committing to the performance, or you didn’t feel something when you wrote them—it’s just that you psychically can’t drain yourself like that every night. You have to make it a song you perform for other people to enjoy.

TK: That sounds like a good philosophy. So Camera Obscura have been a band for more than 15 years now, which is an insane amount of time. If you were to start a brand new band tomorrow, what kind of band do you think you would form? Could you ever see yourself in like, a punk band, or an R&B band?

CL: It depends. I think Tracyanne and I would end up doing something pretty similar to what we’re doing now. Lee [Thomson, drums] would probably be in a punk band; he played in some punk bands before. Gavin [Dunbar, bass] really likes New Order, so he would probably be in a new wave band or something like that. And I could never say for Kenny [McGeeve, guitar]; he’s the wild card. It’s weird to think about forming a new band though. It takes such a long time to come up with a way of expressing yourself that works, and developing your style. I don’t know if I’m capable of something completely different or not.

TK: So tell me about the music video for “Troublemaker.” This song is such a great summer anthem and the video, with its futuristic vibes and teleportation tropes, is so fun.  Tell me about the inspiration.

CL: Gav, our bass player, came up with the idea. He’s really into 70’s sci-fi and Dr. Who and all that old-fashioned stuff, and he went to Blair [Young, director] who makes our videos and they made it happen. It’s supposed to look low-budget and it is really is! But I think it works well with the TV series we like.

TK: I read that Stuart Murdoch was in the video, and I had to watch it like four times to notice him. But I finally spotted him! I’m a huge fan of both Camera Obscura AND Belle & Sebastian, so to me this is basically the coolest thing ever. Are you friendly with Belle & Sebastian?

CL: We are. We bump into them all the time; we have lots of various connections. We live near some of them. They’re a nice bunch.

TK: You guys both formed around the same time, and became known for this sorta breezy, emotional pop. Do you think there’s something about Scottish culture in particular that spurs this?

CL: It’s always hard to explain the Glasgow scene—there’s this history of brilliant bands that come from the city, and people here always help each other out and support each other, so there’s a sort of scene in that way. Here in Scotland there’s a thing we say that the weather here is so terrible that people just stay indoors all the time and that leads to making music [laughs]. I’m not sure that’s entirely true, but there is definitely truth to the idea of where you live affecting your process. When the sun comes out here people get so excited and go outside and it gives you a little glimpse of what life might be like if you lived in say, Spain, where it’s sunny all the time. But you live here where it’s cloudy and rainy, and that not necessarily a bad thing. 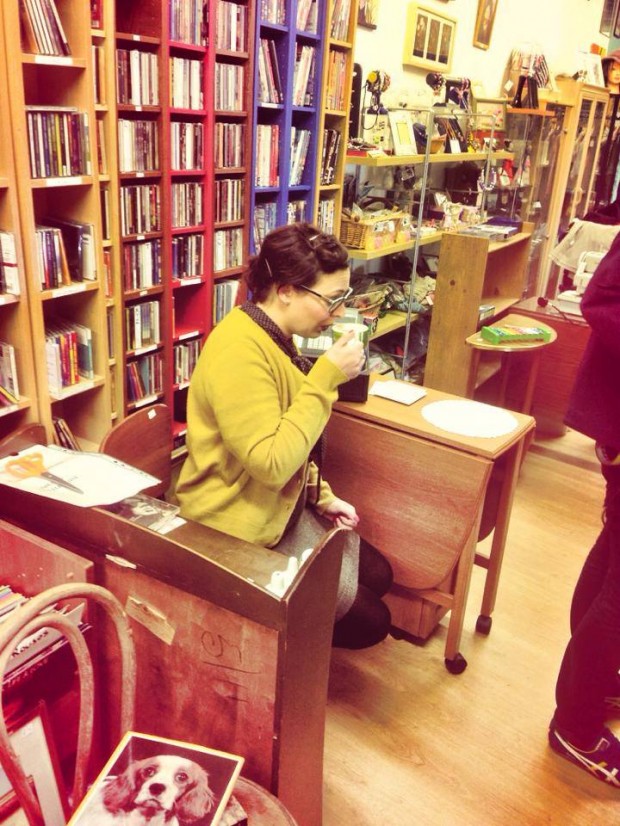 TK: What do you like to do for fun when you’re not writing or touring?

CL: Unfortunately most of us are working other jobs—and most of the band are parents of small children so they probably don’t have many hobbies. I read a lot and sit in the park when it’s not raining; I occasionally go to concerts, but nothing very exciting.

TK: I’ve heard that having a baby changes your world view. Do you think this is true for the band as a whole? How have you evolved over the years as you’ve all grown up individually?

CL: Maybe we’re mellowing out? But I think there’s still an element of struggle for us as a band, especially now trying to make the band work with people’s families. It’s hard to deal with. We’ve been doing this for so long and we really want to keep doing it, but things get in the way—and as a band, you still have to find enough money to tour, and if you don’t get enough money you wonder why you’re doing it—especially if you have to be away from family and friends. So I think while personally a lot of us are happier, in that we have families and such now, the music biz in general can be hard, so there’s always a dark side.

TK: So Camera Obscura played Philadelphia last summer, opening for She & Him. Did you get a chance to explore the city at all? What were your impressions?

CL: The last time we stopped by on the She & Him tour, we didn’t have too much time to explore. But when we played Philadelphia in 2009, we spent a day in the city—we went shopping at the vintage shops, and obviously we had cheese steaks because that’s the law [laughs]. Some of the boys took a taxi and brought them back to the venue for us.

TK: And what did you think?

CL: I couldn’t eat it every day but as a novelty it was fun. I should add that we’re genuinely happy to be in the States every time. It’s always a great experience.

TK: We’re happy to have you! So what’s coming up next for Camera Obscura?

CL: Honestly, I don’t know. This is the last thing we have in the books—there’s a big question mark after this. I’m sure we’d love to make a new record—but it’s not on the horizon quite yet. I don’t think Tracyanne has had time to write any new material with the baby and all. But we’re not ready to give up just yet. We just need to sit down and figure out what’s next.

TK: We can’t wait to hear about it.

Camera Obscura play World Café Live on Saturday, July 19. The all-ages show starts at 8 PM and tickets are $20; more information can be found via the venue’s website.