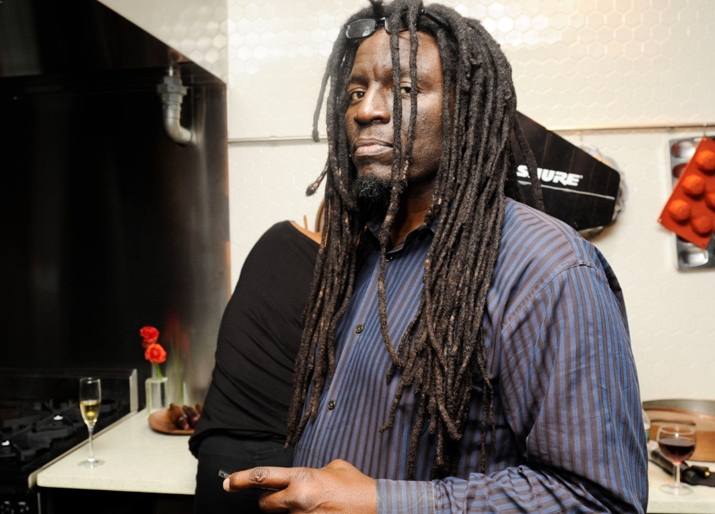 The Roots released this official statement:

“The Roots Family are devastated to announce the passing of Richard Nichols, the band’s longtime manager, after a long battle with leukemia. Nichols, 55, a Philadelphia native, managed the band from its inception in 1992, and was instrumental in every aspect of The Roots’ creative, cultural, and professional life  over the past two decades. Nichols is survived by his wife, Mercedes Martinez, his sons Amiri Nichols and Rakim Nichols, his sisters Rochelle Nichols-Solomon, Rebecca Dennis, his brothers Russell Nichols and Reginald Nichols, and the many individuals and artists he mentored in his lifetime.”

In Chapter Two of Questlove’s Mo’ Meta Blues, there’s an e-mail exchange between Quest’s co-writer, Ben Greenman, and the editor of the book, Ben Greenberg. In the e-mail, Greenman outlines the potential way in which Nichols can have an ongoing voice throughout the book. Greenman describes Rich:

Rich is supremely analytical, extremely verbal, and entirely determined to digest, process, present, and represent the Roots’ whole experience. He has been central to the growth of the enterprise – in helping to strategize the moments when they grabbed for the brass ring as well as the moments when they sat back and thought about what the brass ring meant. He conducts an ongoing interrogation about what it all means. What’s black culture? What’s hip-hop? What are the responsibilities of a society and the people in it? And his inquiry isn’t bloodlessly academic, either; there’s something very consequential about his approach.

I’ve had the privilege of a handful of dealings with Rich over the years, in the context of the music business and the various events and interviews WXPN has done with the band. When I read the above paragraph in Quest’s book, which came out about a year ago, I felt that Greenman expressed how I always felt about Rich, in the little that I did deal with him. What I noticed right up front when I did meet Rich for the very first time – I think it was at a Roots house party in Grays Ferry back in the early 90’s, I always admired Nichols’ thoughtfulness, as well as his incredible love of music. Perhaps it was the “consequential-ness” of his approach that I felt, but couldn’t articulate.

In addition to his work visionary work with The Roots, Nichols also held down production, mixing and Executive Producing duties for a number of records, including those by Al Green, Common, Jill Scott, Zap Mama, Jay Z, Elvis Costello, and others.

In his acknowledgments to Mo’ Meta Blues, Questlove offers a thank you to Richard Nichols: “For being in the lighthouse. Actually, I think you are the lighthouse.”

Our thoughts go out to Nichols, family, friends, and the entire Roots crew.