Summertime Sips and Summertime Sounds is our occasional, seasonal foray into summer vibes with our fave “summertime” bands, in which we meet up, share a drink, and revel in the sunny weather (check out the first edition, featuring Work Drugs, here). Today we hold shop with Philly’s Cruiser; read on to experience the adventure.

When it comes to soundtracking summer in Philadelphia, there are few bands as likely to land on an open-road playlist as Cruiser, a four-piece formed around singer-songwriter Andy States, who first started composing songs in his bedroom in 2012, then gathered a full band soon after. Since then, the group—made up of States, drummer Jon Van Dine, bassist Kyle Cook, and guitarist Bruno Catrambone (who also leads introverted folk outfit Former Belle)—have become a force to be reckoned with, crafting breezy, radio-friendly gems that have attracted the attention of fans in Philadelphia and beyond. Now fresh off a set at Firefly Music Festival, the band is hard at work on their new EP, due out this fall, but still took time off to meet with me and drink some beers.

We meet up on a Monday night at States’ and Van Dine’s apartment in Kensington, complete with an awesome roof-deck, a grill, and Van Dine’s absurdly adorable Jack Russell-Chihuahua mix, Gene. Over the course of our interview, we grill burgers (Van Dine smothers his with an ungodly amount of ketchup and mustard), knock back some Hell or High Watermelons, and lust over the neighbor’s pool, which we have a great view of from above.

The band tells me said neighbors aren’t too fond of them because they lit off too many fireworks during the 4th of July; later that night, they light off a whole bunch more for my benefit, even though it isn’t quite dark yet. Everyone takes pictures of the experience, and we all almost die when one firework goes awry and shoots back towards us.

Luckily, we all survive, and in between shenanigans manage an interview. Read on to learn about blue holes, gin drinks, and whether they’d prefer to ride the Weezer or 311 cruise. 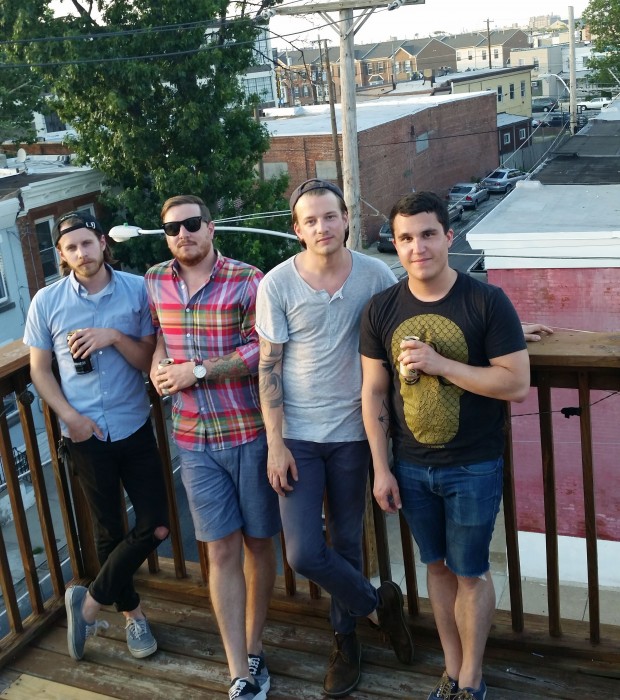 The Key: So it’s about 92 degrees right now, but I notice you guys are all wearing tie shoes. What’s up with that? Are you anti-flip-flop?

Jon Van Dine: He is, but I don’t mind them! I’ll wear them if it suits the situation, like if I’m at the beach. I won’t go to the grocery store in flip-flops though—that’s weird.

KC: Andy wears shoes like, all of the time.

Andy States: It’s true! I either like to go barefoot, or I wear boots.

TK: Barefoot in the city? That seems unsanitary.

JVD: Kyle and I are long-term Vans wearers. Vans with laces. It’s what we do.

The Key: I confess I’m glad I wore moccasins today—I wouldn’t want to be the only one exposing toes. Ok. So Cruiser has a distinctly summery sound. Some of you guys have backgrounds in advertising and design, so I’m guessing you know a thing or two about brand creation. Did you purposely set out to create a summery brand?

AS: It actually just sort of happened. I had written all kinds of music before when I started writing some more beach-y stuff, and it just clicked. I’ve always preferred upbeat music—unlike Bruno, who gets sad in the summer [Bruno sheepishly nods]. Stuff like The Drums, and Beach Fossils, and The Beach Boys were big influences—I love stuff that has that nostalgic feeling. It reminds me of Christmas music, or old stuff from the 50’s.

TK: What specifically feels nostalgic? Do you have particular childhood memories that make you drawn to the summer?

AS: As I kid, I think we all loved summer just because you got out of school. I have lots of fond memories of going to the pool—I grew up in Fleetwood, PA, which is a small town in Central Pennsylvania, and we always had a pool membership.

JVD [nodding]: Summers were the best. I was a big camp kid—I did swim camps, and summer camps, and boy scout camps. I also have great memories of hanging out, going to neighborhood barbecues, riding bikes…

Bruno Catrambone [interjecting]: I was always sad in the summer. [Everyone laughs]

KC: Summer music just has a good feel. We wanted to make music that can be listened to while grilling and drinking [laughs]. Growing up there were so many quintessential summer bands that I loved, that I come back to still. Like Saves the Day…

AS: —Just ‘90s radio in general. Like mid ’90s radio. We were maybe too young to really understand it, but I think we all absorbed it, and it influences us now. 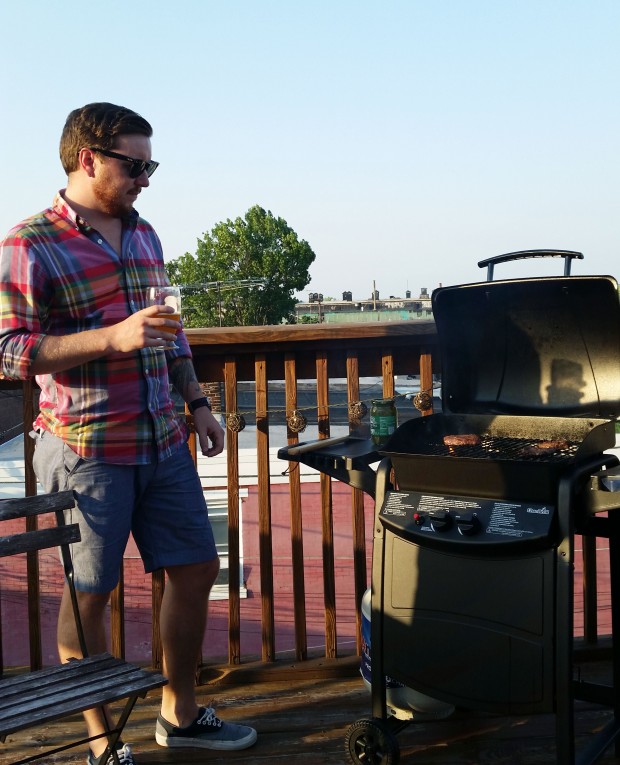 TK: Nice. So when I interviewed Carey Lander from Camera Obscura the other day, she talked about how the weather in Scotland affects their sound. How are you affected by the weather in Philadelphia?

AS: I wish I had a better answer for you here—actually I think my answer to this question is almost an anti-Philly answer! The themes in our music are more about escaping the city, and getting away from it all. When I started writing, I wasn’t living in Philly yet—I was still living in Fleetwood. We love being in Philly now though; we’re very happy that we’re here. It’s such a great, underrated city, and it’s very conducive to making art.

TK: I feel the same way! So what’s your favorite thing to do in the summer in Philly?

AS: We’ve had a great time these past few weeks just discovering new places to swim around Philadelphia. Like I hear there’s a secret pool in South Philly… [Kate’s note: It’s true! And awesome]

JVD: We’ve also been going to an airplane-shaped pool in New Jersey, where you can pay $10, and there are live bands playing in the gazebo…

AS [agreeing]: I like being able to drink in the pool, so this place is key. We’re also really into blue holes, which are these giant holes in the ground that are just filled with this super blue water…

KC: Most of them were quarries back in the day. They’re off-limits now, and you have to be in the know to find them. But there are some maybe 20 minutes outside the city, so we’ll just hop on the highway and leave for a few hours. You have to be super careful though because sometimes the park people will patrol them…

JVD: It’s true. You definitely need to be careful. But they’re really great, and it’s just really fun to escape the city for a little while.

AS: And of course, our fave thing to do within the city is probably to hang out on this deck…

JVD: Now that we have a grill up here, we’ll be up here all the time.

AS: I encourage everyone to find a roof and a grill. [Everyone nods].

TK: Nothing beats a burger and a brew on a hot day. So what are your favorite summertime drinks?

KC: I like to make manhattans and old-fashioneds, but in the summer, I’m more of a gin and tonic guy. Gin and tonic travels really well while tubing, or doing summertime activities.

TK: Hard liquor while on the water? That sounds crazy!

AS: I think that Bud Light Lime is highly underrated. But my favorite drink is an Aviation, which is gin, lemon juice, and this maraschino liqueur called Luxardo. It’s so refreshing!

BC: I’m into making Guinness floats with ice cream. I had a friend over the other week, and we drank them all afternoon. 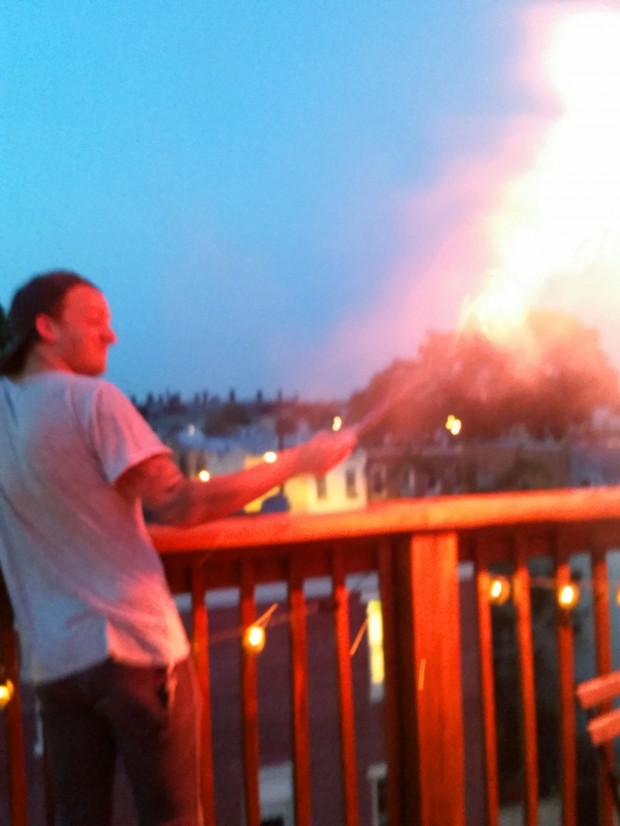 TK: Is there a particular kind of ice cream you prefer for your floats?

BC: I’m partial to the Wawa-brand vanilla [laughs].

JVD: I love margaritas. For my work, we go Six Flags once a summer, and we will drink margaritas in the parking lot for about an hour first, and then go ride Kingda Ka. No one has thrown up yet…

[General discussion breaks out about Jersey amusement parks; Bruno shares a story about how he once got kicked off Thunderhawk at Dorney Park for taking a selfie at the top of the ramp]

AS: I worked at an outlet grocery store called Amelia’s in Fleetwood, that was always filled with the weirdest people. I also worked at a MacDonald’s and on my first day, they made me clean the urinals.

KC: I worked in the HVAC business, where I would install AC units for chain restaurants like Red Lobster. I’d spend my summers on the roof where it was very hot and I would just get disgustingly hot and sticky. The one perk included free cheddar biscuits [he laughs].

BC: I worked at Friendly’s when I was 16. I made $6.25 an hour and would do things like clean up cigarette butts in the parking lot and empty the big tub of grease we kept in the kitchen.

JVD: I worked at River Country, which is a tubing park in Bucks County…

KC [interrupting]: You worked there? That is where I would go drink gin!

JVD: It sounds fun but it was really an awful job. I would fetch and return canoes for people, so it was a lot of heavy lifting, and lots of spiders. I made $6 an hour and my boss was always on shrooms. I would patch up the holes in the rafts—it was miserable.

TK: Sounds like it! Ok, now time for some either-ors. Jimmy Buffett or Bob Marley?

KC: It’s absolutely Bob, but I have a soft spot for Jimmy Buffett. My parents listened to him constantly, and not in a douchey way. So I never had negative vibes against him. Dude is rich as shit.

TK: Mine too! I remember growing up loving “Cheeseburger in Paradise.” Next question: “Sitting on the Dock of the Bay” or “Summertime, and the Living is Easy”?

All four: “Sitting on the Dock of the Bay.” That song rules.

AS: The river, for sure. We love Creedence (all agree). 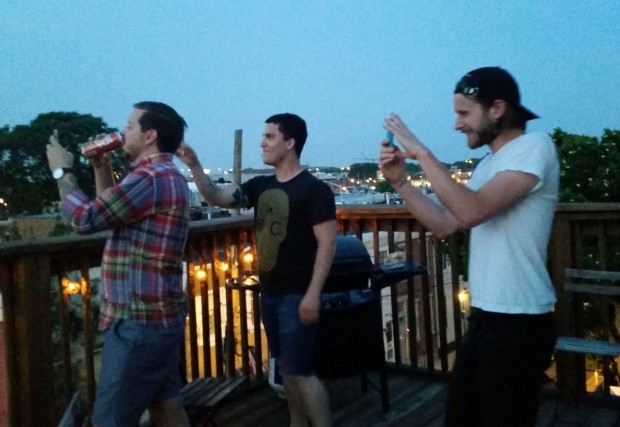 TK: And just because you guys are Cruiser—Weezer cruise, or 311 cruise?

TK: I’d go Weezer myself. So you guys have an EP coming up at the end of the summer. Is the timing deliberate?

AS: Exactly. We’re hoping to extend the summer into the fall.

TK: Now there’s an idea I can get behind!

Cruiser play Johnny Brenda’s on Friday, July 18. The 21+ show starts at 9:15 PM and tickets are $10–12; more information can be found via the venue’s website. Their new EP will be available late September.