In some ways, the ladies of Amanda X are the biggest punks we know. When they first came together, they were still new at their instruments (guitarist/vocalist Cat Park had previously played bass and sang in Band Name; and bassist Kat Bean and drummer Tiff Yoon had only played guitar). Yet they formed an easy bond despite this, and within 2 months of coming together, recorded their first EP—much like the Ramones or the Sex Pistols before them.

Yet taken from another perspective, they’re also one of the most responsible bands we know. “We’re always writing songs to our full potential at the moment,” continues Park. “We are very specific about how we practice. We practice our songs until they sound good. We don’t jam.”

While not touring, they all hold down real, responsible jobs—Park and Yoon work for local nonprofit The Rock School for Dance Education (Yoon is Director of Design & Marketing); Bean works for a popular Philly restaurant. On the last tour, Yoon worked from the road—“we’d play a show, and then I’d wake up early and find a coffee shop with internet and log some hours,” she explains.

When I ask them if they’d leave their jobs behind to tour full-time; they’re hesitant—all are aware of the difficulties of making money on tour, and are reluctant to leave steady income and family. Mostly, though they’re not ones to indulge pipe dreams—“we’re all in our late 20’s, so we’re more realistic,” says Park. “We try to think just one step ahead.”

Still, that’s not to say the ladies don’t have the wherewithal to make it big—indeed they do. Since forming 2 years ago, Amanda X has garnered attention from national and regional blogs like Noisey, Gothamist, and Brooklyn Vegan; they’ve landed on bills with Dum Dum Girls, Parquet Courts, Marnie Stern, and more. And for every dumb guy that likes them because they’re “hot chicks”—there are a dozen more who appreciate their fuzzed-out, ‘90s aesthetic and catchy punk nugs, that combine their constantly-evolving skills with a real sense of melody and sentimentality. 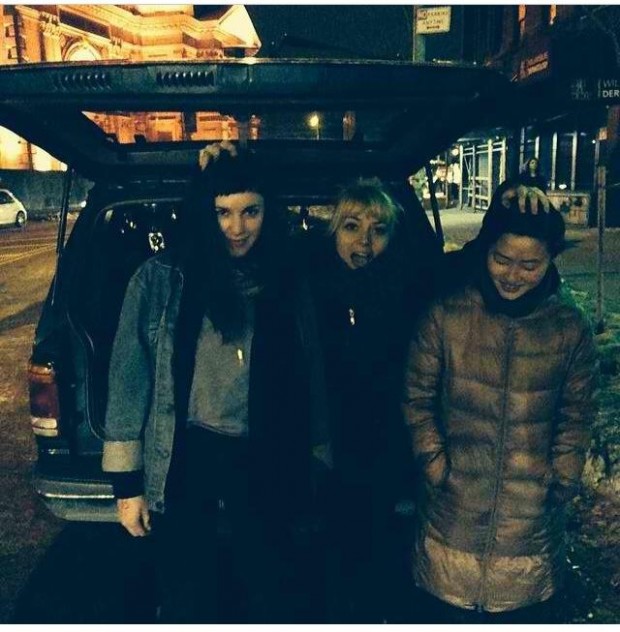 “When we first came together, I think to some extent we were treated differently because we were girls,” says Park. “But these days it’s not as much the case. I think there are a lot more girls playing music now—maybe because of programs like the Girls Rock Camp.”

Still, they occasionally meet people who think they’re doing this “to be trendy”—but try to ignore these people. “The best part about playing in Amanda X for me is sharing something that I love with Tiff and Kat,” remarked Park a year back, when I interviewed her for a piece on women in music. This remains true today.

Over the course of their career, Amanda X has garnered some true supporters, who have helped them find an audience—like Parquet Courts, who they played several shows with, and who invited them to their SXSW showcase last fall.

“They were definitely a big factor in us going to the festival,” says Park; Yoon adds that they were “set on not going,” but couldn’t pass up an opportunity to play with popular acts like Future Islands and DDG.

“I actually meet them a long time ago—my old band, Band Name, played with Teenage Cool Kids [featuring Andrew Savage of Parquet Courts] year ago,” she says. Since then, they’ve remained close, and Savage even thanks the ladies on the liner notes to their 2013 EP Tally All the Things You Broke.

Another big supporter is Tom Lax at Siltbreeze Records, who is releasing their debut LP, Amnesia, this August.

“The record wasn’t even done and we started getting these emails from people interested in putting it out,” says Park. “It was kind of neat—I’ve played in bands before where literally no one cared, so it felt very encouraging.”

The band appreciated Lax’s genuine interest in their sound, and were impressed by the label’s history, which has released classics from GBV, Sebadoh, and Times New Viking, in addition to kick-ass local bands like Far-Out Fangtooth.

“I was hanging out at Kraftwerk when I got the email that he wanted to release our record,” says Yoon. “And I was so excited I dropped my phone on the ground. They’re notorious taste-makers, so we are excited.”

Of course, Amanda X didn’t win this support over night—over the past 2 years, they’ve become road warriors, playing gigs across the country. They describe tour as “90% driving, 7% loading in, 2% setting up, and 1% actually playing.”

Prepping for tour is no easy feat either: “I worked 10 days in a row this past 2 weeks—more than 80 hours,” says Bean, who’s meeting me after a very long shift. “I have to work as much as possible between now and tour to save up as much money as possible.”

Some of the most memorable shows from past tours include stops at Detroit’s Trumbellplex, an “anarchist house” with good vibes, and Cleveland’s Happy Dog, where—they tell me—the guys “physically making our record” were in attendance. “They work at Gotta Groove Records, and were physically pressing the records,” says Park, adding that “once you start playing shows regularly, even regionally, the scene becomes really small, in a good way.”

But their favorite experience by far was a show in Pittsburgh, PA, which Bean describes simply as “Narnia.”

“We’re waiting for this show,” she describes, adding that perhaps another 5% of their time is actually spent “waiting for things to happen”—“and we go upstairs to this guy’s room. And he opens his closet, pushes the clothes aside—and there’s this rotted out wall, where you can see the original framing for the house. And behind it is this is tiny ladder…and we climb up the ladder and all of a sudden we’re on the roof with tons of people and this amazing panoramic view of the city.” She pauses.” It was just an amazing experience.” 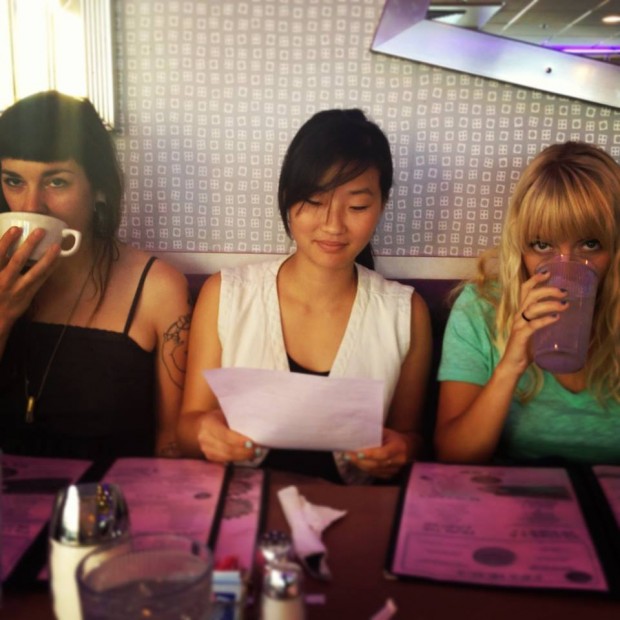 For now though, the ladies are back in Philly, although they’re headed out on another cross-country tour in mid-August. First though, they’ll celebrate their new record with a release show this Saturday at the Philadelphia Record Exchange, alongside PA three-piece Wish List.

The record was recorded by Jeff Zeigler at Uniform Recordings, an old friend of the band whose work they admire. “Everything else we’ve done has been recorded in our house,” says Park, who along with Yoon resides in Big Mama’s House, a Kensington warehouse which houses HeadRoom Studios. “We wanted to record with someone else because we wanted this to a be a project, not a hobby.”

The recording and mixing processes were done piecemeal, as the band earned money on tour, then immediately used that money for recording, then toured again, and used that money for mixing, and so forth. From the start of their career, the band has been very finance-conscious—for SXSW, they tell me, they all flew standby, spending about $100 round-trip each. “I actually got there about 15 minutes before our first set,” says Yoon. “It was rough.”

Rough or not, the ladies are not ones to be deterred, and are eager to see how things play out after their release show. “We’re not really on the national radar—yet,” says Park. “We’ll see how it all works out.”

We have a feeling these ladies will swim.