Tales of the Open Road: Get Real Gang leader Juston Stens on riding his ’72 Triumph cross-country to write and record Share the Road - WXPN

Tales of the Open Road: Get Real Gang leader Juston Stens on riding his ’72 Triumph cross-country to write and record Share the Road
Artists

Tales of the Open Road: Get Real Gang leader Juston Stens on riding his ’72 Triumph cross-country to write and record Share the Road

About 45 minutes before I’m supposed to meet Philly pop rebel Juston Stens for a poolside cocktail at North Shore Beach Club, I get a text: “Kate, I’m so sorry. My van broke down in South Philly. Should we reschedule?”

I’m headed back to South Philly myself, and his van just so happens to be near my neighborhood. So I tell him no worries, we can do the interview as he waits for a tow. It’s about 90 degrees out and by the time I reach him, he’s already been waiting 4 hours. “They sent a guy out already, but the trailer bed wasn’t big enough,” he quips, gesturing towards his monolith of a vehicle.

Considering how long he’s been waiting, he’s in a surprisingly good mood. He apologizes profusely for ruining our pool plans, then eagerly starts describing his new record. When the tow truck arrives, he chats with the driver, then helps push the van into a parking spot post-tow. “I work as a mover, part-time,” he tells me, unphased by its enormity. “This is nothing.” 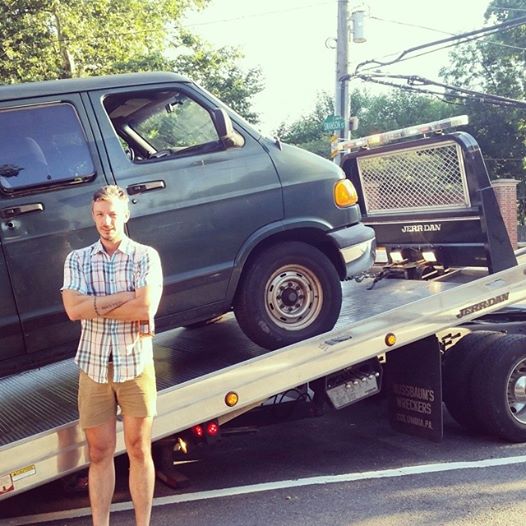 Broken down in South Philly. Via the author’s Instagram (@BookishKate)

The travel delays are nothing too; over the past 3 years, he’s experienced much worse as he traveled cross-country on a motorcycle, writing and recording songs for his new LP, Share the Road. A project nearly a half-decade in the making, Share the Road was written and recorded collaboratively with friends across the America, including Jessica Lea Mayfield, David Vandervelde, members of his former band Dr. Dog, Apollo Sunshine, Generationals, and more. It also inspired the documentary I Lay Where I Fall, which details the journey of our intrepid traveler, as he set off to find inspiration on the open road.

The project was first conceived a few years after his departure from Dr. Dog (he bowed out to focus on his own tunes), as he considered his next move. His first LP with The Get Real Gang—his name for a rotating cast of contributors—is an upbeat collection of vintage charmers, recorded in locales in North Carolina and Arizona. For his sophomore effort, he decided to up the ante.

“I started planning in early 2011,” he says. “I called everyone I’d ever toured with in Dr. Dog, trying to line up as many people as possible.” In the end, Stens recorded 15 songs with different contributors, which make up Share the Road and a bonus EP.

The choice to ride his motorcycle across the country was easy—“I’ve been riding since I was 19,” says Stens, now 37. Still, that doesn’t mean he was prepared for exactly what riding cross-country on a vintage 1972 Triumph would entail—which in his case, meant rain storms in Boston and Asheville, NC, plus wicked sand storms on the West Coast.

“On the first leg of my trip, I didn’t even have goggles,” he says, dead serious. “After the first rain, I of course bought them, and eventually I bought a rain suit.”

Otherwise, his belongings were limited to what would fit on his bike, and his back—“I bought two saddlebags, then built a bracket to affix them to the bike,” explains Stens, who is also somewhat of a master woodworker. “One side was filled with motorcycle gear, and the other side was filled with recording gear. Then I had a guitar mounted to the back of the bike, with a suitcase on top of it, and a backpack on my back.” 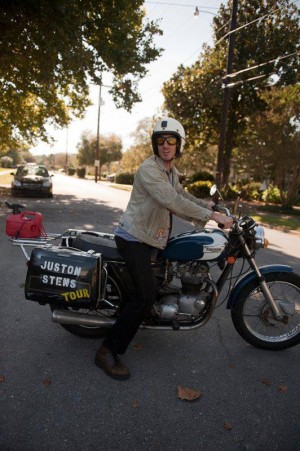 In Lafayette, LA to record with Brass Bed (photo via Facebook)

With such a rig, clothes were limited to the absolute essentials—two pairs of jeans, three tee-shirts, and underwear. “I threw out and bought new socks throughout,” he adds, noting that he reveled in the small measure of success that is being able to discard and buy new socks. For Stens, it’s all about the little things.

One of the most challenging aspects of the project was also one of the most exciting—that is, collaborating with a range of musicians whose styles may or may not align with your own.

“Before the trip I sent everyone rough demos of what I was working on, and asked them to pick a song that they felt spoke to them,” says Stens. “Some people did and others didn’t. Some didn’t even listen to the demos at all. At the end of the day though, both approaches were nice.”

Collaborators included both people Stens had long admired but never worked with before, such as Jim Eno from Spoon; others were long-time friends like Dmitri Manos of Dr. Dog and pal Bradford Trojan, the latter of whom, Stens tells me, he met circa 1995 when Trojan sent him a fan letter for his work in an New Jersey punk group. “I knew him since I was 17 but we had never recorded that much together,” he says. “So it felt like a homecoming, in a way.”

Stens describes the recording sessions as a mix of different energy levels; “one of the biggest challenges,” he says, “is that people would react differently to what I was doing. Some people would just jump into my shoes, uninvited,” he laughs—“and just start giving me their opinions about what I should do. And then other people were really reserved and would say ‘well, I don’t know, this is your project—what do you want to do?’ And I’d be like, ‘I don’t know either, but let’s go crazy!”

“Strange Love,” recorded with alt-country crooner Jessica Lea Mayfield, went through a massive transformation from rough idea to demo—“I started out a little awkward, because the last time I saw her [during tour with Generationals], our sound guy made out with her the whole night.” He pauses. “They’re married now though, so I guess it worked out.” He grins.

The tune—a breezy love song that pairs their vocals—was inspired by their time on the road together, and tells the story of two travelers who meet repeatedly in different cities across the globe. “It’s weird being in a band and visiting cities where you don’t know anyone—except for other artists who are also passing through,” says Stens, explaining the impetus behind the tune.

Other songs were recorded in true DIY fashion, complete with field sounds. “Blink of an Eye,” recorded with Nashville songwriter David Vandervelde, was completed as Vandervelde’s family was building a cabin in the Tennessee mountains; Stens hiked into the vastness and recorded the vocals alone with nature. “That was awesome,” he says. “You can hear the crickets chirping on the record.”

Share the Road was recorded August through December 2011; afterwards, Stens tells me, it took another full year to get everything formatted and ready for mixing. He ended up with just 10 tracks on Road because that’s how many would fit on a vinyl record. The rest will follow as a bonus EP.

The record is being put out digitally by Eschatone Records, a small label he was attracted to because they were really excited about the project. Limited edition cassettes are being released by Stens himself and include all 15 tracks.

“The hard thing about being in a band is trying not to disappear,” says Stens, who’s aware of the time lapse between his last record and Road. Still, he doesn’t regret his voyage one bit. “You invest so much into a project, you want it to matter,” he says.

Stens will celebrate Share the Road’s release this Friday, with a release party at Boot & Saddle.

“As far as I can tell, no one has made a record like this before,” he says. “I’m excited about it. I hope other people are excited too.”

Juston Stens and the Get Real Gang play Boot & Saddle on Friday, August 1. The 21+ show begins at 8:30 and tickets are $10; more information can be found via the XPN Concert Calendar.