King Britt, Dozia, Questlove and the Back2Basics family had a high-energy reunion at Hard Rock
Events

King Britt, Dozia, Questlove and the Back2Basics family had a high-energy reunion at Hard Rock

The first time I heard King Britt was over the sound system of the HMV on Walnut Street back in 2001. I knew of him via City Paper and Philadelphia Weekly stories about Back2Basics, the party he and DJ Dozia threw at Silk City (which I was never cool enough to attend). The song coming from the speakers was “Happiness” featuring Lady Alma, and it blew me away. I immediately walked over to the Dance section, found the album under his moniker of Sylk-130 titled Re-Members Only” and skimmed the track list and collaborators: Alison Moyet, DJ Jazzy Jeff, Kathy Sledge, Grover Washington Jr.

It was a love letter to sitting at home on a Saturday night and listening to stations like Power 99 who, back in the 80’s, would play everything from quiet storm to rap to Madonna. It’s an album that still is miles beyond most in capturing that time for listeners who missed out.

When I heard there was going to be a Back2Basics reunion, I was itching to go and finally experience what I never got a chance to back when the event was a regular thing. The night began with a percussion set accompanied by Dozia which led into a chill 90’s DJ set featuring SWV and Soul II Soul, among others. Yes…this is definitely getting good… 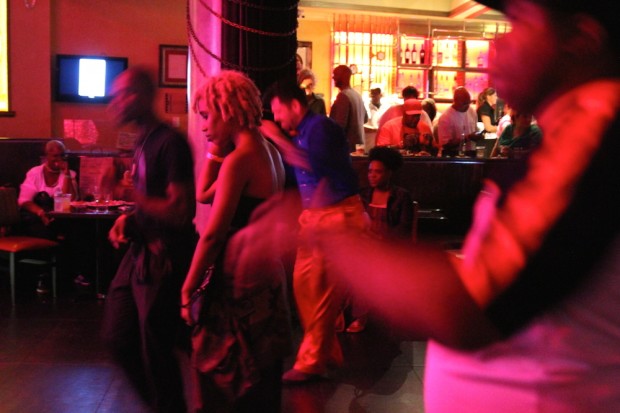 Then the main event got started: King Britt, Dozia and drummer Chuck Treece were joined by guitarist Tim Motzer, bassist Anthony Tidd, keyboardist Damon Bennett and trombone player Phil Jaeger. Once the band got in a groove, vocalist Tanja Dixon joined them for a cover of Alicia Myers’s “I Want to Thank You,” and Lady Alma did a searing version of “Happiness.” The DJs took center stage again spinning a 90’s house set: the highlights being La India / River Ocean’s “Love and Happiness” and the rarely heard “Good Thang” featuring Robyn.

The floor filled up and the crowd went nuts singing along. Looking around the room, I saw many excitedly hugging each other probably not having seen each other since the last time they took to the floor at Silk City. Others reconnected simply by dancing together, getting right back in the groove as if no time had passed.

The band reconvened and went back further in time jamming on the familiar riff of Michael Jackson’s “I Can’t Help It,” with DJ PHSH, Lady Alma and surprise appearances from Back2Basics regulars turned Roots crew members, James Poyser (also known for his production work with Lauryn Hill, D’Angelo, Erykah Badu and more) and of course Questlove.

Lady Alma’s scat singing and improv turned the song into something closer to a jazz standard. Tanja Dixon returned and both ladies delivered an amazing rendition of the Sylk-130 classic “When the Funk Hits the Fan,” and of course the dance anthem King Britt has made his own: Indeep’s “Last Night a DJ Saved My Life.”

It was a fitting ending to the live portion of the night as Britt name-checked many of his peers, influences and friends at the coda. The song served as a thank you to all of those who love music and who supported the eclecticism of the Philadelphia scene for the past 25 years.