Simply put – if you ever get a chance to see Brazilian ensemble PhillyBloco, don’t hesitate. Do it.

The 20+ piece local funk / samba ensemble – about 20 musicians, four dancers – headlined World Cafe Live downstairs on Saturday night, playing to a remarkably revved-up audience. Like the band, the crowd was extremely diverse in makeup. Men and women; old and young (it actually skewed very young, and I’d peg the median age at about 28); people of South American descent and people of all other backgrounds. Everybody. Part of what makes PhillyBloco so impressive, beyond its sheer instrumental skill – check out its Key Studio Session for some of that action – is how inclusive the group is, how it refrains from turning its celebration of Brazilian sounds derived from the Bloco tradition into either a dreary musicological lecture or some sort of weird other-ing exercise where you’re watching somebody else’s culture but you don’t feel welcomed to participate. On Saturday, everybody was part of the party – which is another thing that makes PhillyBloco stand out. On stage, the group looks like it’s having the best time ever.

An immediate illustration of those last two points – crowd inclusion, fun – was the opening of Saturday’s concert, where the band took the stage by marching through the front door of World Cafe Live downstairs, through the crowd dancing and in the midst of it. They rocked a fierce drum-line rhythm while band leader Michael Stevens kept the reins on the chaos, waving his hands and blowing a whistle. They took the stage for the first of two high-energy sets, mixing in versions of Brazilian faves like Skank’s “Garota Nacional” with covers of Galactic’s “Hey Na Na” and Paul Simon’s “The Obvious Child,” which Stevens pointed out was where many people heard Brazilian drumming for the first time. (The latter features an additional dozen or more drummers from Unidos Da Filadelfia, from which many PhillyBloco members emerged.)

Back to the central point: you should see them. The band announced a handful of new gigs at the concert, including a Halloween Show at Underground Arts on November 1st – I really want them to learn Sepultura’s “Ratamahatta” for this one – as well as a fourth year headlining World Cafe Live on New Years’ Eve, so you have plenty of opportunities. Get more info on the shows at the XPN Concert Calendar, and check out a gallery from Saturday night below. 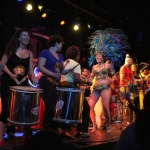