Made in America day one blasts off with Kanye West, The National, J Cole, Mayer Hawthorne and more
Events

Made in America day one blasts off with Kanye West, The National, J Cole, Mayer Hawthorne and more

This year’s Made in America festival kicked off yesterday with an exhilarating lineup of performers along the Benjamin Franklin Parkway. The day spanned 11 hours and a spectrum of genres, from the discofied openers in Cherub to the hardcore punk / metal of Glassjaw; EDM hitmaker Baauer to funky fresh hiphop vet Big Daddy Kane; sweet soul grooves from Mayer Hawthorne to an explosive set from The National. And of course, the man of the hour was Kanye West, whose closing 90-minute performance was at peak energy throughout.

The day’s highlights included a high-energy hometown set from local hip-hop duo Moosh & Twist, who played the Skate Park Stage at midafternoon for a packed audience throwing its hands in the air. Nearby, the expressive Mayer Hawthorne and his slick band played a sweet selection of cuts from last year’s Where Does This Door Go, mixing in a totally fun cover of Bell Biv DeVoe’s “Poison.” On the Rocky Stage at the Art Museum steps, The Neighborhood played a brooding set of poppy rock and roll bathed in black and white video footage.

Back at the Skate Park Stage, Pissed Jeans frontman Matt Korvette was sardonic as ever, demanding that the people riding the nearby halfpipe do flips mid-song. “We just got back from the Coors Light Made in Canada Festival, and I can already tell this is a million times better,” he said at the first break between songs. The band’s heavy-hitting thrash-punk wove nicely into an intense set from Long Island screamers Glassjaw.

J Cole was one of the day’s best. Opening his set by playing the audio from his new “Chains” over the PA and projecting footage from Fergusion, Missouri, on the screens, the North Carolina rapper stirred up a lot of emotions in the crowd before even stepping to the stage. Once he came out, it was tremendous – his raps are equally personal and introspective, political and incisive, and pure pop fun, and he is super skilled at working the crowd. Definitely an afternoon highlight. 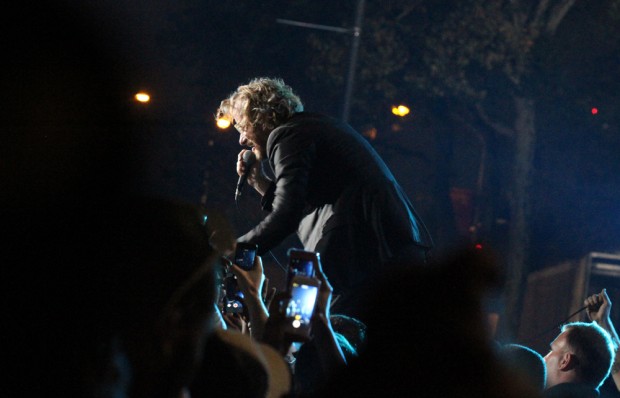 The National | Photo by John Vettese

The National‘s performance on the Rocky Stage followed the band’s usual progression – frontman Matt Berninger singing in a reticent stance at first, then building up energy as the worked across cuts from Trouble Will Find Me, Fake Empire and of course the knockout High Violet. By the time “Terrible Love” rolled around at the close, he had climbed offstage and was singing on the outstretched hands of the crowd – something he usually does, sure, but it was a unique wrinkle to see him doing it not just for National devotees but also people who had been holding their spot all day to see Kanye West and who, awesomely, welcomed this unexpectedly spirited singer with outstretched arms and hi-fives.

Kanye West’s performance took the energy higher still. The collective excitement of thousands was centralized at the foot of the stage, and the rapper / songwriter / producer / entertainer was at the top of his game, rushing out to the raging beat of “Black Skinhead” and running through a 20-song setlist at a rapid clip, working in nods to Foreigner and Chief Keef, a cover of Jay-Z’s “Run This Town,” throwbacks to “Jesus Walks” and “All Falls Down”…I could go on and on.

He asked the crowd to open up circle pits during “Blood on the Leaves” and later joked “We’re going to do some real underground shit on this next song,” West said directly before launching into the hugely popular “All of the Lights” to massive cheers and voices singing along to the hook. “Oh my god, you know this one?!” he cracked. “Mike, they know this one!”

Check out photos from Day One of Made In America in the gallery below. Day 2 kicks off at 1:30 today, and you can follow the action on the WXPN Instagram page.