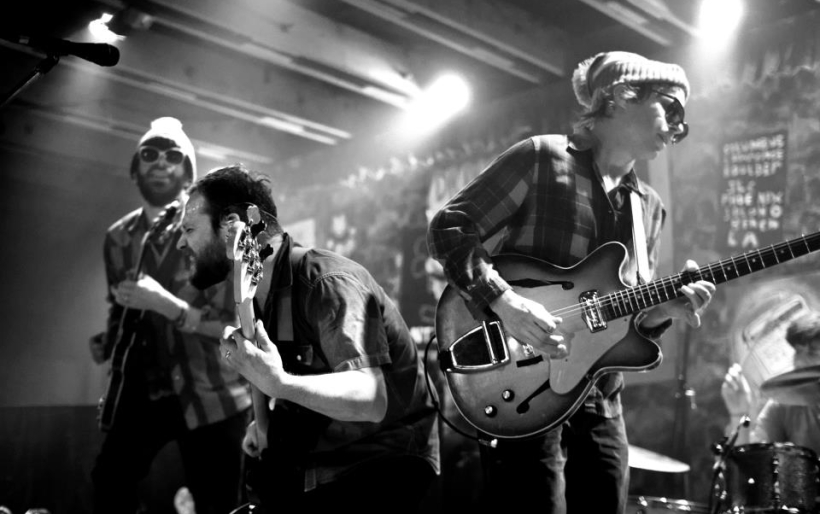 Songs are one thing that Dr. Dog isn’t short on. Before it broke out in 2005 with the Easy Beat LP, the band had a robust back-catalog of home-recordings that were available in varying forms – most notably 2003’s Toothbrush, still a cult favorite. But even today, their records come in accompanying deluxe editions, containing usually an EP’s worth of extra material that handily holds up to the the stuff on the album proper. And it’s not like this is stuff that you’ll never hear anywhere but the iTunes library of the Dr. Dog completist – the band is known for digging deep into the vaults in setlists. For today’s installment of the Dr. Dog Days of Summer, here are ten essential deep cuts from the Dr. Dog vaults – any or all of these would make totally sweet inclusions at the band’s Lawn of Mann show this Saturday.

“Nobody Knows Who You Are” – You’re probably heard this one; the guys play it in concert a lot. It’s an uptempo tambourine-shaker from the deluxe edition of Shame Shame that starts in the middle of a rambling jam with sweet harmonica and organ accents; Scott McMicken somehow turns the phrase “I must’ve lost a lot of blood” into the catchiest hook ever.

“I’ve Just Got To Tell You” – When Dr. Dog got signed to Park The Van records in the mid-aughties, they released a solid EP called Takers and Leavers; some of it’s tracks (“Ain’t It Strange,” “Die Die Die”) ended up on their We All Belong album, but this one didn’t. Its bouncy beat and “ohhh wop wop” harmonies are pure infectiousness. I’d liked many Dr. Dog songs prior, but this was the first one I loved.

“What A Fool” – Toby Leaman is in many ways the soul of Dr. Dog. While his songwriting partner McMicken’s takes more of the philosopher-dreamer’s outlook on his half of the tunes, Leaman is grounded in raw and expressive human emotion. His rich baritone glides on the sensitive parts and rasps on the angry parts, and on this selection from the band’s Wild Race EP, he lyrically presages on of his best songs, from last year’s B-Room: “I’ve grown so used to it in time / that a broken heart is fine.”

“Say Ahhh” – Ah yes, the aforementioned Toothbrush. This is an interesting one in the Dr. Dog catalog; it’s the album that even the rock snobbish Pitchfork-borg – the dudes and dudettes who can’t bring themselves to enjoy the crowd-pleasing jams on Shame Shame and Fate – even they have to admit it’s a pretty cool record. “Say Ahhh” has a trippy bossa nova / jazzy feel, and when the band plays it nowadays, it’s completely reinvented. At the Electric Factory earlier this year, I mistook it for a Stan Getz cover, it was so spectacularly jammed out.

“Control Yourself” – The guys get mostly pegged as 60s psychedelic aficionados, and that’s certainly not an inaccurate reference point. But it’s also just that – a reference – and this delightful Scott song from the deluxe version of Be The Void shows that the band probably listened to as much Cheap Trick growing up as they listened to The Beatles.

“Can’t Remember” – This is a Toby song from the B-Room sessions that totally swings. Whereas that last album was centered around a tightly focused rock sound, this tune hearkens back to the early carefree pop of the We All Belong days in bouncing piano chords and the oohs and aaahs that comingle with Leaman’s howl in a Harry Nilsson-esque way.

“Alaska” – Speaking of Leaman, and We All Belong, this simmering slice of blue-eyed soul is easily one of my faves from the Dr. Dog canon. For one thing, he manages to sing all five syllables of “Philadelphia” without sounding in the least bit awkward – this is, I’ve always felt, a difficult obstacle faced by our city’s songwriters who want to, well, sing about our city – but the song also builds into a great chorus with a sick guitar solo. Love the line “The dog is barking out back / he thinks he’s in the band.”

“Eyesing The Blues” – This fuzzy acoustic guitar / uke / accordian jingle is another one from the surreal home-recorded early days of Dr. Dog; I’m not sure what release it was originally on, but nowadays you can find it on the Passed Away Vol. 1 compilation. It sort of reminds me of “Wouldn’t It Be Nice,” and it has a voice we don’t get to hear enough of – lead guitarist Frank McElroy does lead vocals on this. 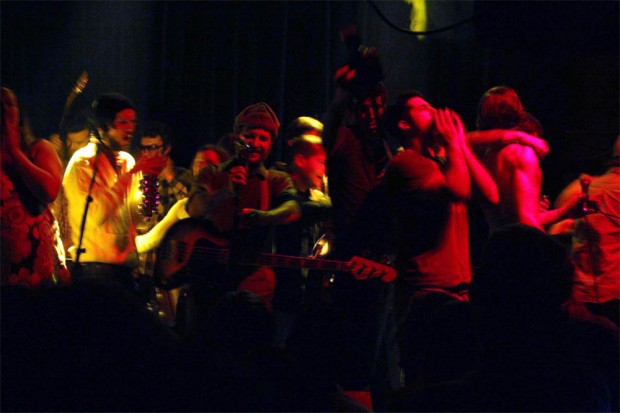 Dr. Dog and a buttload of friends onstage at Johnny Brenda’s in 2007 | Photo by John Vettese

“Wake Up” – Okay, so this isn’t necessarily a deep cut if you’ve been following Dr. Dog for long enough. It’s the closing number on Easy Beat, they used to play it at every single show, and I have a wonderful memory of seeing the band’s album release party for We All Belong at Johnny Brenda’s in 2007 (pictured at left), watching them bring every single one of their friends in the crowd onstage to join a giant singalong on the final refrain. “Wake up, wake up, wake up / we are only part of a dream / All the things in your heart / like the things in your head / are only what they seem.” Pure existential celebration vibes.

“What A Strange Day” – Just proof that Dr. Dog can idea as simple as “Hey, here’s a strange song I wrote today” and turn it into a totally fleshed out, thoughtful, introspective and personal statement. This beautiful acoustic number from Scott is another one from the Shame Shame sessions.

Listen to all ten of these songs in the Spotify playlist below, and be sure to follow our Dr. Dog Days of Summer series all week long as we get pumped to see the guys headline the Mann Center Skyline Stage on Saturday night. (Tickets and information on that show can be found at the XPN Concert Calendar, or possibly won at the XPN Facebook page.)